The Importance and Meaning of High Stakes in Screenwriting

“So what? Why should we care?”

High stakes can benefit the story in many ways, they:

However, characters are still often weak and the story can feel flat. One reason for this is because the writing lacks bravery.

For as we will find out, the creation of high stakes when writing a script takes courage of imagination.

“In Literature, only trouble is interesting.”

It’s ironic that humans should be so skilled at creating trouble in the real world, yet, when it comes to the fictional world, writers have a tendency to hold back and be on their best behaviour.

We are, of course, hardwired to avoid conflict. It’s a matter of survival.

Therefore, getting over this natural instinct to avoid generating conflict will take practice. Give yourself permission to enjoy the discovery of embracing your inner rascal.

Become the kid playing with a magnifying glass, standing over an ant hill. You have Kurt Vonnegut’s permission:

“Be a sadist. No matter how sweet and innocent your leading characters, make awful things happen to them – in order that the reader may see what they are made of.”

Practice finding the stakes in the movies you watch from now on. You don’t have to look far. The stakes will be present in the controlling idea of the premise and logline of most great stories.

Let’s look at some IMDB loglines from five films where the stakes are very high:

In 1984, a human soldier is tasked to stop an indestructible cyborg killing machine, both sent from 2029, from executing a young woman, whose unborn son is the key to humanity’s future salvation.

A young police officer must prevent a bomb exploding aboard a city bus by keeping its speed above 50mph.

After earning 00 status and a license to kill, Secret Agent James Bond sets out on his first mission as 007. Bond must defeat a private banker, funding terrorists, in a high-stakes game of poker at Casino Royale, Montenegro.

A dramatization of the July 20, 1944 assassination and political coup plot by desperate renegade German Army officers against Adolf Hitler during World War II.

April 6th, 1917. As a regiment assembles to wage war deep in enemy territory, two soldiers are assigned to race against time and deliver a message that will stop 1,600 men from walking straight into a deadly trap.

Ask yourself these questions:

Let’s answer some of these useful questions with THE TERMINATOR and VALKYRIE as examples.

Doing so will help us to explore how high stakes impact the main character and affect the story world around them. The process does not need to be complicated. Keep it simple.

This is a stage that will occur in the second half of Act II, between the 50% and 75% point of the story. Hauge notes that at this stage, the movie raises and intensifies the stakes.

“A rival boyfriend might show up, or the villain discovers that the hero is onto him and the pursued is going to become the pursuer.”

We can get a better idea of these obstacles in action by familiarising ourselves with complications that arise in THE TERMINATOR, in which the stakes are a primal matter of life and death.

6 Tips for Raising the Stakes

In order to keep the viewers engaged, push the conflict as far as it can go.

One exercise to assist you in generating conflict and high-stakes is the creation of a list.

After the timer goes off, decide which complications, stakes, and conflicts are relevant to your character.

Now put them in an objective hierarchy regarding their level of importance.

High-concept genre movies have a tendency to focus on the spectacle of external conflict, as opposed to the intimacy of smaller, character-focused stories.

By making the external high-stakes affect the main character on a more personal level, writers can achieve the best of both worlds – consequently, attaching greater meaning to the already important stakes.

Furthermore, don’t forget about the other characters. They may not be as charismatic or interesting as the main character.

By giving each character a central problem, which impacts the protagonist‘s journey, you will give them a sense of purpose in the story and avoid them becoming two-dimensional.

A masterful example of the supporting character who fulfils his own character arc, whilst playing an integral part in the main character’s journey, is Sgt. Al Powell in DIE HARD:

Increase the stakes by incorporating a third member into the central conflict. The triangle of conflict requires:

Protagonist – the leading character (sometimes characters) of the story.

Antagonist – a person who actively opposes or is hostile to someone or something; an adversary.

Stakes Character – the person that the protagonist and antagonist are in competition for.

The Stakes Character personifies the story objective and that which is at stake for the main character. Let’s again look at some examples: 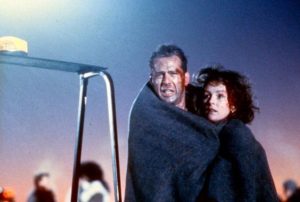 Introducing a story limit is a useful tool that provides the audience with information regarding two elements:

Writers can achieve this through one of two ways. By answering the question:

Is the story option locked or time locked?

Either the main character runs out of options or time.

Furthermore, tension can be increased with dramatic irony by having certain characters unaware of a ticking-clock, which the audience is aware of.

Ask yourself… “who knows what and when do they know it?”. How can this be used to escalate the stakes for both the characters and the audience.

Consequences are often associated with negative connotations. But they can also be positive.

Positive consequences and small successes will, in turn, also have their own consequences and will affect the external world. Be mindful of the push/pull dynamic following the events onscreen.

In addition, it is worth remembering that real people make mistakes. Therefore, the characters in a story should also make mistakes.

They are not perfect beings. That is to say, if they are to be convincing they should be flawed in some way. Therefore, they won’t always get things right.

Characters must stand to win or lose something in each scene.

It is not always the case, however, that there must be a protagonist vs. antagonist in every scene. Just so long as there is something at stake.

If you can tell your character’s story at a life-changing moment the high-stakes will automatically be higher. This will also further engage the audience in the stakes. 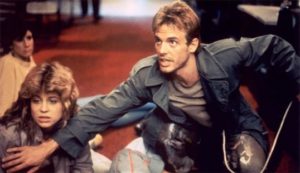 This will put you one step closer to achieving the goal of compelling the audience to stay emotionally invested and to give meaning to the high-stakes of your story.