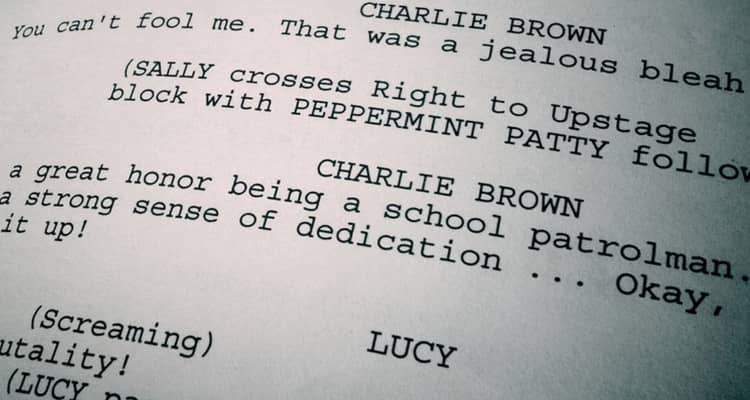 Screenplay Font – Does It Matter?

This article will explain what the industry-standard screenplay font is.

As well as explaining what it is, we’ll look at the reasons why this is font holds the title of the industry-standard font for screenwriters and filmmakers alike.

Additionally, we’ll explore the possibility of whether there are any exceptions to this font in screenwriting.

The correct font is the first impression someone has of your script before they read it. Getting the font wrong could mean your script isn’t even accepted, let alone read.

To give yourself and your script the best chance, it is important to get this right…

Fortunately, there is a relatively simple answer to this question.

The industry-standard font is Courier 12.

As the guideline is rigid, the answer is straightforward.

There are several variations of Courier: some of which are accepted as an adequate screenplay font. We’ll explore some of these variations later on.

The Courier font is styled on the print that comes from a typewriter. So, screenwriters type their scripts in a font that has its origins all the way back in that, now old-fashioned, tool for writing.

The fact that it is modelled on this more or less unused writing device shows how long this font has set the standard.

With that in mind, you can safely assume that the industry standard screenwriting font is not something that will change suddenly and regularly. So, get used to writing with it. 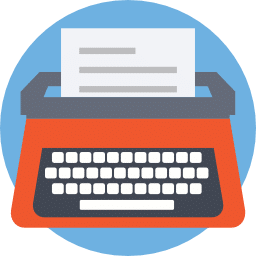 The Courier Font has a number of variations. While several variations of Courier 12 are accepted as industry standard, it is worth remembering that they are the variations, so they do not set the standard. Use them with caution.

As this software sets the industry standard for the correct formatting of scripts, it is a well established and trusted font.

**Check out our ultimate guide to paid and free screenwriting software**

Courier Final Draft allows for fifty-five lines on each page. This is aimed to align itself with the screenwriting rule that a screenplay page should roughly equate to one minute of screen time.

With close attention to details like this, it is a useful and popular variation of the Courier 12 font. 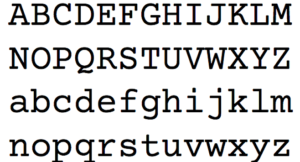 As we have briefly mentioned, a rule of thumb for a screenplay equates one page to one minute of screen time. Without the correct font, screenwriters may struggle to accurately adhere to this guideline.

A script reader has to sift through a huge amount of scripts. Being so immersed in the discipline, script readers spot errors very quickly. Make sure you avoid that pitfall of standing out for the wrong reasons.

Standing Out For The Wrong Reasons

Formatting a script correctly is a challenge for any screenwriter. Luckily, there are many paid and free screenwriting software options which cover a lot of the heavy lifting for us.

Using these to your advantage will help you avoid the pitfall of producing an unprofessionally formatted script.

If you’re pitching a TV Show and your screenplay font is not industry standard, you’re immediately hampering the chances of that TV Show being picked up.

Executives and agents deal only in industry standard work. Anything below that standard will immediately be outed as unprofessional.

Make sure your script stands out because of its originality and its skill, rather than because it looks like a poor attempt at replicating the industry standard format. 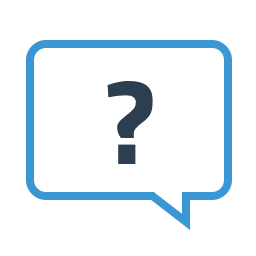 “I Find Courier 12 Too Small To Write With”

There’s no use using Courier if you’re going to format it in a size other than 12. Maybe while you’re writing it’s easier to make the font larger. However, this will alter the structure and shape of your script once you reformat it back into the industry standard size.

Our advice is to zoom in on the screen instead of making the font larger. That way, you’ll continue formatting the script in the industry standard font. In turn, this will prevent any reformatting problems from occurring once you’ve written your script.

“I Don’t Use Screenwriting Software, I’ll Just Use Word”

This is a great way to get familiar with the correct screenplay font. There are many access points for downloading PDF documents of famous screenplays. The BBC Writers Room is just one example. However, we will go into more detail about accessing screenplays in our advice section below.

If you’ve used Courier 12 for your screenplay, you might be satisfied in thinking that you are following the industry-standard. Yet, there are other formatting rules which are equally as rigid when it comes to writing a screenplay.

Having the industry-standard screenplay font alone will not satisfy the other formatting demands.

Before you begin writing, there are necessary steps to setting up your document. Fortunately, we’ve put together a 30-Step guide for formatting a screenplay to cover some of these big questions.

**Our 30-Step Guide to Formatting a Screenplay**

Clearly, a lot goes towards formatting a screenplay to the industry standard. To give you a taste of the necessary planning and organisation, we’ve included the nine steps that go into preparing a document:

Before you begin writing, each of these steps has to be set out and planned methodically. Clearly, the screenwriting font plays a crucial role, but not a role in isolation from others.

Formatting a screenplay to industry standard requires you look beyond the font to other demands. As we have already suggested, many of these demands are covered by screenwriting software to make your life easier. 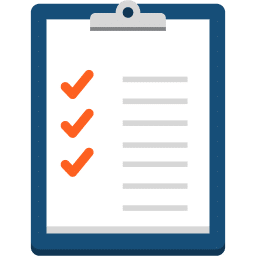 There are many sources to access guidance for formatting a screenplay. If you are overwhelmed by the task of formatting a script, our main piece of advise is to look at professional examples.

This will make you familiar with the standard for details ranging from the screenplay font to the position of page numbers.

The BBC Writersroom lets people download scripts in their entirety. If you want to see a correctly formatted screenplay, this is a quick and easy way to see how everything should look.

From the font to the margin space, this source will provide useful examples for replicating the industry-standard.

Daily Script is another service which offers people a chance to download scripts. Users get access to both TV Scripts and Movie Scripts. Being able to see both will help screenwriters to hone their formatting skills.

Possessing the correct screenplay formatting knowledge does not substitute for bad or undeveloped content.

We know there is a lot to consider for the formatting side of a screenplay. That is why we devised our 30 Step Guide to formatting a script.

However, having the right screenplay font, margin measurements, and screenwriting software, is nothing without the right ideas.

It is vital to divide your head space between formatting a script and the quality of writing within it. Questions of narrative momentum or character development need considerable attention aside from issues of formatting.

Fortunately, we have put together a detailed guide which tackles the question of narrative momentum. Getting the industry standard font will not matter without careful attention being paid to questions of writing craft, just like this one.

Think of industry-standard formatting as an opportunity to boost your confidence.

Getting some quick and easy success in the formatting process, like getting the industry standard Courier 12 screenplay font, will allow you to build confidence before you start writing. 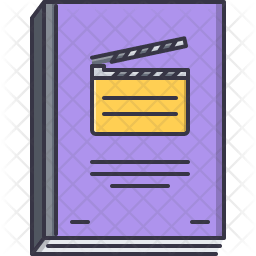 We’ve talked a lot about the necessary steps involved in screenwriting generally. The industry-standard screenplay font has acted as a springboard to talk about the writing process.

In fact, this is revealing because it shows how important small details are in a screenplay. A successful screenplay is not accurate and professional in parts.

Instead, a successful screenplay is successful when it is wholly accurate and wholly well formatted. Starting with something small, like the screenplay font, sets the tone for the success of the screenwriting process.

The takeaway points to consider are as follows:

Build your confidence by getting the font right. It is an easy way to begin the screenwriting process the right way.

2 thoughts on “What is THE industry-standard screenplay font?”