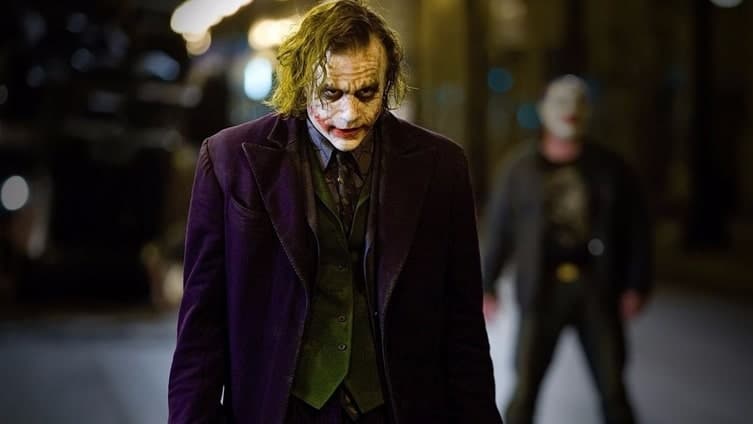 Creating an Awesome Movie Villain for your Screenplay

In this article we’ll look at different examples and tools for creating believable movie villains. In Writing Screenplays that Sell, Michael Hauge writes that the villain, or “nemesis” –

…is the character who stands in the way of the hero achieving his or her outer motivation.

Villains are the hero’s greatest source of conflict. In addition, villains play a vital role in developing the story’s plot, character arc, and theme.

However, writers often fall into the trap of writing villains as pure evil characters. These two dimensional villains seem underdeveloped due to absent values.

They may also lack internal conflict or desires. In turn, this causes the story to become flat and predictable.

So what makes a good movie villain? Why are characters such as The Joker from THE DARK KNIGHT or Hans Landa from INGLORIOUS BASTERDS so enjoyable to watch?

This doesn’t mean writing villains as humans. On the contrary, a compelling villain has qualities which make him or her feel human. Regardless of genre, good movie villains often possess —

These qualities cause villains to act immorally and unjustly. However, believable villains never see their actions as “immoral” or “unjust.”

Often, a believable movie villain’s qualities are due to unjust treatments or internal conflict from their past. The writer might also use symbols or flashbacks to show these struggles.

Loki is the story’s main villain. He is the adopted son of King Odin and Thor’s brother. He also possesses admiring traits such as compassion towards Thor.

However, tension soon grows when he realizes he was adopted by King Odin from the Frost Giants (internal struggle). He views his adoption as nothing more than a tool: a pawn to build a friendly alliance between the two forces.

Consequently, the audience learns about Loki’s villainous nature. This can be seen in two ways.

He’s not evil for no reason. Rather, his immoral actions stem from a feeling of inferiority (weakness). He feels that he can neither be as great as Thor is, nor a worthy son to his father.

Loki’s actions connect back to this internal struggle again and again throughout this Marvel series. 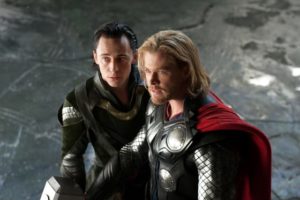 Another example of a movie villain who feels human is Gollum, in —

LORD OF THE RINGS

Like Loki, Gollum is not pure evil either. He’s an interesting and believable villain because of his internal conflict.

More specifically, he possesses a poisonous thirst for power. Greed takes over his entire being. And in the opening of LOTR: THE RETURN OF THE KING, we see this greed overwhelm him in the movie’s prologue.

Notice how many of the fantasy / science fiction movie examples above still are able to make their villains feel human. Even if they don’t exist in the real world.

When developing your movie villain —

A character that is fully developed never acts or speaks randomly. His or her dialogue and actions are based on values and beliefs. Believable movie villains also act in relation to their own system of values.

Additionally, the villain’s values are always in conflict with the hero’s values.

It’s what makes the battle between the hero and the villain so gripping.

Let’s take a look at the Joker in —

The Joker sees himself as an “Agent of Chaos.” At first glance, this may seem to be a surface level, evil notion. But the Joker informs Batman of his values, which are the reason why he seems crazy.

In the interrogation, Joker’s moral argument with Batman is that he’s ahead of the curve.

“Their morals, their code; it’s a bad joke. Dropped at the first sign of trouble. They’re only as good as the world allows them to be. You’ll see. I’ll show you. When the chips are down these, uh, civilized people? They’ll eat each other. See I’m not a monster, I’m just ahead of the curve.”

In other words, it’s not an accident that the Joker values chaos. Rather, the Joker commits to proving that the people are just as crazy as he is when the world allows it.

As mentioned above, no believable villain acts for no reason. Nor does a realistic villain ever see himself as a “bad guy.” In fact, the Joker makes this clear in dialogue early on in the movie.

Similarly, Hans Linda also follows his own set of values in —

WW2 movies tend to show Nazis as cartoonish, evil characters. However, using this notion only deflates the character and the overall story. Instead, Quentin Tarantino writes values for the movie’s villain to follow.

The first major scene of the movie masterfully introduces the audience to his beliefs.

Known as “The Jew Hunter,” Landa embraces his nickname because it’s his job to capture runaway Jews. Later in the movie, he affirms his role to Aldo.

Col. Hans Landa: A detective. A damn good detective. Finding people is my specialty so naturally I work for the Nazis finding people, and yes some of them were Jews. But “Jew Hunter”? It’s just a name that stuck.

Hans doesn’t see himself as a despicable character (though the audience definitely will and should). He views his role as a necessity.

However, all that changes when he shows a willingness to surrender.

Here, Landa shows that his values have changed. This change in values also creates an interesting character arc for Landa, with a new plot twist. Hans proves himself even more of a villain, by showing his only real values are about protecting himself.

Used properly, values and beliefs can enrich these villains to make their “immoral actions” feel justified, at least to them. They can also be a great tool for showing a villain’s character arc.

A good movie villain’s actions are guided also by a sense of justice.  In other words, the villain pursues his or her goal based on an internal purpose, or internal motivation.

Though misguided, his or her sense of justice is never entirely wrong. Nor is it entirely right.

Take a look at THE DARK KNIGHT again. Only this time, let’s focus on Harvey Dent.

With the Joker as the movie’s main villain, it’s easy to forget Harvey Dent’s (aka Two-Face’s) compelling arc into one of Batman’s greatest villains.

Harvey Dent’s new false sense of justice becomes vengeance. His internal motivation is based on violently avenging Rachel’s death by returning the favor to all those who were responsible.

Christopher Nolan uses Harvey Dent’s coin as one of many symbols to represent his internal motivation.

Dent bares some similarities to another villain, Anton Chigurh, in the movie —

NO COUNTRY FOR OLD MEN 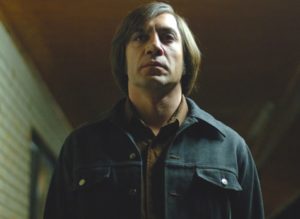 Chigurh is introduced as a violent killer when he escapes arrest in the opening scene. For the rest of the movie, Chigurh uses a bolt stunner to kill innocent people.

However, it’s unclear throughout the film what Chigurh’s internal motivation is.

But again, these are just side characters’ opinions. They do not define Chigurh’s true internal motivation.

Many times, he takes peoples’ lives without remorse.

However, that’s not always the case. He sometimes gives people a chance to live. He does this either by flipping a coin, or prolonging their lives long enough to hear them out.

The seeming randomness of Chigurh’s method makes him even more terrifying.

Tips For Establishing a Flawed Sense of Justice

Both above examples leave writers with templates for establishing internal motivation, or a flawed sense of justice. One is clear (Two-Face) and the other is more ambiguous (Chigurh).

Here’s how you can use them in writing your script.

In following these steps, your movie theme also becomes clearer.

Here’s an example of Harvey Dent arguing his sense of Justice to Batman and Gordon. This takes place at the most climatic moment of the movie.

Batman: (appearing from the shadows) You don’t want to hurt the boy, Harvey.

Two-Face: It’s not about what I want! It’s about what’s fair! You thought we could be decent men in an indecent time! But you were wrong. The world is cruel. And the only morality in a cruel world…(pulls out his coin)…is chance. Unbiased, unprejudiced, fair. His son’s got the same chance she had: 50/50.

Two-Face simultaneously combines his dialogue about his internal motivation with his action. He gives each character in the scene a 50/50 chance to live, just like Rachel.

Use similar combinations of dialogue and action in your script!

A believable movie villain also has an outward goal that mirrors, or is similar to the protagonist’s goal.

Not only is conflict inevitably promised. But also, a compelling clash of ideals takes shape in every battle.

Let’s look at another Marvel example —

The Avengers’ goal in INFINITY WAR is to save the universe by stopping the movie’s main villain, Thanos. The Avengers agree to destroy the Time Stone. Meanwhile, they also fight back against Thanos’ followers.

The aligned goals bring about compelling battle scenes. Most importantly, the conflict enhances in meaningful ways given the villain shares the same goals of the heroes.

But the twist in Thanos’ path presents a moral dilemma on both sides.

Its up to the Avengers then to stop him at all costs.

Mirroring goals exist in another example too —

Luke Skywalker is the movie’s hero. He seeks to save the universe from the Galactic Empire, led by Darth Vader. As the movie’s main villain, Darth Vader attempts to destroy the rebel alliance.

Both Luke and Darth Vader’s goals vary. Nonetheless, they each are connected in their desire to maintain control of the galaxy.

Eventually both their goals deviate.

Once again, alliance becomes the mirroring goal between both Luke and Darth Vader.

Ironically, the same is true for Kylo Ren and Rey, which manifests in THE RISE OF SKYWALKER.

The mirroring of goals helps to keep the villains real and believable. After all, their goals are the same of the heroes.

The difference for the villain is that his or her goals are guided by different values and internal struggles.

Above all, believable movie villains are more than just evil characters.

They are human, with their own internal struggles, flaws, and values. Often, they desire the same goals as the hero of the story.

However, how they seek to achieve such goals is often to what makes them a villain. The ruthless pursuit of their goals at the expense and ignorance of others, can turn them into an enemy that needs to be defeated.

By making your movie villain as well developed as your protagonist, you set up the potential for compelling conflict.

Moreover, a villain the audience recognizes in themselves or others can be the most terrifying one of all.