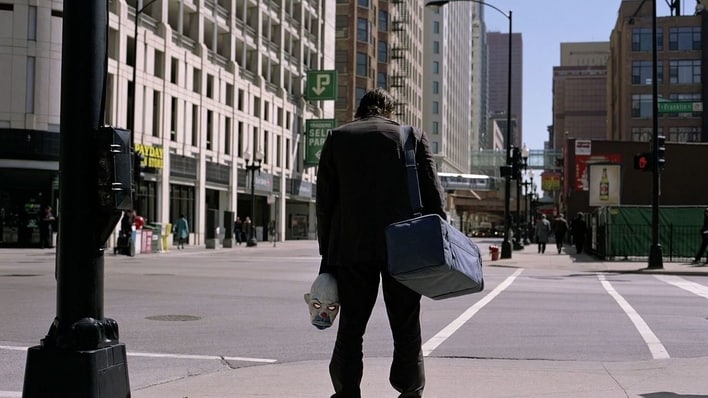 A prologue can be used to introduce the audience to the characters, tone and theme of your screenplay. It should plummet them into the story from the start as you set the scene. But are prologues necessary? And what are the pros and cons to having one in your screenplay? In this article, we will look at examples of prologues in TV and film, and the key elements of writing an effective prologue.

What is a Prologue?

A prologue is a scene that introduces the audience to the story at hand before it starts in actuality.

Prologue: a separate introductory section of a literary, dramatic, or musical work.

A prologue can be used to establish context, foreshadow the plot, or introduce a thematic tone. It doesn’t necessarily have to connect to the main story, at least not upfront. Its purpose is to set the scene more than it is to start the story.

Furthermore, there is a difference between a prologue and an opening scene or cold open. Primarily, the prologue will exist on its own two feet. It has a beginning, middle and end in this sense. It’s not necessarily something that will be particularly important to the plot. It’s a mini-story in its own right.

Following the prologue, the story will start in earnest. So the prologue is an opportunity to lubricate the script’s opening. It gives the audience a taste of what is to come, getting them ready for the story, tone, characters or context of what they are about to watch.

How Do You Write a Screenplay Prologue?

Writing a prologue can be a tempting way to start your script. It’s an easy way to begin the story with a bang and pull your audience in. After all, those opening pages are vital for gripping and maintaining attention in a crowded, competitive marketplace.

However, in its ease, it can also be an overused device. Screenplay readers will often tell you that a script that starts with a prologue can be a red flag. It can feel like too much of an obvious way to grab the reader’s attention, in lieu of the script starting in a genuinely gripping manner within the confines of the story.

So there are some key ways to make sure your screenplay prologue has a purpose. This will make the reader forget about any preconceptions they have about prologues. Instead, it will grip them into the story in a genuine and convincing way.

1. Focus on a Single Character

Introducing too many characters at once can be a disorientating way to start a script. So instead, focus on one character in the prologue.

This doesn’t necessarily have to be the protagonist. It may be, for example, a narrator who, in turn, introduces us to the story and the important characters we are about to meet. It may even be the story’s antagonist.

Either way, making sure the prologue is from one character’s perspective is important in starting the story with clarity. Even if there are lots of characters within this opening scene, there needs to be a character that defines it. And this definition needs to make sense for the upcoming narrative.

Another key way to reign in the scope of your prologue and maintain clarity is to restrict the locations. You don’t want to take your audience to a host of different locations in the opening few pages. This will give them too much to orientate themselves around. So try and keep the action to one location, if possible.

Moreover, make sure that location has some kind of weight, significance or distinction. You want to start the script with vibrancy and relevance and not in, for example, a bland location with no meaning.

These are key ways to make sure the location is an important and not incidental part of the prologue. It may not be a location you return to within the story. But it still needs to have depth and meaning to the overall story. Not doing this weakens the strength and purpose of the prologue.

3. Make the Prologue a Mini-Story

Does the prologue have a beginning, middle and end? Could it exist on its own two feet without being connected to the main story? These are the key questions to ask when defining whether your screenplay prologue is worthwhile and purposeful and not just a convenient way to start the script with a bang.

You almost need to think of your screenplay prologue as its own short film. Could the prologue stand up without being directly connected to a wider story? If the answer is no then the prologue probably isn’t strong enough to justify its inclusion.

Now, it’s fine to accept that this short film might leave the audience wanting more. But is it still a short film with a distinct beginning, middle and end? Are there questions posed and answered? This is key to making the prologue robust. You want to tell the audience a mini-story as a starter to the main meal. It’s not going to be as filling as the main meal. But it’s still serving its purpose in fulfilling an appetite.

4. Don’t Use the Prologue Purely as Exposition

The reader and/or audience will likely be put off by a prologue that simply overloads the scene with exposition. This feels too much like a transparent way to convey the important points about the plot, characters or setting to the audience without having to actually do any dramatic legwork.

There are a few key ways to avoid this being the case:

1. Don’t overload the scene with dialogue.

2. Establish tone as well as story.

The theme should essentially be the prologue’s defining element. Establishing this is really its fundamental purpose. As much as the prologue can be an opportunity to establish characters and setting, the story’s overall theme should be the guiding motive.

This is the objective of the short film within a larger film. It’s a short story about the central theme. Whatever else the audience gets out of the prologue (tone, character, setting), the theme should be the main taste they’re left with.

So how does the prologue establish the theme? What does it say about the film’s central premise? The audience might not necessarily grasp this straight away. But in retrospect, the audience will realise that the prologue set out the story’s central idea in no uncertain terms.

Finally, a simple rule to follow. Your audience will lose interest if your prologue is too long and overflowing with information.

So keep the prologue short and sweet. A prologue that goes on for too long will make the audience feel that this is the story they are watching, instead of it just being an establishing preamble. And then when you actually start the story, they’ll have to readjust.

You want to give your audience enough time to enjoy the scene and get something out of it, but not too much that they become settled into it. Again, think of the starter and the main meal. Don’t spoil the audience’s appetite by giving them too much as a starter! Instead, just whet their appetite so they have some idea of what they’re in for.

Examples of Prologues in Film and TV

We have gathered a few examples of film and TV prologues that effectively inform the readers of their story and what’s to come.

The Dark Knight uses an exciting prologue to establish a few key elements of the film that is to come.

The opening scene of The Wire‘s first season perfectly establishes the series’ defining theme and tone.

This line sums up The Wire‘s guiding principle; the idea that in America everyone is given the chance to play, even if the game itself is rigged. It’s an engaging exchange within a vivid, rich context. And it’s one that resonates throughout the show’s five seasons.

Raiders of the Lost Ark

Raiders of the Lost Ark brilliantly uses a prologue to introduce us to the titular character and the film’s tone.

Moreover, the way in which this prologue is such a rip-roaring adventure illustrates the tone of the upcoming film. There’s no doubt as to the kind of film this will be in terms of its tone and genre. Everything is there in the prologue – adventure, humour, peril, a vibrant context.

The Raiders of the Lost Ark prologue proves the rule of a prologue needing to exist as its own short film, on its own two feet. It’s a mini-story with a beginning, middle and end. After watching this prologue, the only question is; how do we see more?

We’ve included this prologue because it demonstrates what a prologue is in its very purest form. It’s an example that is hard to see used in any other context than the Star Wars universe. But it has carved out its own special place in the history of prologues.

Moreover, its tone is a big part of why it’s able to get away with such heavy and blatant exposition. This isn’t just text over a black background, it’s rolling text in space set to a magnificent and epic John Williams score.

So if using a textual prologue in your screenplay is something you feel is necessary then consider at least how you can carry this in an interesting and unique way. Moreover, make this method of delivery pertain to the tone of the story at hand. This will make blatant exposition much easier to swallow.

In Conclusion: The Pros and Cons of Writing a Screenplay Prologue

2. Give the Prologue Purpose

4. Make Sure it Matches the Tone/Theme

This article was written by Tia Redgate and edited by IS Staff.

2 thoughts on “How Do You Write a Screenplay Prologue? Dodge These Key Pitfalls”