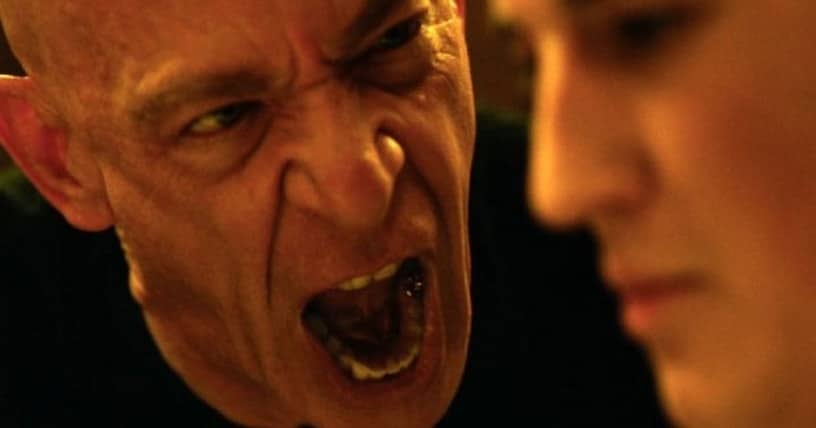 In this series, we’ll take a look at great, well-known scenes from films and TV. We’ll analyse these scenes to figure out what makes them work so well, what they add to the overall piece and why they prove so memorable. In this article we’re going to take a look at the Whiplash scene – ‘Not quite my tempo’.

A Shift in Time

Not long after the film was released ‘not quite my tempo’ was a quote familiar to many. It’s a good line but why does it feel quite so memorable? It’s a line that perfectly encapsulates characterisation, themes and narrative. But it also comes at a point in the film that signals a shift.

However, Andrew is talented at what he does. Surely he can escape Terrence’s wrath? During a rehearsal, Andrew’s moment comes. His first time at playing with the band…

This is a big moment and we’re happy for Andrew, if terrified at what might be in store for him. However, Fletcher still seems supportive of Andrew. Before they start he says warmly ‘Neiman, just do your best’. Andrew responds with an excited smile.

But then it stops. From this point on there is no turning back. Barely a minute has passed before Fletcher clenches his fist and calls the band to stop. It’s a stark and scary image, Fletcher clenching, barely holding back his emotions, which will soon break like a wave.

Fletcher says ‘Little trouble there, pick it up at 17’, indicating that Andrew messed up a little so they’ll go again. He’s still understanding at this point. It’s not a big deal, just a little mistake.

But then they start again, going for little more than 5 seconds before Fletcher stops Andrew and the band again. Fletcher is still contorted but trying to be polite as he delivers the immortal line to Andrew: ‘Not quite my tempo’. Andrew looks scared now.

Fletcher starts the band again and then stops. Then starts. Then stops, trying to figure out what Andrew is doing wrong. He’s still relatively calm and polite at this point but the tension is building, both in him and in Andrew.

“Not quite my tempo. It’s all good, no worries.”

This exchange continues on for a few more minutes. Fletcher is still calm and Andrew seems frustrated as Fletcher says he’s ‘rushing’ or ‘dragging’ each time he interrupts him. Finally, Andrew seems to nail it. Fletcher walks away, nodding. Andrew seems like he has finally got it right.

But no. And this time there is no polite feedback as Fletcher hurls a chair in Andrew’s direction, Andrew ducking out of the way.

‘Not quite my tempo’ is the final act of polite feedback that Terrence Fletcher gives Andrew Neiman before he breaks, dragging Andrew into a world of abuse and castigation. ‘Not quite my tempo’ comes to be an ironic expression of Fletcher’s criticism.

It’s a politeness that we don’t see for the rest of the film, at least towards Andrew. How Fletcher comes to torture Andrew puts this scene into a new light than on first appearance. ‘Not quite my tempo’ is not a helpful and considered piece of criticism.

It turns out to be a shark fin on the water, a terrifying signal of the monster below the surface.

The Pacing of the ‘Not Quite My Tempo’ Whiplash Scene

Part of what makes the ‘not quite my tempo’ scene so compelling is its pacing and structure. Put simply, it builds and builds.

In this ‘not quite my tempo’ Whiplash scene, what we know and what we don’t know meet in the middle to form a rubber band of tension. We’re constantly looking for clues as to what is going to happen – is Fletcher going to explode or is Andrew going to succeed and fit in?

A Rubber Band of Tension

The pacing of the scene is key to amplifying this tension. The scene ebbs and flows in terms of energy. The writing here is acutely of aware of the effect it’s having on the audience and how that effect can be manipulated to amplify the tension as much as possible.

Below is how the scene ebbs and flows and the intended effect on the audience….

A Release of Tension

What follows is two and a half minutes of abuse as Fletcher shouts at Andrew, slaps him and humiliates him.

The tension is no longer in what will or won’t happen, it’s in an immersion in what does happen. This is painful viewing. The tension has now been released. We’re right there in it and watching it unfold is horrifying but also something we can’t take our eyes off.

“Now answer my question, were you rushing or were you dragging!?”

This ‘not quite my tempo’ scene shows the very essence of how to build tension. Whilst we are watching a teacher circle a student, we could just as easily be watching a shark circle a swimmer.

An important barometer throughout the ‘not quite my tempo’ Whiplash scene sits next to Andrew the entire time. His name is Carl and he’s the drummer with which Andrew is in competition with.

We’ve already met Carl when Andrew sat next to him during a rehearsal, tasked with changing the sheet music over when necessary. Now it’s Andrew’s turn in the hot seat and Carl is feeling the pressure. Will this newbie be taking his place?

Carl serves as a crucial temperature check for the scene throughout. He’s the only other (properly) visible character in the scene. His presence, therefore, is not accidental. It’s him, Andrew and Fletcher.

Yes of course the scene is actually filled with dozens of other characters. But these are periphery characters, whose expressions we barely see and whose presence is largely unimportant to the main focus of the scene.

Carl’s expressions and demeanour change throughout the scene, in line with the ebb and flow of energy and emotion.

Carl as a Bellwether

Carl hammers home the ruthless competitiveness that is a hallmark of this music school. He’s a face to this competitiveness. We don’t know how the rest of the band react to Andrew’s abuse. But Carl provides us with what we need to know.

Crucially, during the two minutes of abuse that Fletcher hurls at Andrew, Carl isn’t present. The camera is up close to Andrew and Fletcher, almost as if no one else is even in the room. Carl’s very absence in this exchange is again, telling. His reaction is almost inconsequential, suggesting that the frequency with which this abuse happens makes it unremarkable.

There is one moment in which this section cuts away to the band (when Fletcher actually invokes them). But aside from this tiny exception, the focus is myopically on Fletcher and Andrew.

Without Carl, Andrew and Fletcher’s exchange would occur in a vacuum. Carl is an important feature of this ‘not quite my tempo’ Whiplash scene overall. He’s a character that acts as a forewarner, signalling that something is afoot before it happens. Carl can sense what is going to happen before Andrew does and before the audience does.

Of course, the essentials of what actually happens in the ‘not quite my tempo’ Whiplash scene, as well as how it is structured, are what makes it so compelling. The abuse Fletcher reigns down on Andrew is at once difficult and compelling to watch.

This moment has been coming. We’ve seen the pressurised environment of the music school. We’ve seen Andrew’s desperation to succeed and his fragility. And we’ve seen hints and glimpses of Fletcher’s monstrous technique and personality.

The ‘not quite my tempo’ scene is where all this build up comes to a head.

What’s more, Fletcher’s abuse is hard to look away from. It challenges the audience on a number of different levels…

“Are you one of those single tear people? Do I look like a double fucking rainbow to you?”

The ‘not quite my tempo’ scene feels like the showpiece Whiplash scene for a number of reasons.

‘Not quite my tempo’ is a line that has already gone down in cinematic history. It’s a line that hides a lot within it, encased in a memorable and expertly crafted scene.

There’s certainly no ‘rushing or dragging’ in the execution of this scene. This doesn’t stop us, however, from feeling like a recipient of Fletcher’s abuse, rather than just a mere witness.

2 thoughts on “Forensic Scene Analysis: The Whiplash Scene – ‘Not Quite My Tempo’”