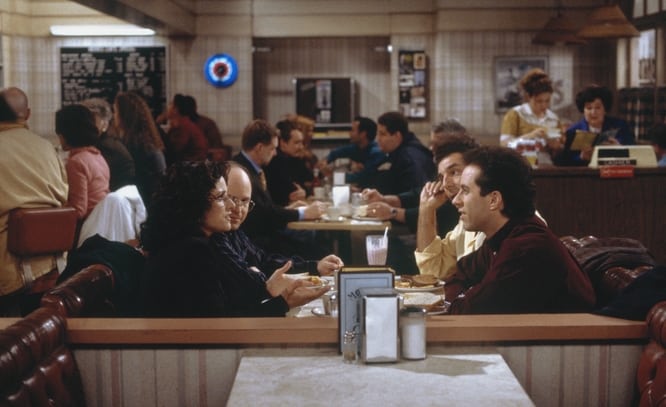 How to Write a Sitcom: The Crucial Rules of The Game

It feels more important than ever to have a good laugh. And what better way to poke fun at the state of everything, or to find comfort, than with a sitcom? In this article we will plunge the depths of television, new and old, to give you a helping hand on how to write a sitcom script.

In such a ubiquitous genre, it’s often easy to lose sight of the rules and structures that have underpinned it for decades.

Using the hilarious work and teachings of some the best loved and well-known sitcoms out there,  we will offer pointers based on…

So, what is a situational comedy? As the sitcom cliché goes, Webster’s dictionary defines ‘sitcom’ as:

So a sitcom is simply a comedy in a situation. Frequently, this incorporates an ensemble cast of characters, who rarely change and rarely develop. The Simpsons is a sitcom which best exemplifies this lack of change as even after 30 years, the central characters are still the same age, in the same house, in the same town and even in the same clothes.

The situation is the place to start when writing a sitcom. The location and the cast of characters is vital to fuelling the comedy.

So, the ‘precinct’ or primary setting. This will be the starting point for the controlling idea of the show. When it comes to precincts there are three typical types of locations in which a sitcom can be situated.

Brooklyn Nine Nine uses a literal precinct in the form of the 99th Police Precinct. This is classed as a workplace situation comedy and features police officers in their various roles.

Other examples of workplace sitcoms include the TV studio in 30 Rock, the bars in It’s Always Sunny in Philadelphia and Cheers, the basement filled with nerds in The IT Crowd, the various political buildings and offices in Veep and The Thick of it and the offices in The Office and Parks and Recreation.

The concept of the workplace could also be less literal and include schools, universities and colleges, as in Bad Education and Community. The casts are therefore work colleagues or a work ‘family’.

To create an example, a sitcom could be set in a pizzeria, which is a place of work that would allow for a central cast of pizza chefs, owners, and waiters. But it could also feature recurring characters such as customers and delivery drivers.

The home precinct is demonstrated in the aforementioned eternal sitcom The Simpsons, and in a number of other shows based around where people live.

These types of sitcoms include Friends, New Girl, Seinfeld, Modern Family, What We Do In The Shadows and Spaced.

The primary location of each of these shows is a place where people live. Therefore, the casts consist of biological families or makeshift families formed of roommates or friends.

The precinct is not always the only location and almost all shows include a number of bases for the characters to interact in, both in private and public.

It is rare that a sitcom only centres on one place. But it is vital for your own sitcom writing experience that the characters have a location where they can all meet. There, they can link up to go on a variety of antics.

However, a precinct doesn’t make it a sitcom. So far, all we have is a part of the situation. Unless you have comedic characters you’ve just written something more akin to a soap opera.

A sitcom will not succeed unless it has characters who are funny. Funny can’t be the characters primary defintion though. The comedy has to come from somewhere intrinsically tied to who that character is.

When writing comedic characters, Judd Apatow often starts by reading self-help books, which allow him to think psychologically about his characters and build them from flaws and insecurities. This is a good example of how even comedic characters need depth.

A basis of contradictory personalities and conflict is integral to every sitcom and to comedy in general. It is the first thing you should be considering when creating your characters in your sitcom.

To continue the earlier pizzeria example, it is important to create a makeshift family that all contradict each other. This may mean ensuring that one pizza chef is an Italian pizza purist, while another is an advocate of hot dog stuffed crusts, for example. 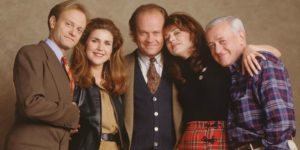 Using the cast of main characters in Frasier, it is clear to see that the creator thought psychologically about how to create innate conflict within the show’s cast.

Therefore, as demonstrated by Frasier, it is crucial to have an ensemble cast with conflict built in to their very personalities.

The humour within Frasier comes from distinctions in personalities and differences in reactions to the situations that they find themselves in within each episode.

Another important consideration to take into account when writing a sitcom is what form it will take. This will determine how the script will be written. Forms of sitcom include:

Watching and studying shows like those listed below will give you a good understanding of the potential breadth of genre within the crafting of a sitcom:

It’s important always to link the genre of your sitcom to your core values and intensions. These different comedic genres can have different functions. When misapplied or inappropriate their strength can feel undermined.

Sitcom story structure can be viewed similarly to the scriptwriting of any television show or film,  just condensed to a 22-30 minute script. When writing a sitcom the three-act structure can be applied as with every other genre of film or TV. This isn’t a strict rule but a helpful guide to follow.

The friends are all gathered in the coffee shop. During the first act, they split up into pairs, creating three separate plots with two main characters in each.

A Plot: Ross and Rachel agree to meet and do laundry. Ross is nervous when he convinces himself that it is a date and wants it to go well. Rachel wants to do her own laundry to feel independent.

C Plot: Joey wants to take his ex-girlfriend, Angela, on a date. So, he convinces Angela to go on a double date. Angela and her new boyfriend will go on a double date with Joey and Monica. However, Joey tells Monica that Bob is actually Angela’s brother, so Monica thinks she’s being set up with Bob.

All three subplots go through mild, comedic obstacles to achieve their goals, which were established in the first act.

A Plot: Ross and Rachel go to the laundrette. Ross defends Rachel’s washing machine from being taken by a ‘horrible woman’. Ross proceeds to teach her to do laundry. Rachel’s laundry doesn’t go well and everything turns pink.

B Plot: Phoebe easily breaks up with her boyfriend while Chandler is unable to break up with Janice. Chandler breaks the news to Janice and she reacts negatively.

C Plot: Joey continues to conceal the motives behind the double date. He plants the seeds for Bob to break up with Angela by highlighting Angela’s unappealing traits while he acts as a wingman for Monica. Monica and Angela go to the bathroom together and discuss Bob.

A Plot: Rachel stands up to the horrible woman proving her independence and Ross and Rachel briefly kiss. Ross then bumps his head on a washing machine door. During the End Tag, Rachel is icing Ross’ head.

B Plot: Phoebe intervenes in Chandler’s break up and Janice leaves happily. During the End Tag, Chandler runs through the streets celebrating his newfound freedom.

C Plot: Joey confesses to Monica that Bob and Angela aren’t siblings and the two agree to break the couple up. During the End Tag, Joey and Monica return from their date, overjoyed at having “ripped that couple apart”.

Everyone is basically in the same position as they were in when the episode started. They have gone through minor changes but are ultimately all still sat in the coffee shop together. The story has gone in a circle.

Other Examples and Structures

Dan Harmon, creator of Community and Rick and Morty handily adapted the 3-act structure into a story circle. The situation is allowed to change over the course of the episode but ultimately the characters are unchanged and in relatively the same position.

Harmon’s story circle is partially based on the “hero’s journey” and blueprints a successful structure for a sitcom.

Sitcoms are only 22-30 minutes long and thus the story structure is compressed and the story is almost on fast forward.

Write What You Know – But Make it Funny

One of the most common pieces of advice that people seem to tell you when writing is to write what you know. This is also true in sitcom, but as always, it doesn’t mean you can only write about yourself.

Take funny situations that happen to you and put your characters in the same situation, adapt the story of your life. If you meet someone that makes you laugh – write a similar character to them in to your medieval sitcom.

How to Actually Write A Sitcom Script

Re-Draft to Make It Funnier

Once you’ve completed your script, workshop it with people. Read it through aloud and see which bits are funny and which bits need work. Then, re-write, re-read, re-workshop your script.

This process will have developed it into something that, at the very least, you and your workshop find funny. If it makes you laugh, chances are it’ll make a few other people laugh.

Perhaps more than most genres, comedy is hard to get right without finding out if it works with an audience. This is even more relevant in a sitcom. So sharing your work with others and seeing how it plays to a room (however big or small that room may be) is a vital step in the process.

When writing a sitcom, remember to innovate and create a genre hybrid. Combining elements of different genres and forms can create interesting and exciting new ideas.

Innovation makes the sitcom and your script stand out. This guide has given you the outline of what a sitcom is, how it works and how to write one.

It’s also important to know that as with everything else, these rules can and sometimes should be broken. If you want to write a sitcom about a pizzeria then do it. If you want to stray further from the norms and set this pizzeria in a medieval kingdom, that is your prerogative.

Innovation is important and so is enjoying what you’re writing. So write what you know, and write what you like. If your enthusiasm for the idea jumps off the page, then it will be of interest to like-minded people.

Sitcoms are there to make us laugh, comfort us and re-unite us every night with characters we’ve grown to know. It’s vital that in a genre with these intentions, these elements are baked into to the writing.

12 thoughts on “How to Write a Sitcom: The Crucial Rules of The Game”