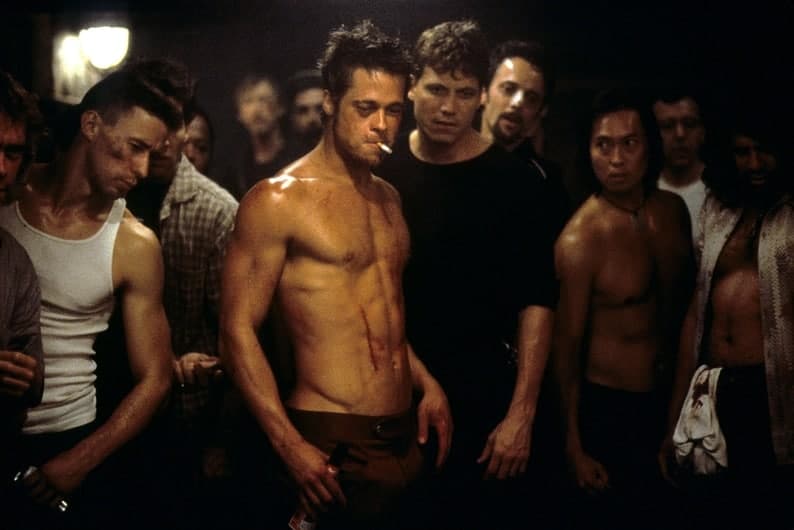 Welcome to Original Characters, an ongoing series of Industrial Scripts’ articles examining the most original characters to appear in both TV and film. This article will focus on Tyler Durden from Fight Club.

The ninth in our original characters series will look at one of cinema’s most striking antiheroes, Tyler Durden from Fight Club.

Who is Tyler Durden?

Together with The Narrator, the protagonist of the film, they organize an underground fighting club for men. Tyler later turns this into a terrorist organization under the name ‘Project Mayhem’.

In an unexpected plot twist at the end of the film, it is revealed that The Narrator and Tyler Durden are one and the same, the latter being a subconscious projection of the former’s imagination.

Tyler Durden has an important role as the antihero of Fight Club. He is also an important element in the development of the film’s narrative and other characters, such as Marla Singer or Bob, a testicular cancer survivor.

Furthermore, through him, director David Fincher and screenwriter Jim Uhls form a critique and satire of the consumerist, capitalist mindset dominant in American culture. Tyler seems to be the anti-mainstream in this way, a rejection of all that is marketed, packaged and sold to the population.

“We are consumers. We’re the by-products of a lifestyle obsession.”

However, as the film progresses, we realize that Tyler is not a revered savior but rather a physical representation of ‘toxic masculinity’, with a hero complex that proves to be more dangerous than helpful. His actions prove damaging and his very existence is undermined.

As far as original characters go, Tyler Durden is by far one of the most controversial. He’s remembered as a symbol for social rebellion, though his actions are downright terroristic. It’s hard to resist his good looks (well Brad Pitt’s), impeccable dress sense and cool detached manner.

But at the same time, he unleashes something toxic in society and in the end, feels problematic to admire. He’s a shallow character, one who initially seems to be living up to some kind of ideal but who ultimately is little more than a posture.

Tyler’s originality is based in the complexity of his existence, or rather non-existence. For the duration of the film, the audience is led to believe he is a real man, a ‘living legend’. Tyler is admired because:

Tyler possesses an almost Robin-Hood like personality, a savior of the everyman and an enemy to the rich. However, what allows him, or rather The Narrator through him, to lead this lifestyle is the fact that he is not real.

As the plot progresses, his actions spiral out of control, with little care for the consequences. He brings destruction and chaos not only to The Narrator’s life but also to society and to innocent people, making him into the true anti-hero he is.

“Hey, you created me. I didn’t create some loser alter-ego to make myself feel better. Take some responsibility!”

Tyler Durden is a living contradiction. He is simple on the surface but a complex character within. What makes him hard to analyze is the literal multi-dimensionality of his persona. Tyler Durden is:

In this way, Tyler is always in-between the real and the unreal, subconscious and conscious. Thus Tyler not only confuses other characters but also the viewer, as we try to understand his presence in the narrative. Some ways in which his existence proves to be complicated are:

Another example is Tyler’s/The Narrator’s relationship with Marla:

Narrator: “I know it seems like I have more than one side sometimes…”

Marla Singer: “More than one side? You’re Dr. Jekyll and Mr. Jackass!”

Overall, Tyler’s complexity as a character comes from him being an apparently real person whilst simultaneously only existing metaphysically. Tyler is a mere representation of the protagonist‘s psyche.

This makes him a much more interesting character than if he was real. He’s a created entity and we, therefore, have to unpick his entire existence to see what it means as a portrayal of the protagonist.

Tyler Durden’s character development is crucial for the story, as it has a number of purposes. Not only does he move the story forward and shape the other characters’ arcs, but he also influences the viewer’s perception of the world.

Tyler functions on a number of levels:

There is a complexity embedded into Tyler’s character, in his very existence but also in what he means and represents for the other characters around him. These are just some ways in which an original character can help create a fascinating story.

An original character will not only intrigue the viewer during the film but leave them thinking about them long after it’s over. One way of doing so is to criticize or/and comment on an issue from our own society.

Voiced by The Narrator and embodied by Tyler Durden, Fight Club challenges the consumerist mindset of American society. In the world of the film, consumerism is at its height. The Narrator is no exception to this culture:

The Narrator represents an average person in modern society. When Tyler supposedly enters his life, The Narrator makes some drastic changes such as:

The Narrator imagines Tyler Durden based on what he deems ideal. But he is a by-product of a society that he so ardently criticizes. This adds yet again more complexity to Tyler as a character.

The Narrator projects a version of himself that is the opposite of who he has become as a man. However, this man is still trapped within the prism of everything he claims to hate.

What allows Tyler to act in the detached way he does is his absence of self-consciousness. This prevents him from empathizing with others and setting a limit for himself. And this leads him to make some dangerously extremist decisions. Ultimately, this creates his image as an anti-hero.

Though Tyler possesses many attributes in the eyes of his peers, it becomes clear that he is more of an anti-hero than anything else.

He controls weak men that join the fight club by promising them a better life to fulfil his anarchistic desires. Tyler is manipulative, selfish, hypocritical and most importantly a danger to society.

Behind The Narrator’s back, he slowly turns the fight club into ‘Project Mayhem’, a terrorist organization. His ultimate plan: to erase debt by destroying buildings that contain credit card records. In the process, he places many lives at risk in what is a mostly performative stunt.

What eventually leads to Tyler Durden’s demise are his unrealistic solutions to the problems of the real world. There’s a limitation to Tyler and therefore, a limitation to The Narrator’s fantasy vision of a hero.

Tyler can be seen as a somewhat immature vision of an ideal, a character that at first seems cool but ultimately seems little more than a fantasy projection. He’s a man who provokes anarchy but has little actual substance.

One of the ways that Tyler Durden still resonates as a character is in his portrayal of masculinity. He provokes a debate in his existence as an anti-hero in that he is at once admired and disliked.

Tyler exacerbates a strain of masculinity that is innately toxic, getting men together to beat each other up and release their anger. He sees violence as inevitable rather than learned and seeks to use the fight club as a way of getting men to express their capability for violence.

Whilst this might initially seem like catharsis, it bleeds out and has implications beyond just the men fighting each other. ‘Project Mayhem’ is an extension of the fight club, the group of men that Tyler bands together becoming increasingly fearless and belligerent.

The ambition and ego involved in this seems to critique masculinity. Tyler feels entitled in his ambition to cause chaos and wake society up. His criticism of society might be justified but the means he goes about to it is tied to a toxicity and recklessness.

The Narrator seems conflicted about Tyler’s behaviour, which suggests a battle with his subconscious. Tyler is the man he wishes he was, the man he both admires and fears, the man who he has been taught is a hero. In this, there lies a commentary about masculinity in modern society – Tyler the distillation of a damaging vision that men have of who they should really be.

Fundamentally, Tyler Durden is a great example of an original character. He has many layers and provokes complex reactions. Not only do we want to watch him, we want to be him. At the same time, many aspects of his personality and actions make him unlikeable. He provokes a dual reaction, which makes him interesting.

Furthermore, in his true existence as a figment of the protagonist‘s imagination, he becomes more than just a character. He’s a portrayal of the subconscious in action. Upon the reveal of his true existence, we go back through everything we have seen prior. Tyler is a character that makes us question what we have seen and what we have projected onto him, just in the way that The Narrator has to.

It’s, of course, not just Tyler’s character that lives long in the memory but Brad Pitt’s iconic portrayal. His eccentric personality, unique style and lean physique have made him into an unforgettable character, destined to adorn bedroom walls.

Long after its release in 1999, Fight Club remains a cult film with ideas that continue to be relevant and debatable. Original characters like Tyler Durden will always remain lodged in audiences’ minds, whether for better or worse. The very debate he stirs is a testament to this, a character whose existence is never simple.

This article was written by Elena Bulatovskaya and edited by IS staff.