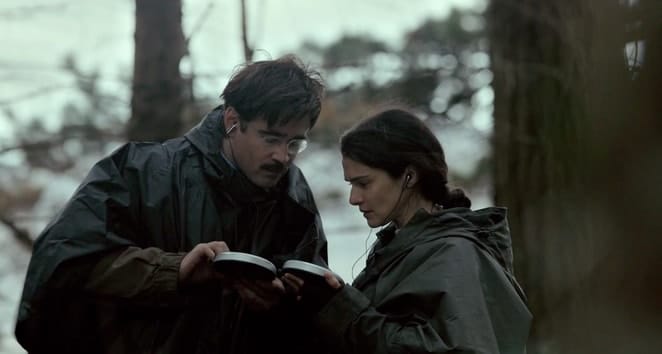 On the Nose Dialogue: How to Lose It or Use It in Screenwriting

Granted, writing on the nose dialogue might not be the greatest sin in screenwriting terms. But it’s often the quickest way for a screenplay reader to view your work as unprofessional and, frankly, amateur.

Sometimes, what was originally effective back-in-the-day but is by now well-worn dialogue, is even referred to as being ‘on the nose’.

Ultimately on the nose dialogue can be a huge turn off to potential producers, managers and agents. It can often mean they’ll stop reading your screenplay on Page 1. Let’s dive in to what actually constitutes OTN dialogue…

What is ‘On the Nose Dialogue’?

On the nose dialogue is where a character speaks with no subtext. They say exactly what they are thinking or feeling in no uncertain terms.

Robin Russin and William Downs define it as follows in their book Screenplay: Writing the Picture:

‘When a character states exactly what he wants it’s called on-the-nose dialogue. The character is speaking the subtext; there is no hidden meaning behind the words, no secret want, because everything is spelled out. But most interesting people, and certainly most interesting characters, don’t do this.’

On the nose dialogue is so unconvincing because people don’t speak like this in real life. Human beings don’t usually say exactly what they’re thinking.

Eavesdrop on conversations on the metro or at the pub. You’ll see that people tend to imply meaning, deploying subtext, rather than frankly stating their feelings.

Here’s an example of a scene in an retirement home littered with on the nose dialogue: 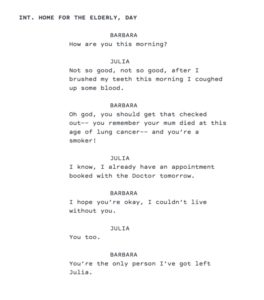 In this example, Julia and Barbara  sound like robots rather than real people.

This is primarily because there is no subtext in either Julia or Barbara’s speech. Throughout, the two characters speak in flat, depthless statements.

The rest of this article will use this scene (from a sample script) as a template to demonstrate how to avoid using on the nose dialogue.

How to avoid using on the nose dialogue?

We’re going to take a look at four main tips for avoiding on the nose dialogue.

One easy way to identify on the nose dialogue is by asking yourself…’could I get my character to perform an action that will show what is being said, rather than just having him/her saying it?’

In Barbara and Julia’s scene, we could eliminate much of Barbra’s dialogue and use other scenes to depict what is being said.

This screenplay would be much more effective, for example, if we had a preceding scene that worked like this: 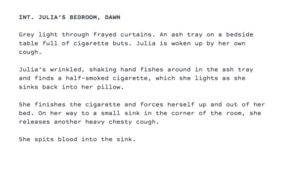 This scene would allow us to get rid of both of Julia’s comment ‘I coughed some blood this morning’, and also—Barbara’s entirely expository remark—‘you’re a smoker’.

In putting characters into situations, viewers get to see how these characters react. This is instead of merely re-telling the situation.

In real life, we learn a lot about people from the way they react to certain events and scenarios.

Events help us to read each other, and so in films they help develop and deepen characterisation.

A great example of this approach is in the opening scene (above) of Lynne Ramsey’s You Were Never Really Here.

We have one line of dialogue– ‘airport’–  in ninety seconds and yet, because he comfortably fights off a crowbar-wielding assailant, we already know the following about the protagonist:

What is more interesting than both these things is the protagonist‘s reaction to this action; he is nonchalant.

Showing rather than telling adds to the drama, gives characters more depth, and avoids on the nose dialogue.

Making characters talk about something else, and not revealing the thing that the context supposedly demands, can be a really effective way of creating poignant moments and avoiding on the nose dialogue.

A classic example would be in Quentin Tarantino’s Pulp Fiction where two hitman discuss cheeseburgers on a job.

The fact that they talk about something so frivolous at this time is actually far darker than having them talk about, say, different murder techniques.

In the Julia and Barbara screenplay imagine showing Julia cough up blood in her bedroom, and then having her sit with Barbara and not mention the blood at all. 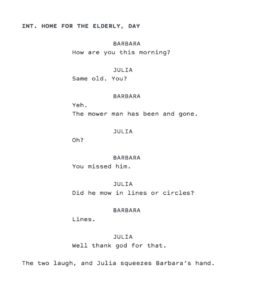 This scene is now pregnant with subtext.

Tip#3 – Exposition: a scalpel not a chainsaw

Exposition is the information an audience needs  to know about the characters, the plot, or the world they inhabit. If they don’t know this, they won’t understand the story.

In the Julia and Barbara example, all of the exposition is on the nose. The screenwriter wants to tell us that:

At times, expository dialogue is unavoidable, but here are some tips for using exposition that isn’t on the nose:

1. As discussed, show rather than tell

If it is possible to show a necessary piece of exposition through action rather than dialogue, then it is usually a good idea to do so.

Julia and Barbara’s dependance on one another is something that should be shown, in words and actions, over the whole length of the film, rather than in one direct, artificial line.

Expository dialogue is on the nose when it is awkward and contrived. It is possible, however, to reveal essential information in a much more organic way.

Here is an example of scene between Julia and Barbara where a required pieced of exposition—the death of Julia’s mother—emerges more naturally. 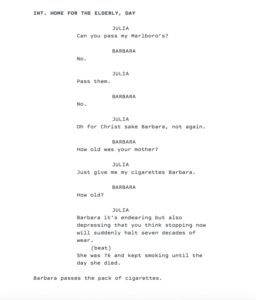 Reveal details to the viewer piecemeal, rather than in one go, to avoid on the nose dialogue.

Artificiality is easier to spot if a high volume of expository information is given in a short space of time. Rather than trying to reveal five details, as in Julia and Barbara’s scene, reveal just one or two.

If you’re writing a feature, you have the space to drop these details in over time. Sprinkle little pieces of exposition across scenes.

Hand in hand with the spread of exposition is its placement.

Exposition tends to be boring, and is often awkward, so be wary of where you put it in your screenplay.

For example, you wouldn’t want to put an expository scene right at the start, because anyone watching your movie would be much more likely to switch off straight away.

Write a scene that draws an audience in, hold their attention, and then provide exposition. Alternate between more visual, action-driven scenes, and expository scenes– or even combine the two.

Ask yourself if the information that you’re trying to convey is absolutely necessary. If it’s not, then get rid of it.

Then ask yourself if all of that remaining information is absolutely necessary.

For example, do we need to know Julia’s mother was a smoker that died of cancer? For the sake of argument, let’s say we do.

Don’t patronise your audience; allow viewers to work things out for themselves, rather than spoon-feeding them detail after detail.

One way to make exposition less forced, and be less vulnerable to end up writing on the nose dialogue, is to have a character who is new to the world/ characters/ set of rules.

Movies and TV shows do this all the time.

In Andrea Arnold’s American Honey, for example, the protagonist joins a travelling sales crew as they tour around America.

In Stanley Kubrick’s Full Metal Jacket, on the other hand, we have a whole group of newcomers.

Screenwriters often offer on the nose dialogue when they are over-eager to let us into a character’s head.

One way to offer access to a character’s thoughts without using on the nose dialogue is using ‘voice over’ narration. This is where a character speaks their thoughts out loud over the action.

Narration can be powerful. But typically it is at its most effective when serving a purpose other than to just provide exposition.

For example, imaginative and meaningful narration features in Paolo Sorrentino’s The Great Beauty.

Soliloquies are when a character speaks their thoughts out loud.

A notable example would be in House of Cards, where Frank Underwood continually breaks the fourth wall and delivers soliloquies to the audience.

Again, these soliloquies need to be well-defined in their purpose.

Finally, when on the nose dialogue works…

Occasionally, screenwriters will deliberately deploy on the nose dialogue. There are typically two main reasons why:

As discussed, on the nose dialogue often sounds absurd and robotic to the point of being comedic.

Julia and Barbara’s conversation (in the first example) is so artificial that it is perhaps best interpreted as deadpan comedy.

Yorgos Lanthimos is an example of a filmmaker who exploits the frank awkwardness of on the nose dialogue to an uncanny and comedic effect.

There are times, usually towards the end of a film, when characters speak with a frank flatness. Somewhat contradictorily, these statements are powerful because of a lack of subtext.

So on the nose dialogue can sometimes work. But it’s all about context.

Most of the time on the nose dialogue feels like an undramatic, un-cinematic and unimaginative way of getting across theme, plot or characterisation.

It will be a turn off to audiences, producers or any screenplay reader because it will seem lazy and unsuited to screen.

If you’re going to use on the nose dialogue, you better have a clear purpose. This purpose will need to be well expressed and closely tied to the tone of the script overall.

For example, if the world is surreal, the dialogue being surreal will make more sense. But if you’re trying to draw an audience into a convincing story and world, on the nose dialogue will likely only prove to be a barrier.

This article was written by Charles Macpherson and edited by IS Staff.

10 thoughts on “On the Nose Dialogue: How to Lose It or Use It in Screenwriting”