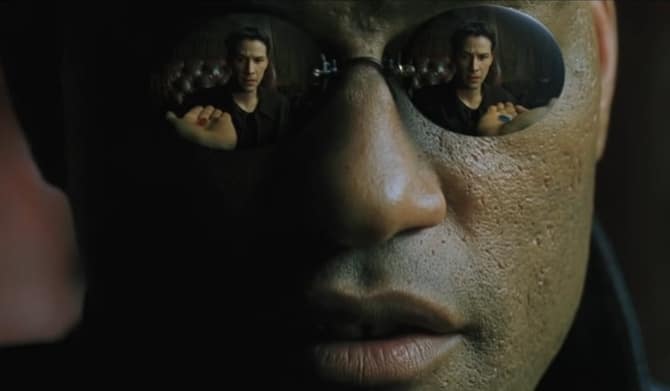 Exposition is an essential part of any screenplay. However, there is a fine line between pulling it off smoothly and making it feel too obvious to audiences.

Narrative exposition: the insertion of background information within a story or narrative.

Exposition is primarily information about the plot, a character’s backstory or the setting/context.

Weak exposition can still be successful in conveying the plot. But it will do so in a way that pulls the audience out of the story.

Great exposition can be achieved through dialogue.

However, a good screenwriting rule to follow is that of show don’t tell. Show your audience what they need to know rather than telling it to them explicitly. 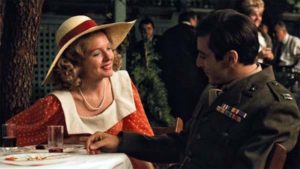 In one of the first few scenes of The Godfather, Michael Corleone outlines the nature of his father’s business. Michael sits with his wife, Kay, during his sister’s wedding party.

Kay presses Michael as to ‘how’ his father did this. Gradually Michael reveals that his father threatened the Band Leader. He told the Leader that ‘either his brains or signature would be on the contract’ (of the release form letting Johnny go).

This naturalistic explanation gives both Kay and the audience insight into the Godfather’s power. The scene is logical in that Michael has to explain how his family knows such a famous singer.

The story Michael tells is enlightening as to the movie’s context. It also sets up how the plot might unfold in Michael being at odds with his family.

An informational video provides some nifty exposition in Jurassic Park.  The audience need an explanation of the complex biology that makes the reanimation of dinosaurs possible.

The characters also need this explanation.

Both the characters and the audience can laugh at how childlike the video is. However, the video gets across key information that we need to know for the rest of the movie.

The form of the video filters the information we’re receiving, making it seem less direct.

In Up, one of the most memorable and affecting sequences in the movie comes in the form of an expositional montage.

The montage sets up why Carl is lonely and disillusioned in his old age. It highlights that he is this way because of the devastating loss of his wife. He’s also lost the dreams he had as a young man.

The montage is subtle and efficient in what it shows us. For example, a cutting together of many different ties being done up indicates the passing of time. There is no dialogue throughout and music is key in indicating a change in tone over time.

We come to know Carl and the context of his life intimately in this short montage.

In The Matrix, some direct explaining is needed to explain the concept of The Matrix. However, Morpheus quickly tells Neo – ‘No one can be told what the Matrix is. You have to see it for yourself’.

Morpheus then gives Neo a dynamic tour of the Matrix as a concept. By setting the rules of the Matrix as being too complicated to tell just through dialogue, the movie has to explain it in a visually imaginative way.

The ‘No one can be told…’ line is directly employing the ‘show don’t tell’ rule. What follows is a brilliantly stimulating exposition example.

Great Exposition #5 – Shaun of the Dead

In Shaun of the Dead, the movie provides some helpful exposition shortly after the Zombies have been introduced. This exposition fully explains the stakes of the unfolding situation.

This exposition works well because it sits so comfortably within the context. In line with their slacker personalties, it makes perfect sense that Shaun and Ed would turn to the TV in such a perilous situation.

It also makes perfect sense that the news would be explaining the situation in this way. It provides key survival information and gives the movie its blueprint.

In the BBC series, Sherlock, the titular protagonist‘s first meeting with his famous sidekick reveals a great deal.

Sherlock delivers a quick summing up of his perception of Watson. Evident in Watson’s reaction, this proves to be scarily accurate.

We are so busy being wowed by Sherlock’s talent for reading people that we don’t notice the key components of Watson’s backstory being revealed. We’re not just learning about Watson, we’re learning about Sherlock. In this duality the exposition is layered and effective. 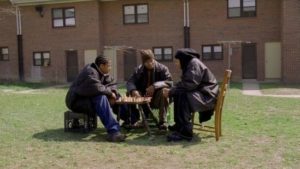 In season 1, episode 3 of HBO’s The Wire, there is a scene in which three drug dealers play chess. This scene has become iconic to fans of The Wire. It’s a brilliant piece of metaphor and exposition in writing.

These descriptions serve as a useful explanation of the hierarchy of the criminal organisation we have just started to follow.

Furthermore, D’Angelo highlights the boys as ‘pawns’ and how difficult it is for pieces to transcend their roles. In this, D’Angelo provides a tragic reflection on the boy’s lives. They are all trapped by the roles they’re expected to play.

In The Big Short,the ‘Jenga Scene’ proves that exposition can be effective, entertaining and clear all at once.

It’s a very simple metaphor to use. However, the charisma with which Ryan Gosling delivers the metaphor hides its directness.

The scene makes it so the character needs to be direct and clear to those he’s speaking to. It therefore makes the audience forgive such a direct explanation.

Over halfway into Atonement, there is a 5 minute long tracking shot of James McAvoy’s character walking through the beach at Dunkirk.

Why is this such great exposition? Up till this point, we have seen this character relatively isolated in the context of the war. Suddenly, he comes across Dunkirk beach, where thousands of British soldiers wait to be rescued.

The scene shows the mass of soldiers on the beach in their desperation, unity and fear.

This depiction of the beach tells the story of Dunkirk.

Whilst there is brief dialogue explaining the facts, we don’t need dialogue to tells us of the conditions. Instead, we have total immersion in its visual depiction.

In Fight Club, there is fourth wall breaking narration throughout the movie. Most prominently, The Narrator explains the rules of the fight club. He also explains Tyler Durden’s unique character.

The Narrator (Edward Norton) is new to this world and new to Tyler (Brad Pitt). It therefore makes sense that he should explain their characteristics to the audience.

The movie has already set up that The Narrator will be our guide. It therefore doesn’t feel jarring to have such direct explanation.

Furthermore, the movie’s final twist of Tyler being a figment of The Narrator’s imagination, also justifies this direct narration.

Great Exposition #11 – There Will Be Blood 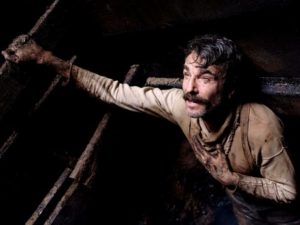 The opening sequence of There Will Be Blood tells us everything we need to know about the character of Daniel Plainview (Daniel Day Lewis).

We see the hardiness, desire and self reliance inherent in how Daniel builds his oil empire. This opening sequence serves as a capsule of American capitalism – a self made man getting rich off a discovery of oil.

All this character and thematic depth is achieved in a sequence containing no dialogue and one location. It proves again how powerful and effective visual exposition can be.

A scene early on in Chinatown uses humour to disguise some plot exposition.

The sheep provide a funny, bizarre distraction whilst the farmer yells at the government representatives – ‘You steal water from the valley!’.

This becomes a key part of the plot and disguised through a humorous, surreal set-piece the audience barely notice it being revealed. It’s a classic exposition example.

Inception contains some complex ideas and rules integral to its plot. Whilst providing some stunning visual moments, the sequence in which Dom (Leonardo DiCaprio) shows Ariadne (Ellen Page) how to build dreams, feels too direct.

Despite the impressive visuals, the scene feels static. It feels like an unintentional break in the plot and a turn to the audience to explain what’s going on.

A scene in Suicide Squad, introduces a new character in a remarkably static way. Within the scene, Rick Flag introduces Katana to the squad, where he proceeds to lay out all her capabilities and powers in 15 seconds.

‘This is Katana. She’s got my back. She can cut all you in half with one sword stroke just like mowing the lawn. I would advise not getting killed by her. Her sword traps the souls of its victims’.

This is a very functional way of introducing such a dynamic character. The dialogue is painfully transparent in its attempt to cram all the information we need to know about the character in one swift sum up.

Such straight to the point dialogue undermines any potential tension in seeing Katana develop over the course of the movie. 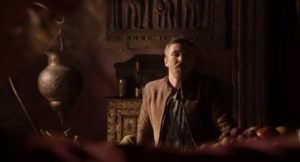 However, a kind of exposition unique to the show became somewhat infamous – sexposition. This involves a mechanical part of the plot explained during a depiction of sex.

One of the most remarked upon examples of sexposition takes place in a scene in Littlefinger‘s brothel.

Whilst sexposition is an inventive form of exposition, it feels an easy way of disguising what is simplistic plot or theme explanation.

Furthermore, it feels a cynical attempt to capture the viewer’s attention with sex, whilst remaining lazy in its storytelling technique. It’s an exposition example that most audiences can see straight through.

7 thoughts on “15 Crafty Exposition Examples: How to Do It Right”