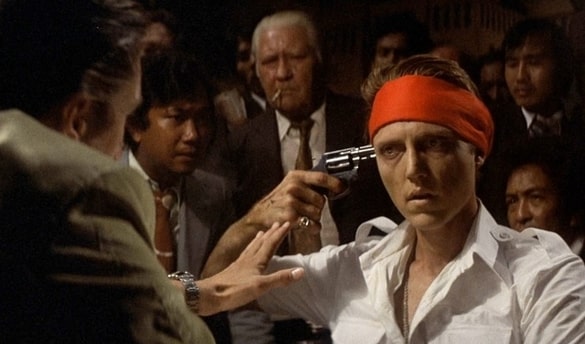 Writing a Scene: Breaking Down the 10 Key Steps in Getting Started

As with most stages of the screenwriting process, writing a scene is a journey of discovery.

Therefore, let us contemplate some inspiring questions and learning with examples fromButch Cassidy and the Sundance Kid (1969), Dirty Harry (1971), The Deer Hunter (1978), and The Empire Strikes Back (1980).

Through these examples and using ten steps, we will explore the various elements of how to write a scene.

“Every scene reveals at least one element of necessary story information to reader or audience. The information the audience receives is the nucleus, or purpose, of the scene.” – Syd Field

Essence and Purpose in The Empire Strikes Back

When Luke Skywalker is bested in a duel against Darth Vader and he discovers an uncomfortable truth.

The purpose of the scene is to reveal that Darth Vader is Luke Skywalker’s father.

Once we have established context, we can then determine content. Before doing anything else we must:

After the context has been established, with purpose, place and time, we can begin to create content.

Beware of the common pitfall when writing the ending of your scenes.

Before you write a scene, it’s essential that you have the essence and purpose of such scene in mind. 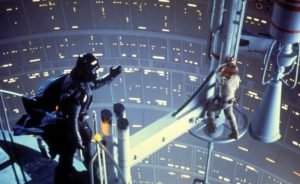 Luke has made a personal discovery, which will affect the arc of his character as a Jedi, brother, son, and man.

Having acquired new information, a mortal wound, and failed in his mission to defeat Vader, Luke must re-evaluate his journey after this setback.

From the first scene to the last, we are always trying to get from point A to point B.

Using the analogy of a boat travelling downriver, Mamet demonstrates the importance of “sticking to the channel”. If something unexpected happens on our journey, we deviate, and we come back to the channel. Never losing sight of the goal.

“These deviations are called incidents, the incidents are called scenes, and the totality of the scenes leads us from point A to point B.”  – David Mamet

If the scene does not move the character one step closer to obtaining their goal, or present them with an obstacle that they must overcome in order to achieve it, then the scene should be removed.

Every scene must contain conflict. The purpose of the conflict is to deny the character their goal and to create drama, engaging the audience.

Putting obstacles in the way of the protagonist creates conflict. They can be physical or psychological but they must be made visual.

Michael Hague reminds us that the primary goal of a storyteller is to elicit emotion.

“Emotion grows out of conflict, not desire.”

Once we have established context through purpose, place and time, we can begin to find the components within a scene to create conflict and generate drama.

Decide what the main desire is and use the content of the scene to create obstacles.

For example, in The Empire Strikes Back, things become more challenging for Luke when he is outclassed by Darth Vader in a lightsaber duel. We can see some answers to the questions from above, demonstrating the progression of conflict:

Consequently, tension is amplified due to making a difficult situation even more difficult. Drama is conflict. Seek it out when writing a scene, any scene.

By making the decision to let go of the structure and throwing himself into the abyss, Luke shows that he would rather die than join forces with Vader.

“Instead of announcing their feelings or desires, how can they hide their true desires or disguise their feelings with more interesting, sub textual dialogue?” – Michael Hauge

If you are struggling to write dialogue, one approach is to begin writing ‘on-the-nose’ dialogue. When writing a scene, having characters explicitly stating their feelings, their wants and desires, will undoubtedly make for bad writing or unintentional comedy.

However, at least you will have something to work with. It can then be stripped back, edited, and refined.

Including stakes are vital in the process of writing a scene. With the addition of high stakes and complications, there is something to play for.

It gives the characters purpose and keeps the audience invested with tension. Although every scene does not require the presence of an antagonist, each scene must have something at stake.

The stakes don’t get much higher than when being forced to play Russian roulette against your comrade and friend, as seen in The Deer Hunter.

The stakes are increased by the content of the scene: if the soldiers do not play, they will be shot by the guards or put in ‘the pit’ – a submerged bamboo tiger cage, filled with rats and the corpses of the unfortunate players.

In The Deer Hunter, Michael’s character possesses the traits of bravery, self-control, leadership, and the ability to improvise and think quickly in emergencies. His heroic actions move and inspire us during the Russian roulette sequence, as he shows:

We know these things to be true, not because someone tells us, but because we see him exhibit these qualities through his actions and dialogue.

In a well-written screenplay, every sequence, every scene, traces back to the initial moment our main character decided to go on their quest. Furthermore, each scene has been integral as far as getting them to this very moment. David Mamet tells us,

“It’s possible to structure a drama so that the supposed arbitrary incidents are related back to the first cause.”

Cause and Effect in The Deer Hunter

Before leaving home for Vietnam, Michael was an avid hunter.

Upon returning to Pennsylvania, Michael is a changed man. The trauma of war has removed any desire in him for bloodsport. As a result, he chooses to let the deer go, intentionally missing his shot.

Michael returns to Vietnam because of the words spoken by his friend, Nicky, in a much earlier scene. Before deployment, Nicky asks:

In the final act, Michael’s decision to return to Vietnam is predicated on this promise. The effects of the later scenes trace causally back to the earlier scenes in the narrative. Everything is connected.

By the same token, the words that characters use can have profound meaning with a cause and effect relationship between scenes.

In Act I, the two friends prepare for a hunting trip. Mike complains about how nobody ever listens to him when he tells them:

“…a deer has to be taken with one shot. I try to tell people that, they don’t listen.”

During Act III, at the climactic scene, Mike attempts to convince Nicky to put the gun down and come home. He fails to get Nicky to recognise him. Becoming desperate, Mike resorts to their earlier conversations.

In reminding Nicky, the two share a final moment of friendship amongst the chaos of the crowd. There is a look of recognition, laughter, and tears from Nicky as he speaks his final words.

The emotional weight of this line carries such profound meaning and significance because of the conversations in earlier scenes. Nicky listened to Mike, while no one else ever did. 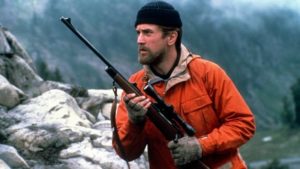 Every scene has a beginning, a middle, and an end, but you only need to show part of it.

The following structure is a useful tool when writing a scene:

For example, the classic bank robbery scene from Dirty Harry uses this structure:

Two main points to remember when ending a scene:

William Goldman’s scenes are a prime example of how to “get in late, get out early” when writing a scene. His scenes typically begin right before the ending of an action or a decision.

Doing this helps to keep the pace up, creates tension, and makes for dynamic transitions from one scene to the next.

For instance, one of Goldman’s greatest and funniest scenes in Butch Cassidy and the Sundance Kid begins with our two heroes evading capture from the authorities.

However, they run into a dead end. Butch and Sundance must choose between confronting their pursuers, facing jail, or jumping from the cliff edge into the rocky waters below.

The scene begins just before their decision to act and ends shortly after they choose to jump from the cliff, swimming to safety.

No matter how well you write your scenes, if they do not have a layout that adheres to industry standard screenplay format, your screenplay will not be read.

The first line of a scene is the ‘slugline’. This instructs whether the scene is an interior or exterior scene. Next comes the name of the location and the time of day.

Immediately after the slugline, and always before any dialogue, is a line of action.

Screenplay action is at its best when it is lean and concise. Therefore, a good rule-of-thumb is to write no more than 3 – 5 lines of action at a time, separating each action into a visual.

Anything written must be visual. There is no point in writing what is going through a character’s head or how they feel.

After action, the character with their dialogue, single-spaced beneath their name. The name and dialogue should be justified to the centre of the page with names capitalised above the dialogue.

By considering the purpose of a scene, its critical entry and exit points, and by being aware of structural elements pertaining to causal relationships of conflict and stakes, you will immediately improve your ability to write a scene.

Writing a scene needs focus and discipline. It can be easy to get caught up in the flow.

But set out a clear plan and your scenes will be more robust from the very start, saving yourself countless re-edits.

This article was written by William MacDonald and edited by IS Staff.

3 thoughts on “Writing a Scene: What Are The 10 Key Steps To Dramatic Excellence?”