A common piece of advice given to newer screenwriters is: avoid voice-over narration at all costs. This can be confusing for the fresh-faced writer. After all, many of their favourite films feature movie voice-over.

The young screenwriter starts. They pace around their room. They glare at the computer resting at the other side of the room. ‘But why?’ they scream. ‘Why one rule for them and a different rule for us?’

It will also emphasise and explain the need for care when writing voice-over. But it will then highlight great examples of voice-over narration in order to demonstrate the technique’s brilliant potential.

Voice-Over Narration—Why is it Dangerous?

Screenwriting manuals tend to compare movie voice-over to bad eggs. They assure readers that it will make their screenplays stink. They declare it must be avoided.

The screenwriting gurus have a point. Movie voice-overs certainly can reek like a bad egg.

Too often, screenwriters use voice-over as a kind of exposition. They see voice-over as an easy way to convey necessary information. This is generally the wrong way to approach the use of voice over.

Voice-overs should never be used to get out of screenwriting holes. Nor should they be used in times of desperation. Instead, they are effective when the story demands a voice-over.

A good voice-over is always about much more than the information it states. The voice-over has a meaning in and of itself.

5 Times and Ways to Use Voice-Over Narration:

1. The Storyteller and Storytelling

A movie voice-over immediately introduces a storyteller. In doing so, it harks back to mankind’s innate desire to tell, and to listen to, stories.

The concept of a narrator takes us back to the days of sitting around a campfire, where the village poet spun tales while the audience necked mead. Or something like that.

Cinema has, for the most part, put the village poet out of business. We no longer need a single storyteller relaying the story. Instead, we can visually recreate the narrative on a screen.

Having a narrator in a film, then, just in order to tell the story, is pointless. It’s always important to follow the rule of show don’t tell.

Numerous screenwriters, however, include a narrator or storyteller in their films. In order to understand why, let’s focus on Wes Anderson’s movie—The Grand Budapest Hotel.

In the opening scene of The Grand Budapest Hotel, a teenage girl visits a graveyard.

As a result, we have a triple narrative. First, the girl reading the book. Second, the Author’s tale. Third, Zero’s story.

Narration is how we tell stories to people. Anderson mimics this form of discourse in order to comment on the way we tell stories. The layers of narration give the whole film a kind of semi-mythical effect.

Anderson suggests that stories passed from one person to the next lose factual accuracy over time but accumulate a different kind of truth.

The Author’s narration in Anderson’s film isn’t there to tell the story. It is there to comment on the way in which we tell stories.

Pastiche and Parody in Voice-Over Narration

The Grand Budapest Hotel is arguably a patchwork of pastiche and parody. And yet the sum of all these copied parts is something entirely original.

The voiceover in the film is just another example of pastiche. The traditional voice of a narrator is aped.

The Coen brothers also use pastiche in The Big Lebowski. Voiceover, delivered by a cowboy-type figure, bookends the film. 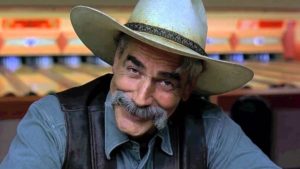 This is the opening speech: 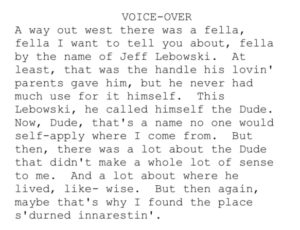 Look how great an emphasis this voice-over has on storytelling itself. Each part of the speech is plucked from a tradition of storytelling.

What’s amusing about this speech is that it seems to set to be setting up a Western movie. Instead, we’re given a comic crime drama set around Los Angeles. This is, in many ways, a movie about the movies and about narrative itself.

The use of voice-over is a form of pastiche. It mimics what has come before in order to create something different.

Patrick Bateman, the protagonist, speaks like a television advertisement.

It is entirely appropriate, therefore, that Harron uses movie voice-over.

Bateman is an empty husk of a human being—just another product in a capitalist market.

Very often, screenwriters will use voice-over if they are adapting a film from a novel (or another literary source).

American Psycho is an example of an adaptation done successfully. Screenwriters do this because they feel the words themselves do something more, or something other, than merely re-tell the story.

Obviously, words in a novel often have a significance beyond their literal meaning. They can hold a particular beauty.

While screenwriters must try to interpret this beauty and reconfigure it visually, sometimes they merely use movie voice-over to resuscitate the writer’s diction.

The whole film is littered with similar chunks of narrated text.

In general, however, a screenwriter should not try to compete with the original work of art. They should try to create something new.

If you feel like you have to use voice-over to continually quote from the adapted work, then chances are you are not creating something fresh and exciting in its own right.

Be careful and restrained in using movie voice-over when adapting a literary text. Write with your own voice, rather than using the author as a literary crutch.

To justify voice-over, screenwriters will often situate protagonists as reading or writing a personal written text. This can include:

A written text offers an insight into the character’s way of thinking.

The inclusion of a written text can also mean a voice-over seems more authentic. It provides a justification for the formal, often literary, way in which voice-over thoughts are presented.

A voice-over will make your film seem more literary. Make sure that you are aware of this. Potentially include a literary form alongside voice-over narration if you are worried about realism. 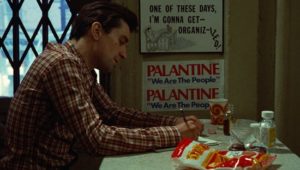 Movie voice-over is often effective when the content on screen is juxtaposed with the spoken words. This immediately offers subtext.

All is not as it seems on screen, or as is said in the voice-over. It creates an, often amusing, sense of irony. 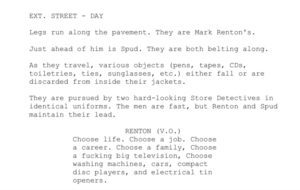 Note how the content—Mark and Spud sprinting away from ‘two hard-looking Store Detectives’ jars with the voice-over.

‘Choose life,’ Renton says, ‘choose a job, choose a family.’ The sprinting fugitives look like they’ve selected the very opposite.

Hodge has fun with the audience.

Trainspotting is a black comedy. There is undoubtedly something comic in the film’s juxtaposed opening. This technique is often used in comedy.

Peep Show uses voice-over consistently to great comic effect. In the show, we listen to the thoughts of the two main characters—Mark and Jeremy—via voice-over narration.

There is a juxtaposition between Mark’s thoughts and his behaviour.

Using voice-narration to vocalise a character’s thoughts is quite a commonly deployed strategy. It works in comedy because it can often highlight a funny juxtaposition between inner feelings and outer presentation.

It is less commonly used in drama.

In Yorgos Lanthimos’ The Lobster, juxtaposition is used differently.

The effect ensures audiences constantly question the identity of this unseen female speaker. Who is she and why does she know this man’s story?

Selecting a narrator who isn’t immediately revealed on screen is an effective way of making voice-over engaging.

As with so much of Lanthimos’ dialogue, the content of the voice-over narration itself is unusual and uncanny. The opening voice-over is the following:

Note how the filmmaker subverts the traditional expectation of a voice-over.

So Lanthimos has an unusual narrator say unusual things. The effect is still comic but in a strange, unsettling way.

The Lobster | Official Trailer HD | A24

Having somebody tell the story as if it is a memory also gives the narrative the semblance of reality. It, falsely, proclaims that this story happened to someone.

It also allows an intriguing ambiguity between the voice in the voice-over (in the present) and the character on-screen in the past despite this being the same person. How has the character changed over time?

A character looking back often gives a film an elegiac tone. Narrators are often most effective when reflecting on something that was there once but is no longer.

A great example of this is Terrence Malick’s Days of Heaven.

Linda is a detached spectator on the love triangle. It is not her who falls in love. And yet, the story is told through her memory.

The whole film is a sun-blazed, dreamy snapshot of a time and place. It is not so much about the relationship between the three lovers, as it is about Linda’s memory of these happy, and then tragic, days.

Days of Heaven is a film about memory, about looking back. The voice-over, which creates the effect of Linda reflecting and re-telling the story, contributes to this theme. 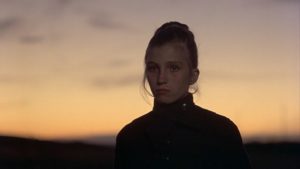 The other great thing about using voice-over as a reflection is that it offers a layer of irony.

Alan Ball’s screenplay for American Beauty takes this tension to an extreme. Watch this scene. It is our introduction to the film’s protagonist, Lester Burnham.

The voiceover declares: ‘My name is Lester Burnham. This is my neighbourhood, this is my street, this… is my life. I’m forty-two years old. In less than a year, I’ll be dead. Of course, I don’t know that yet.’

Lester Burnham narrates this plot from beyond the grave. This use of voice-over is actually effective for several reasons:

The voice-over in Alan Ball’s screenplay does so much more than relay exposition. Write voice-over narration similarly dense in subtext and no one will make you remove it from your work.

The position of voice-over narration in a screenplay is also essential to its effectiveness.

You may have noted how, in the vast majority of examples in this article, movie voice-over is used at the start or end of a movie.

It is also often effective at the end of films.

This is not, however, unequivocally true. As with all screenwriting ‘rules’, there are many exceptions.

It is essential that voice-over narration does something other than just offer expository information. It must have subtext.

But is also absolutely vital that the spoken words in voice-over narration are engaging and compelling.

The words are more important in a voice-over than in any other spoken section of the film. It must be your very best writing.

If the words are linguistically engaging, creative, and exciting then the movie voice-over has the potential to be the highlight of any film. So often, however, voice-overs are the opposite. They feel like lines of transparent expository prose.

This article was written by Charles Macpherson and edited by IS Staff.

6 thoughts on “Voice-Over Narration in Screenplays: The Ultimate Guide”