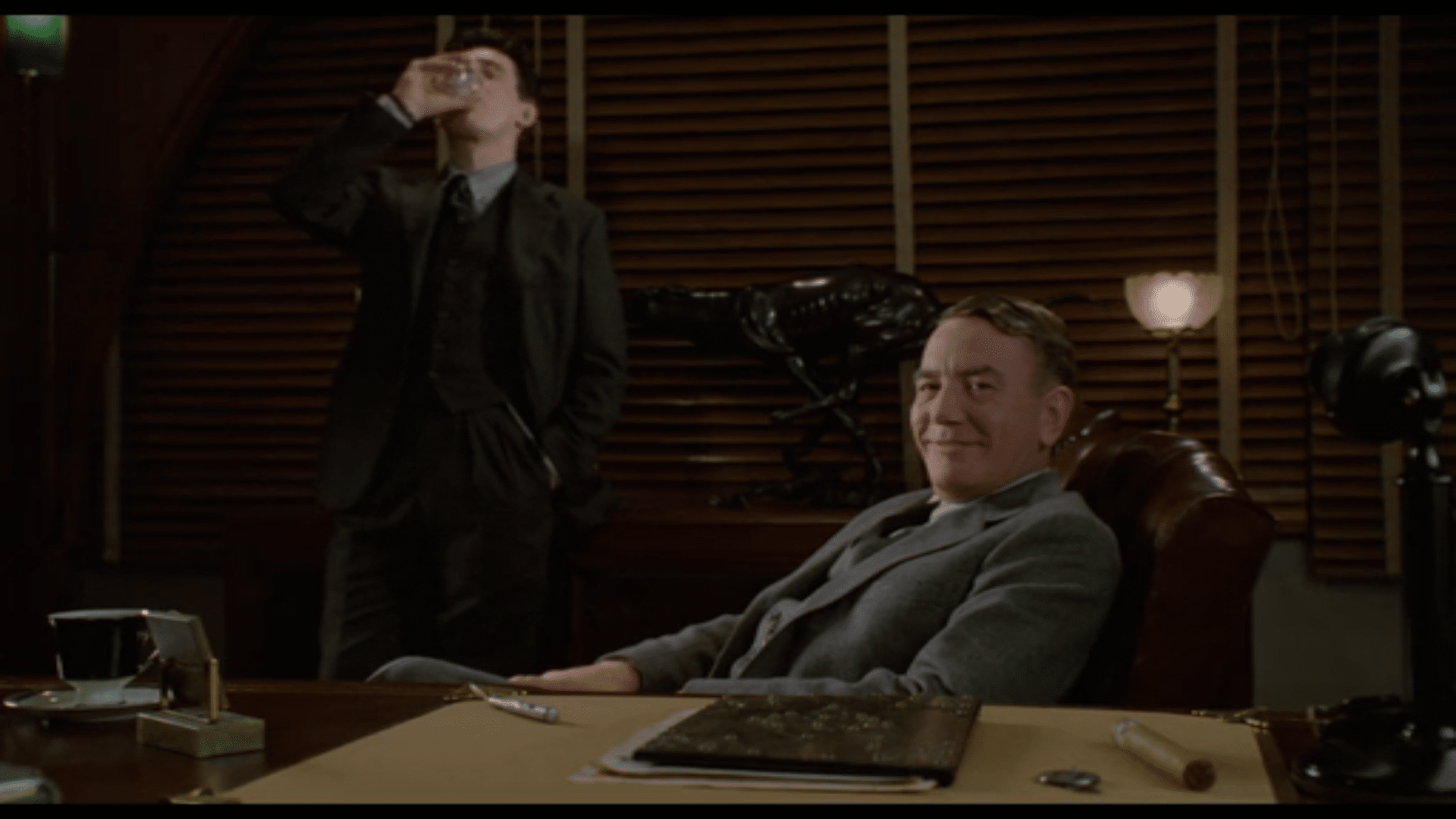 In this series we look at scenes and moments where a film or TV show has revealed a great deal of character information in a short amount of screen time. In this instalment, we focus on Tom Reagan (Gabriel Byrne) from the 1990 crime film MILLER’S CROSSING.

The Coen brothers’ third film is sometimes unfairly overlooked between the madcap hijinks of RAISING ARIZONA and the twisted Hollywood horror of BARTON FINK.

MILLER’S CROSSING is the story of one man who plays two criminal organisations against each other. It’s heavily influenced by crime films and novels of the past, especially those of Dashiell Hammett.

Hammett’s novels such as Red Harvest and The Glass Key have not only been adapted officially several times into classic films noir, but inspired many other films, including Yojimbo and in turn A Fistful of Dollars.

Who is Tom Reagan?

Prohibition, and crime and corruption run the city.

Tom Reagan (Gabriel Byrne) works for Leo O’Bannon (Albert Finney) as his advisor and close friend. They have a history together.

How is Tom Reagan’s character revealed by the action and dialogue?

Ice cubes clink in a glass in a dim office.

Johnny Caspar (Jon Polito) is in the middle of a conversation. He’s in the business of fixing fights. However, the bookie Bernie Bernbaum is selling his tips, bringing down the odds and hurting his profits. Johnny wants Leo’s help taking care of Bernie.

Leo is sat at his desk. Tom Reagan, the owner of the drink, stands behind him.

Johnny’s enforcer, “the Dane” (J. E. Freeman), stands behind him.

Leo is not convinced that it’s Bernie who’s responsible, and runs through everyone else who knows about Johnny’s fixes.

Johnny is insistent. Bernie lacks ethics. It has to be him. Finally Leo gets to the point, asking:

So you wanna kill him?

Leo looks to Tom, who says nothing. He then tells Johnny that he can’t help him kill Bernie because Bernie pays him for protection.

Johnny makes it clear how sick he is of Leo. Johnny pays Leo for protection too. He’s not exactly asking for permission. He’s going to take care of Bernie regardless.

The Dane puts a hand on Johnny’s shoulder, restraining him. As they’re leaving, Leo reminds him:

Johnny, you’re exactly as big as I let you be and no bigger and don’t forget it ever.

Tom sits down and tells Leo what he thinks. It’s a bad play.

Leo brushes off Tom’s concerns by bringing up his gambling debts. Leo offers to pay them off. Tom declines but Leo is insistent.

Tom asks Leo for a favour instead. He asks Leo to think about what protecting Bernie and offending Johnny Casper will mean.

Come on Tommy, you know I don’t like to think.

Well, think about whether you should start.

What do we learn about Tom Reagan in these scenes?

While Johnny and Leo bicker, the real power struggle is between their subordinates. For all the exposition given in the dialogue, the most important part of the scene is not the information but the emotions.

The animosity between the Dane and Tom Reagan is palpable. These are the people who will have to carry out their boss’s orders, who will likely face the worst consequences of Leo and Johnny’s rash and greedy decisions.

While the Dane participates in the meeting – Leo accuses him, forcing him to talk – Tom is content to drink and silently watch, projecting a strength and power the other characters do not.

The conflict in MILLER’S CROSSING is centred around who can and can’t be trusted. Tom, who says nothing in this meeting, is the biggest unknown quantity. In comparison, Johnny, Leo and the Dane have put all their cards on the table.

Tom doesn’t offer any advice to Leo in the moment, and yet there does seem to be a shorthand between them, presumably developed over a long history together. In the script it’s described as “an almost imperceptible shrug.”

A look from Tom is enough for Leo to reconsider his options, although it’s clear it’s ultimately his decision.

Tom’s surprise at Leo’s decision to protect Bernie is the first moment where his mask slips away and he betrays a semblance of emotion. Leo doesn’t take Tom’s silent advice, and he realises his influence over Leo is slipping.

The power dynamics of the scene shift into uncertainty when Johnny mentions that he pays Leo for protection too. Does this make Johnny subordinate to Leo? Are they equals, potential rivals, as Johnny seems to believe? Or is Johnny actually more like Leo’s employer, and within his rights to demand Leo take care of Bernie? 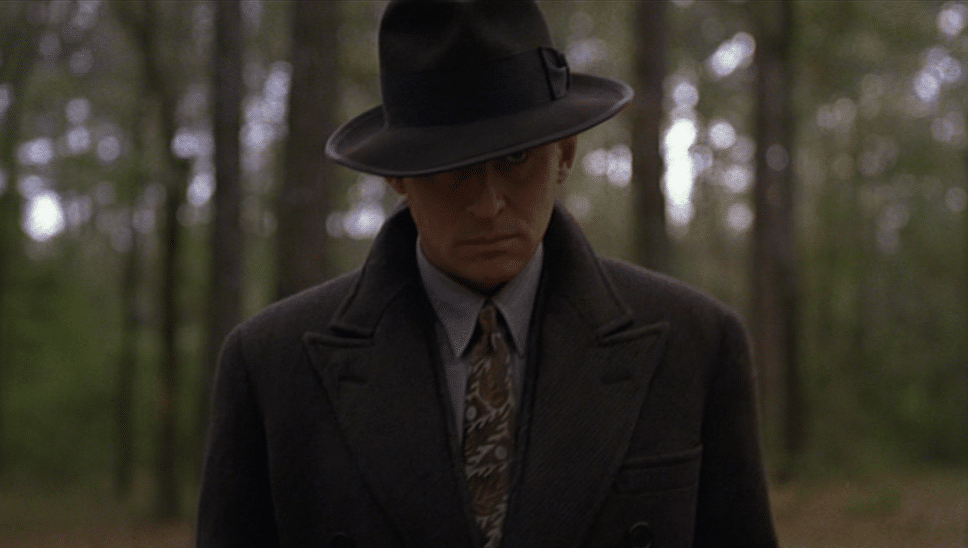 (It’s a minor element in the film, but this scene also introduces racial tensions. Leo and Tom are Irish, Johnny is Italian, and Bernie is Jewish, which might be partly behind Johnny’s suspicion.)

Of course, these questions are all academic at this stage. Only violence can and will determine the answers, which is the inevitable end result of all this posturing.

Tom Reagan knows this all too well. Hence his concern at the direction the meeting takes.

After Johnny and the Dane leave, Tom corrects his boss’ pronunciation of joie de vivre, indicating that not only is their relationship fairly close and informal but he is likely more educated and cultured than Leo.

This scene also establishes Tom’s gambling debts to Lazarre. While these don’t entirely factor into the plot later on, what’s important in this moment is Leo’s offer to clear them and how Tom turns him down.

People will say I had it coming.

While Tom may work for Leo, he refuses to take advantage of this position. His loyalty can’t be bought. Whether this is due to some kind of personal sense of morality (or “ethics”), or merely a practical measure for self-preservation, is not yet clear.

Initially, it’s not clear who the main character is. The opening scene of MILLER’S CROSSING is more than a little reminiscent of THE GODFATHER, focusing on a character negotiating a favour from a crime boss.

The scene only cuts to Tom a few times, at important moments that the script indicates. However, as soon as Johnny and the Dane leave, it’s clear that Tom is playing an entirely different chess game and on a higher level than the other characters.

The Coens are training the audience to think carefully about power dynamics. Which character is the most powerful in this scene? It’s not always the one who gives out orders to the others or the one who has the most lines.

Miller's Crossing – If you're going to laugh at me, to hell with you.

Tom keeps things close to his chest so the other characters and the audience never quite know what he’s planning, if he has a plan at all, or where his moral boundaries are.

The film goes on to gradually peel away characters’ ulterior motives. Both Leo and Tom have relationship with Verna (Marcia Gay Harden), Bernie’s sister.

For Tom, is their relationship genuine or for his own political ends? Later, when Caspar orders Tom to kill an unarmed Bernie, will he go through with it?

We just don’t know, and this is what is great but also challenging about a morally grey protagonist like Tom Reagan.

If you enjoyed this article, why not check out our article about the GENIUS CHARACTER REVEAL of  Young Adult?