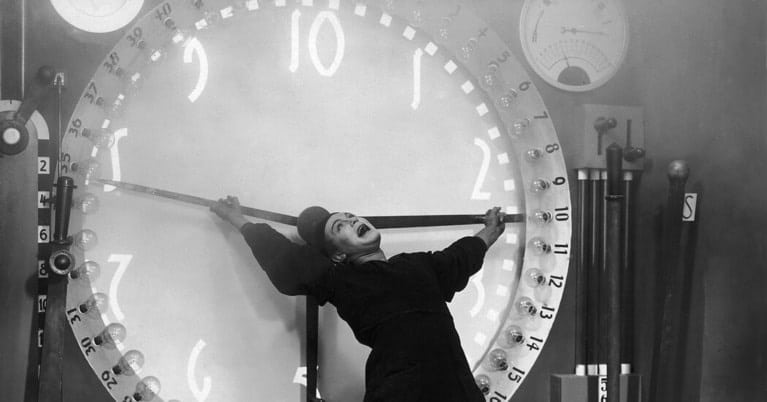 It’s rare that you would find a script without any significant passage of time whatsoever. It’s often a vital part of how a script develops and keeps its audience engaged. Thus, it is important to consider the different ways in which you can portray the changing of time.

Passage of Time Depending on Structure

Before you can understand how to show the passage of time in your screenplay, it is firstly vital to know the two key ways that time can form within the structure of your screenplay.

Once you are clear which of these structures you will use, passage of time will be easier to consider.

In a linear story like When Harry Met Sally, for example, time is shown progressing through inter-titles such as “Five Years Later”. But there are also changes conveyed in the characters’ appearances and through expositional dialogue.

However, in a non-linear story, an inter-title stating the time progression is not as simple. Other clues may be necessary to maintain clarity. For example, In Eternal Sunshine of the Spotless Mind, Clementine’s hair colour is used to indicate different timelines. This makes the passage of time more distinct to the audience.

The Different Ways to Convey the Passage of Time

Showcasing the passage of time can be as simple as changing the formatting of the scene headings.

All of these scene headings connote chronological progression in different ways.

These methods are particularly useful in linear structures or linear segments of a non-linear screenplay. They simply and clearly demonstrate that time is moving on from scene to scene.

However, this way of demonstrating the passage of time doesn’t automatically take care of the pace. You will likely still need to demonstrate the passing of time visually and physically. However, the headings are important in being instructive to the reader. They’re a base from which you can build.

Who hasn’t seen a film where the progression of hours, months or years is indicated with superimposed text or an inter-title? The easiest way to indicate the passage of time for your screenplay may just be to tell the audience how long has passed.

This can also be done by indicating the specific time, to the day, month or year.

These text inserts can be very useful for the clarity of your screenplay and its narrative progression. However, it is important to not be overly reliant on them in terms of storytelling.

They’re the most simplistic way to convey the passage of time in your story. And this may sometimes be necessary, just quickly indicating that time has passed. However, it certainly doesn’t make the most of the cinematic, visual form. And it can often be somewhat of an easy way out of a tricky situation. More creative thinking might ultimately lead to more interesting results.

Moreover, these kinds of text inserts often still should be accompanied by other indicators too. As a writer, you almost need to forget about their usage. Ignore the text insert and still try and convey the passing of time through other, more cinematic means.

The text insert should be a carrier but not have the entire responsibility of conveying the passage of time on its shoulders.

The passage of time is evident in this scene as we see the effect that decades of wear and tear have had on the hotel. Anderson juxtaposes this bleak and shabby appearance of the sixties with that of the bustling and glamorous hotel in the thirties.

This doesn’t just convey the passing of time, it says something of thematic importance too. The glamour has faded and the hotel has a different feel. This effect is all achieved via the visual descriptions of the settings.

Another way to use the setting to your advantage is to use the weather to show the changing of the seasons and to feature holidays. Catch Me if You Can, for example, uses Christmastime as a symbolic time of year for Frank Jr and Carl – who are both alone at Christmas and encounter each other each year.

In Jeff Nathanson‘s screenplay, the simplicity of the pathetic looking Christmas tree is able to place the audience in time. And the repetition of this scene and the Christmas motif is useful to show the changing of the seasons and thus the passing of years within a short space of screen time.

Barry Jenkins indicates the passage of time in Moonlight using the development of the characters, particularly Chiron, the protagonist.

This demonstrates how you can distinguish your characters in different time periods using different names for the sake of clarity within your screenplay. In Titanic, for example, James Cameron simply refers to the Rose telling the story in the present as Old Rose.

Another easy way to differentiate characters through the passage of time is to change how they look. Differences in physical appearance such as weight changes or greying hair due to age can be simple but effective ways to achieve this. How has the passage of time affected them physically?

This might be more than just a superficial physical change too. Have the years bore down on them? Or do they carry themselves with more lightness? These can be powerful and tangible ways to demonstrate the passage of time via your characters.

Another way to ease transitions between time periods is demonstrated within the script for the opening episode of True Detective.

This portion of the script establishes an interview-style talking head set in the present with Woody Harrelson’s character Martin Hart. Martin’s interview is used as voiceover to transition into flashback, as seen below:

The screenwriter combines methods here. He describes Hart’s character differently in each time period and inserts the title reading ‘1990’ to clearly signpost to the audience the first time that this time change happens.

He further eases the transition with the use of voiceover as a form of creating a storytelling style flashback. This continues throughout the entire season and eventually, the flashbacks catch up with the present.

So voiceover narration can be an effective and smooth way to ease the transition of time. As long as it is a voiceover that feels justified by the rest of the story, the voiceover can be an intimate way of carrying the audience from one time period to another.

What’s more, it’s often worthwhile to consider how the voiceover itself is affected by the passage of time.

This is a way to make the voiceover narration more complex and protect against it seeming like a transparent device used for exposition.

One of the most common ways of showing the passage of time in a screenplay is through montage.

Martin Scorsese, for example, is fond of a musical montage to show the passage of time and the growth and progression of the crime business in Goodfellas. The script conveys Henry’s youth, for instance, with a combination of voiceover and montage.

The fast pace of Scorsese’s storytelling is maintained and exemplified by sections like these. He is able to establish Henry’s work as a child for the mob, within a couple of minutes. Moreover, he’s able to convey all this important information about the story and character, whilst maintaining the fast pace intrinsic to the film’s style and genre.

Similarly, the Married Life montage in Up is an excellent example of the depiction of the passage of time as it summarizes the entire married life of Carl and Ellie within mere minutes. The advantage of animation is on display here as the film is able to age the characters and the building realistically in a very short space of time.

But the important part of why this montage is so effective is that it conveys a journey. It’s not just illustrating important character backstory that we need to know, it’s showing us Carl’s perspective of this. It takes Carl, and us, on a journey through his life with Ellie.

There are many ways to show the progression and passage of time in your screenplay. The main goal is clearly to ensure that the reader of your screenplay can clearly follow the narrative.

However, illustrating the passage of time can also be an opportunity to further develop your characters, powerfully paint the setting or even convey something of the story’s overall themes. By no means should the passage of time just be a functional transition, taking your story and characters from one place to another.

Instead, utilize the passage of time in your story. Make the most of the opportunity to demonstrate change. A screenplay is ultimately always about a journey. And in making the moving parts of that journey as meaningful as possible, you’re further heightening the power of this journey and its ability to touch an audience.

– What did you think of this article? Share It, Like It, give it a rating, and let us know your
thoughts in the comments box further down…

– Struggling with a script or book? Story analysis is what we do, all day, every day…
check out our range of script coverage services for writers & filmmakers.

2 thoughts on “How Do You Best Convey the Passage of Time in Your Screenplay?”