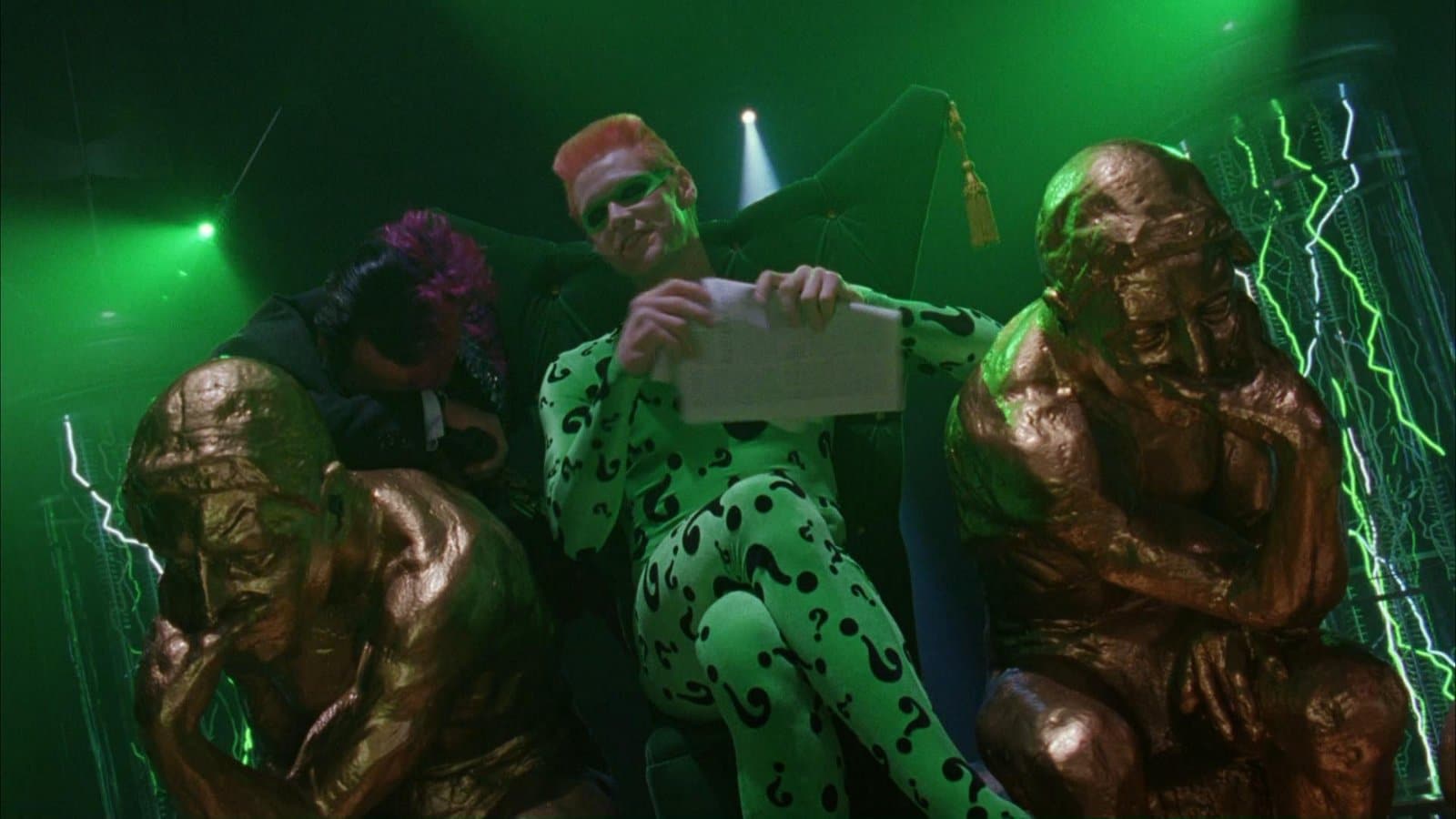 Understanding The Riddle of Tone

The release of BATMAN V SUPERMAN: DAWN OF JUSTICE is an appropriate moment to talk about tone, one of the least understood tools in the screenwriter’s toolbox. In the broadest sense, tone can be classified as comic, dramatic or tragic, but even within these “master” tones there are subdivisions. There are also multiple options for shading within – and in counterpoint to – a story’s master tone.

By looking at the many and varied live-action incarnations of Batman’s story, it is possible to draw some useful lessons regarding tonality and how to use it. At one extreme end of the tonal spectrum is the second of Nolan’s Batman films THE DARK KNIGHT, the tonality of which is so dark it flirts with nihilism throughout (Heath Ledger’s incurably psychotic Joker being one of the most truly disturbing characters not just in Batman adaptations, but in film and TV at all).

At the other end of the spectrum is the 1966-1968 TV series BATMAN, which has comic tonality at its core. At the centre – and therefore able successfully to traverse more tonal terrain than either of these two – is GOTHAM, which has dramatic core tone (although this might be a comparison between apples and oranges in terms of form, the rule still stands: occupy the tonal centre ground and you can successfully and organically venture farther from that centre in either direction).

So where does tone come from? A story’s core tone is created by the polarity between the trajectory of the protagonist (or central character, which can mean a completely flat trajectory) and the trajectory of the antagonist. In TV this means that core tone is often created solely around the single pole of the lead, because antagonists may come and go. Which means that a story’s broader tonality is determined by the supporting characters – or the ensemble in the case of multi-season TV.

Before Tim Burton rebooted Batman in 1989, the character of Batman was synonymous with Adam West’s portrayal. Boomers and older Gen Xers were brought-up on syndicated re-runs of this brightly-lit, vibrantly-coloured and acidly-witty take on the Caped Crusader. This is Batman the billionaire philanthropist without the tormented soul.

This show was created at a time before Harry Potter and The Hunger Games, when stories for 10 to 18 year-olds were almost entirely devoid of darkness (indeed the relative darkness in the original Star Wars films is partly what made them so appealing to a generation denied any real darkness in the narratives specifically made for them – which is also why an entire generation of teenagers gravitated toward video nasties in the 1980s).

But even with a clearly-defined core comic tone, the writing in the BATMAN TV series is tempered with two much subtler subsidiary tonalities. Firstly, the show’s supervillains. What we easily forget now is that although the murder of Bruce Wayne’s parents was backgrounded to the point of total elision, the baddies were subtly creepy and deliciously uncanny – counterpoint to Batman’s square-jawed non-conflicted hero. Secondly, we fail to remember (or maybe we were too young ever fully to appreciate) the sardonic brilliance of Batman’s dialogue, especially when bouncing-off Robin’s equally-witty wordplay. It’s no accident that Seth MacFarlane is a fan – casting Adam West in FAMILY GUY.

Tim Burton’s BATMAN is the first screen Batman to be directly influenced by Frank Miller’s Batman: The Dark Knight, which was originally published in 1986. But rather than lurch full bore toward blackest night, Burton realised that a generation raised on Adam West’s portrayal needed a more considered journey to the dark side. Although his Bruce Wayne is front and centre an orphan of murdered parents with a brooding, misanthropic personality, the villains are clearly influenced by the TV show, whether in terms of influence or deliberate opposition.

Find the perfect balance of characters for your screenplay and you will create the perfect tonal counterpoints for your core tonality.

Jack Nicholson’s Joker is brash and theatrical. In BATMAN RETURNS, Selina Kyle/Catwoman is by turns engagingly neurotic and uninhibitedly sexual, bringing a tonal dimension to the Batman sequence that has only recently been matched by Barbara Kean and Tabitha Galavan in GOTHAM (albeit that Uma Thurman’s Poison Ivy came close). Season 1’s Fish Mooney was one of TV’s best female villains for many years.

BATMAN FOREVER is criminally underrated, although there are two reasons for this. Firstly, the Marmite performance of Jim Carrey as Riddler. Secondly, the fact that Joel Schumacher’s follow-up was the mostly-appalling BATMAN & ROBIN, leading even genuine film fans to conflate the two into a single disaster (re-casting Batman twice didn’t help either).

For this writer at least, FOREVER – along with Mark Steven Johnson’s Director’s Cut of DAREDEVIL – is the closest the movies have ever come to capturing the quintessence of comic-book tonality: an alchemical mixture of playfulness, action, heroics, wit, angst, visual pyrotechnics and psychological acuity, but, crucially, without the blanket darkness and deadening nihilism which have been at the core of the movie franchise for the past ten years. Val Kilmer’s Bruce Wayne is tonally more fall than winter and the twin antagonist poles of Riddler and Tommy-Lee Jones’s Two-Face provide some genuinely disturbing and spontaneously funny moments.

Chris Nolan’s BATMAN BEGINS is both inherently and very deliberately as far from BATMAN & ROBIN as it’s possible to take the story and its world, but arguably the darkness is too all-consuming – smothering every other tonality with a uniform shroud of self-loathing (Christian Bale’s Bruce Wayne is so dangerously repressed one wonders what he would become if he didn’t have the outlet of being Batman – Patrick Bateman, probably).

Apart from its unappealing, confusing and archetypally-deaf super-hero vs. super-hero story core (hopefully this fad will burn-out sooner rather than later) BATMAN V SUPERMAN’s similarly unrelenting darkness (though without any storytelling nous to lessen the impact) is less like watching a movie and more like being subjected to a particularly involved and brutal therapy session from SUCKER PUNCH’s Lennox House that got stuck on repeat. It’s clear that Lex Luthor is supposed to provide some shading, but he is simply the wrong choice of character on which to place such a crucial element.

The film is an object lesson in why tonality needs to be multi-tentacle rather than single-limbed. There is just way too much darkness, especially when the convoluted story offers no catharsis whatsoever. We don’t learn anything new about either character, nor do we learn anything about ourselves.

It is on TV rather than in the cinema that Batman’s world has found its most sophisticated and intriguing retelling. GOTHAM is absolutely masterful in the way that it weaves together multiple tonalities to create a cohesive, organic whole. Bruno Heller and Danny Cannon have created a world which is excruciatingly dark, breathtakingly nasty, eye-poppingly vivid, extremely odd and, most importantly, multi-faceted and variegated in its ancillary tonality.

By centring the story on both the young Bruce (12 when the story starts) and Jim Gordon, the core tone is created between the polarities of the show’s two leads. Between the survivor guilt-laced coming-of-age trajectory of Bruce and the adherence to justice above all else of Jim Gordon (which, of course, Bruce will learn from, and eventually, we suspect, grow to be in perfect synch with) the show has darkness at its core (Bruce can never move beyond his parents’ death; Jim can only ever fail in his attempt to bring justice to Gotham).

The edges of this core darkness are then lightened, re-shaded and coloured by the rest of the ensemble. From the schizoid Edward Nygma (by turns a violent control-freak psychopath and a timid, love-sick, little-boy lost) to the brutally hysterical, mother-fixated Penguin, from the straight-talking, buttoned-down British charm of Alfred to the dangerously-obsessive psychology of both Jim Gordon and Bruce Wayne himself, from the flippancy-leavened stoicism of Harvey Bullock to the stray-cat push-pull of Selina, there is counterpoint and shading at every turn.

The show’s Mr Freeze – introduced mid-way through Season 2 – is as low key as one could possibly be with a character who sprays super-cooled liquid helium at his victims (compare the use of straight dramatic tone in Victor Fries’s story with the ridiculous cartoonish excess of the character’s appearance in BATMAN & ROBIN).

The female characters as drawn in the Nolan and Snyder films are almost entirely irrelevant – indeed it could be argued that by emancipating the female characters from their psychological-damaged roots they have been rendered redundant. For the Batman universe to have true gender equality, most of its women need to be just as disturbed as most of its men, something GOTHAM both understands and very deliberately foregrounds. When outside the supervillains there’s a quadrant as engaging as that of Jim Gordon / Leslie Thompkins / Nathaniel Barnes / Barbara Kean, the tonality available is both multi-hued and morally provocative.

For the Batman universe to have true gender equality, most of its women need to be just as disturbed as most of its men.

For all the darkness at its core, GOTHAM’s tonal brilliance lies in its very conception, because Bruce Wayne is as yet not quite fully carved – and neither is Gordon. Although there is, of course, massive dramatic irony in the set-up (we know that Bruce will, in time, become Batman and Gordon, Police Commissioner) we don’t know exactly which version of Bruce and Jim they will become. And that in itself adds yet another ancillary tonality – that of core-story mystery – to an already head-spinning palette.

It could quite plausibly be argued that BATMAN V SUPERMAN represents everything that is wrong with cinematic story-telling as the spectacle/story balance catapults inexorably toward 100/0, while GOTHAM represents everything that is right with TV, where the balance has shifted the other way, but from a starting point of about 5/95. The current 20/80-ish split as exhibited by the very best TV is probably the optimum equilibrium as yet attained in either medium. It allows for tonality that can traverse from the epic to the intimate, from dead-eyed nihilism to wide-eyed optimism, from the seriously dramatic to the facetiously comic.

It’ll be interesting to see where THE LEGO BATMAN MOVIE lands.

– Struggling with a script or book? Story analysis is what we do, all day, everyday… check out our range of services for writers & filmmakers here.