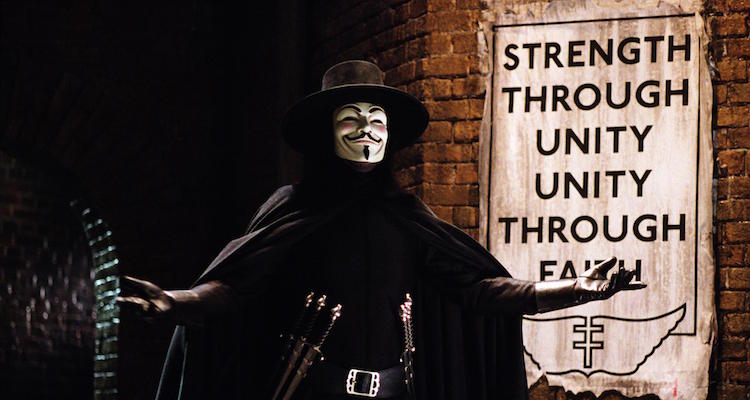 A direct contrast to last month’s Unheralded Scene from THE WOMAN IN BLACK, this month we look at a scene that focuses on establishing a twist.

Directed by James McTeigue and adapted for the screen by Lana and Lilly Wachowski, this scene or sequence shows the benefits of juxtaposition, a story within a story and how to hide the obvious in plain sight.

The legacy of V FOR VENDETTA rests far from the realm of film. Instead, it’s political themes of anti-government and iconic Guy Fawkes mask has been adopted and can be seen around the world. When pairing wider influences with the film’s own revelations you may become distracted from lessons to be learned, lessons in misdirection. Stay focused or you might miss it.

Set in an alternative future where the United Kingdom is controlled by a neo-fascist regime. The protagonist Evey Hammond, portrayed by Natalie Portman, meets the mysterious, confusing and at times confused ally called V. Portrayed by Hugo Weaving, this modern Guy Fawkes impersonator is on a mission to take down the evil government who have done him wrong.

Through coincidence or careful planning, Evey is pulled into his plans. Evey is arrested, beaten and tortured by the authorities as they attempt to gain information about V.

Our focus begins when Evey discovers a letter hidden in her prison cell, Valarie’s letter.

Perhaps the most obvious function served by this sequence is the contrast between the soft focus, warm colours of Valarie’s past and the cold, harsh reality of Evey’s confinement. Even when Evey is reading the letter the light source shines from under the door, through the Valarie’s letter and onto Evey’s face. This direct comparison of the two characters reminds the audience of everything Evey has lost. However, it also reminds the audience of something much more important: Evey’s reasons for resisting.

At first, Valarie’s story may seem far separated from Evey’s situation, but in fact, couldn’t be closer. It reminds Evey and the audience of the capabilities of her enemies. Valarie’s letter also gives Evey an ally when she needs it most, as V has either abandoned her or is unable to help.

This sequence acts as a non-condescending and stylish reminder of the events so far. Valarie’s letter also highlights a small culmination of scenes and characters in V FOR VENDETTA which were previously unimportant. This shows the scale of the story and wide reaching consequences which do not only impact the protagonist.

Dialogue can be one of the hardest aspects of scriptwriting, but as you can see from this sequence it can also be the most rewarding. The wording you use dramatically changes the tone. In this case, the emotive language aids the storytelling because it juxtaposes the harsh reality seen on screen. This is an example of how something is said is as important as what’s being said.

As Valarie’s story unfolds and her future looks ever more bleak the imagery more closely resembles Evey’s storyline. This can be seen by the camera movements, matching shots and fades between the two characters. The director has purposely matched the actresses dress and hair in order to compare their lives. This also suggests a shared fate.

Offering progression and a sense of conclusion

Not only is parallel storytelling used to suggest the passing of time, but it’s also used to imply and telegraph coming events. Will Evey meet the same fate as Valarie? The audience is completely unaware that they have already met Valarie. It’s only when her hair is shaved and her clothing is changed that her connection to the wider plot is revealed. She becomes recognisable as one of the victims.

By separating Evey’s gruesome interrogation scenes and implying the passing of time, Valarie’s story allows for emotional relief. This is very important. It ensures that V FOR VENDETTA can show the necessary ordeals that Evey suffers while at the same time not overloading the audience with torture scenes.

We can hear their voices. We can see their figures in the shadows. Why is head of Britain’s secret police, Mr. Creedy, and the prison guards hiding in shadow? Why are they hiding their identities?

This kind of mystery is nothing new in V FOR VENDETTA. V’s identity is hidden throughout the entire film. In any other film, this might seem odd but the theme of hidden identities is made normal given the situation. What is interesting is how this is used to set-up the film’s main revelation.

It’s clear that this sequence works on many levels and works to achieve several results. What’s interesting is how Valarie’s letter essentially reaffirms what the audience already knows. With the exception of adding another human face to the story, the only essential information is added during Evey’s scenes. This happens because Valarie’s story within a story is used to distract the audience from Evey’s interrogation.

Misdirection before the twist

Those with a keen eye may have noticed that the security guard is portrayed by Hugo Weaving. This along with Valarie’s letter allows for the revelation that Evey was never captured by the government and was actually in a prison cell of V’s design. V FOR VENDETTA’s twist only works because the audience is distracted by Valarie’s letter.

It’s extremely challenging setting up a twist that makes sense and the order audience won’t work out. If the twist does not make sense then the audience will challenge it. If the twist is guessed by the audience then the set-up becomes a waste of time and you will likely bore them in the process. Audiences are engaged. They’re expecting to be tricked and they’re looking for it too. So, one of the easiest ways to distract their attention and shift their gaze is simply giving them something to look at.

If you enjoyed this article, why not check out our Unheralded Scene: THE FISHER KING (1991)?

– Struggling with a script or book? Story analysis is what we do, all day, everyday… check out our range of services for writers & filmmakers here.