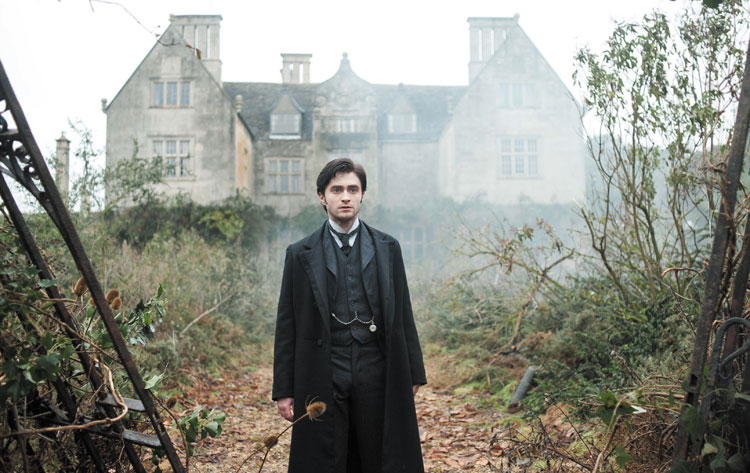 As a direct contrast to last month’s Unheralded Scene from FALLEN, this month we look at a scene that’s completely without on-screen dialogue.

The opening scene of Jane Goldman’s 2012 adaptation of THE WOMAN IN BLACK is an object lesson in creating both an opening scene and a horror scene.

Although it doesn’t feature the film’s protagonist – and barely features the film’s antagonist either – it perfectly achieves its aims. In its ninety seconds, the scene hits multiple targets and sets-up some more.

Dreams/The unconscious
The scene is conceived and shot with a dream-like style – pulling us into the unconscious, which is where horror dwells.

Childhood
Like dreams and the unconscious, childhood is liminal. And the liminal is the world of the ghost and the monster. The scene could have been written as three sets of parents enjoying a grown-up picnic on the grass while their children play inside.

Surely the shock value would have been the same? Well perhaps, but starting with children not only firmly underlines that it’s children that are at risk from the story’s monster, it also creates a tone of liminality, thereby pulling us into the story and its genre: supernatural horror.

Show Don’t Tell/Shock
The scene is almost entirely visual. The final cry from outside jolts us from the dream-like style of the scene – underscoring that real girls have died.

Set-Up
The scene sets-up the period, the milieu, genre and sub-genre, the tone and the antagonist.

Think beyond story/think beyond production
Whether intentional or not, this scene is perfect for marketing.

Suspense
Will the girls jump? (Unconsciously we know they will – after all, we’re watching a horror movie).

Intrigue
Why are these girls behaving oddly? Why have they jumped to their deaths?

“Wrongness” / “Creepiness”
Although they would be cute in a comedy or drama (or in real life), the tea party’s mismatched dolls here take on a foreboding creepiness. Even before the jump, the girls step on and crush their toys – a china teapot, a doll’s head. Again, this is just plain wrong. Children – especially girls – love their toys and would never intentionally break them. It’s absolutely clear: something very wrong and very creepy is going on here.

Establish genre-specific tone/sub-genre
Within this scene, ‘The Uncanny’ resolves into ‘The Supernatural’. Outside the story’s cultural context, for most of the scene’s duration we don’t know exactly what is causing the girls to act.  Is it some kind of psychological hysteria?  Then we see the Woman – rather than only the girls seeing her.  It’s absolutely clear now – she’s real, not simply the emanation of “over-active” or troubled imaginations.

Keep your powder dry
The Woman in Black controls the entire scene, but all we see of her is the edge of her veiled head.

Threes/Foreshadowing
Three is a naturally uncanny number.  There are no naturally-occurring threes in human physiology.  It’s an odd number (pun intended).  Much odder than five, which is deeply embedded in our psyche as a sign of order (we count to five on our fingers etc.)

It’s no coincidence that both religion and mysticism are full of “threes.”  The core “three” of human experience is mother, father, child – and there’s something deeply uncanny, mysterious and unfathomable about birth, even when one understands the biology.

Furthermore, the family of three in this telling of the story is already shattered (Kipps’s wife died in childbirth), is then broken again (Kipps deserts his son because he cannot deal with his grief), ultimately being reunited in death (all three together again as spirits).

“Prior evil”
The phrase coined by FRIDAY THE 13TH screenwriter Victor Miller which perfectly sums-up one of the core tropes of horror: the distinct flavour of dramatic irony that is unique to the genre. This scene shows us that “prior evil” without explaining it.

We now know what the as-yet unseen protagonist is up against: an antagonist with the power to make children kill themselves. Their parents can’t protect them. She’s most likely done this before and she’ll definitely do this again.

In blunt plot terms, the death of the story’s key child (Kipps’s son) is foreshadowed in this scene (again, the diffuse dramatic irony tells us that a child protagonist – or more likely the protagonist’s child – will die).

Irrespective of genre, how does the opening scene of your current screenplay measure-up? How many check-boxes does it tick? Remember that you need to grab the reader from the very first page…