In our “Unheralded Scene” series, our consultants nominate a classic film or TV scene, which in their view hasn’t received the admiration it deserves.

It might be a scene from a classic movie, which has been crowded out by other, more “showy” scenes and set-pieces. It might be a deleted scene which is outstanding in its own right but wasn’t quite in-sync or critical to the final cut of the film.

The film: THE FISHER KING – Terry Gilliam’s 1991 magic-realism flick which shares some DNA with MONTY PYTHON AND THE HOLY GRAIL. 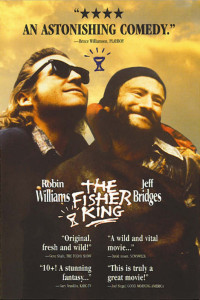 The plot: Shock-jock radio DJ JACK LUCAS (Jeff Bridges) is set for the big time with a TV sitcom of his very own – but tragedy strikes when an impressionable listener takes Jack’s advice too literally and shoots up a trendy restaurant to fight back against the yuppie tide, killing many victims.

Several years later, alcoholic Jack works in a video store and lives off his long-suffering girlfriend. A suicide attempt is interrupted by street punks who mistake him for a down and out, but Jack is rescued by PARRY (Robin Williams) a deluded homeless man who believes he is knight on a quest to find the Holy Grail – and who often has disturbing visions of the ominous RED KNIGHT. After discovering that Parry lost his wife in the restaurant shooting, the event which triggered his decline, Jack feels responsible sets about helping Parry to alleviate his guilty conscience and turn his own life around. Part of Jack’s quest comes in helping Parry woo the oddball object of his (stalking) affections, shy LYDIA (Amanda Plummer). After getting them on a first date, Parry walks Lydia home…

The scene: As Parry walks Lydia to her doorstep, the magical bubble breaks as Lydia’s neurotic mindset imagines a one-night stand gone wrong, talking herself into a doomed future, ending the date as she rushes off. But Parry gives chase and opens his heart with honesty – that he doesn’t want just one night – and admits to his previous ‘stalking’ – but in the sweetest possible way. His openness spins her around – they have their cherished first kiss – before saying good night. At his highest moment though, Parry has flashbacks to his wife’s murder – sees visions of the Red Knight – and relapses into a catatonic state.

Why it’s unheralded: In a film famed for its great buddy relationship between Bridges and Williams – the Fisher King story, nudity in Central Park, the Williams-Plummer dynamic doesn’t receive the same acclaim.

Why it’s great: It splits open one of the most clichéd scenes in the film lexicon – the doorstep kiss. Lydia provides a fantastic post-modern dissection of the moment – not as the romantic highpoint films would have us believe, but for what they usually are – preludes to failed relationships. Parry though rescues the moment with a highly unlikely and risky strategy – confessing to stalking her on a daily basis – a great example of an unexpected reaction to an unexpected strategy, proof positive that screenwriters who take risks are rewarded. The scene culminates in a great reversal – from jubilant romantic to catatonic patient.

If you enjoyed this article, why not check out our Unheralded Scene: DECONSTRUCTING HARRY (1997)?