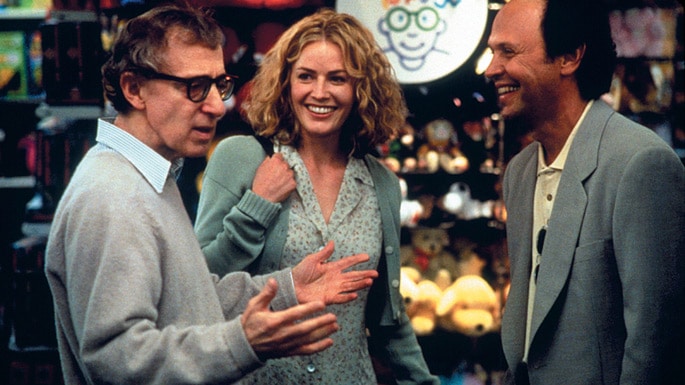 The film: DECONSTRUCTING HARRY (1997) – Woody Allen’s highly revealing comedy about a writer who uses his real life for inspiration. 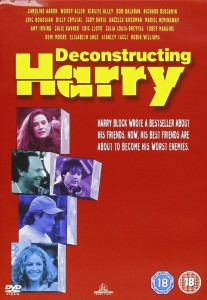 The plot: HARRY BLOCK (Woody Allen) is a boozing, womanising author who steals characters outright from his real life – leaving a trail of angry exes and friends along the way. When Harry’s old university decide to honour him, he realises he has no-one to go with – his girlfriend FAY (Elisabeth Shue) just ran off with his best friend LARRY (Billy Crystal) and his ex-wife won’t even let him take their son because Harry is such a bad influence. After sleeping with a hooker, Harry decides to take her – and kidnap his son for the journey. After meetings with many of those he’s pissed off over the years.

The scene: Harry meets the Devil. During the trip Harry gets inspiration for his next novel – about a man who travels to hell to get back his true love from the Devil. Of course, the man is Harry, the true love is Fay, and the Devil is Larry – still using real life for inspiration. The scene is an imagined section from the potential novel – set in hell as Harry dares to confront a suave Devil, who laughs off weak Harry. How dare he come here, who does he think he is?! But Harry argues he’s more powerful than the Devil – after all, Harry is no fallen angel – before the two get into a pissing contest over how bad they’ve been in life and how they’ve treated women. Eventually Harry begins to realise he’s at home down in hell, as the pair bond and break open the whisky. You can watch the scene here.

Why it’s unheralded: One of the ‘lesser’ Woody Allen films in his largely forgotten 90s era before the ‘comeback’.

Why it’s great: A great reversal scene which gets under the skin of the protagonist’s problems. When he’s on a mission to win back his supposed ‘true love’ he instead gets into a conversation about how bad he’s been to women and brings up a string of past conquests. The scene acts as a brilliant microcosm of the character’s life story, and so late in the film shows that Harry isn’t likely to change anytime soon. Like the best comedy, it takes a character with a clear dramatic goal in order to subvert those efforts with setbacks (in this case, Harry himself) and doesn’t simply riff or engage in unmotivated dialogue exchanges for the sake of humour. Of course it’s not highly dramatic, but it gives a clear situation – and the situation drives the humour. Then there’s the Devil’s payoff line. He prefers it down here in hell where he’s his own boss. He once had a job up top but didn’t like it – “For two years I ran a Hollywood studio. But you can’t trust those people”

If you enjoyed this article, why not check out our Unheralded Scene: TOGETHERNESS (2015)?