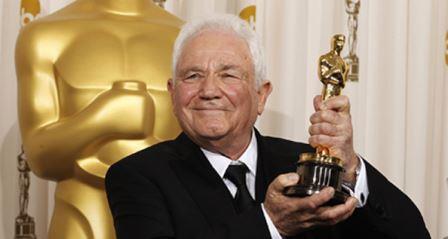 Despite the image of the wunderkind screenwriter a-la Orson Welles or Diablo Cody, many screenwriters broke in late to the game, with a wealth of wisdom and life experience to fuel their writing. As an encouragement to those who remember a time before the internet, or to those who are wondering when their efforts will pay off, Industrial Scripts looks at famed screenwriters who broke-in after their 40th birthday celebrations.

Despite a brief foray into television writing in the 1960’s, David Seidler’s time in Hollywood didn’t arrive until the Elizabeth Taylor starring biopic of famed gossip columnist Louella Parsons MALICE IN WONDERLAND – followed up by penning a Francis Ford Coppola flick. Late adulation arrived when Seidler became the oldest Oscar winner for Best Original Screenplay at age 74 for THE KING’S SPEECH.

Another of the screenwriters who broke in late; after losing his job as an oil executive in the Great Depression, Chandler turned to novel writing and penned the Philip Marlowe detective series – before providing the classy subtext and hard-boiled noir for DOUBLE INDEMNITY and THE BIG SLEEP.

Famed for his novels – many of which have been adapted for the big screen by other writers – such as THE ROAD, ALL THE PRETTY HORSES and NO COUNTRY FOR OLD MEN – McCarthy had an early stab at TV, before selling his first spec screenplay well into his time as a supposed pensioner, with upcoming Ridley Scott helmed THE COUNSELOR.

First time writer-director Courtney Hunt was Oscar nominated for her debut, a fore-runner to the grit and sparseness of WINTER’S BONE. A clear example of the many screenwriters who broke in late.

Former boxer, basketball and soccer player Arriaga put his varied life experience into Mexican break-out AMORES PERROS, making a name for himself with fractured timeline, multiple-protagonist thrillers such as 21 GRAMS and BABEL.

A twenty year acting career, including stints on MONARCH OF THE GLEN and OUR FRIENDS IN THE NORTH gave Fellowes first-hand exposure to great British drama – experience he’d put to effective use when writing GOSFORD PARK and DOWNTON ABBEY.

Another one of the screenwriters who broke in late, after a 17 year career as an entertainment lawyer, Ron Bass combined his writing passion with his industry knowledge to become one of Hollywood’s most prolific and lucrative writers, with MY BEST FRIEND’S WEDDING, SLEEPING WITH THE ENEMY, STEPMOM and ENTRAPMENT among his credits.

Irish ex-pats Jim Sheridan and Terry George followed similar career paths, both emigrating to New York in the 1980s before turning their experiences of the Irish Troubles into stage plays and eventually films, collaborating on IN THE NAME OF THE FATHER, SOME MOTHER’S SON and THE BOXER.

Working as a film editor whilst developing his own screenplays, Peoples’ big break came when he was hired by Ridley Scott (along with his hiring of Cormac McCarthy, clearly an advocate of the mature writer) on BLADE RUNNER, before acclaim for UNFORGIVEN and TWELVE MONKEYS.

Journalist Ephron was married to Watergate exposer Carl Bernstein, giving her the opportunity to write an unused draft of ALL THE PRESIDENTS MEN which garnered industry attention and her first screenwriting offers, before her biopic of labour-union activist Karen Silkwood earned her an Oscar nom.

You’ve Gotta Use What You’ve Got

Nora Ephron’s background as a journalist fed directly into her early work, whilst Jim Sheridan & Terry George’s time in the Irish Troubles propelled strong dramatic films – life experience invests scripts with genuine insight and a great personal hook of authenticity when pitching and taking meetings. David Webb Peoples and Ron Bass worked elsewhere in the film industry whilst honing their writing – but then came armed with an insider’s perspective. Patience and preparation pay…

– Struggling with a scripts or book? Story analysis is what we do, all day, every day… check out our range of services for writers & filmmakers here.

7 thoughts on “10 Screenwriters Who Broke In Late”