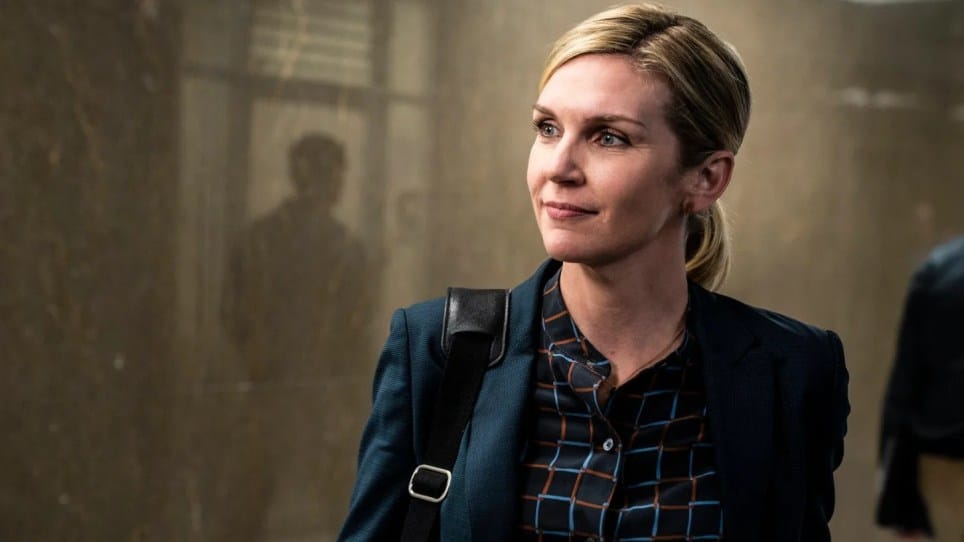 Welcome to Original Characters, an ongoing series of Industrial Scripts’ articles examining the most original characters to appear in both TV and film. This article will focus on Kim Wexler from Better Call Saul.

“Not the same as anything or anyone else and therefore special and interesting.”

– from The Cambridge English Dictionary

Great characters are at the very heart of great screenwriting and original characters can help to elevate great to superlative.

They may be plucked from real life or an amalgamation of real people. Or they might just simply be a genius stroke of creativity. Either way, these are original characters…

The nineteenth of our original characters series will look at Kim Wexler from Better Call Saul.

Who is Kim Wexler?

Kim Wexler is the Bonnie to Jimmy McGill’s Clyde. Throughout Better Call Saul’s six seasons, she’s Jimmy’s most consistent ally. And boy does he need one for all the enemies he makes. In this regard, it’s Kim and Jimmy versus the world.

This partnership evolves through the six seasons, from colleagues to friends to lovers to partners in crime to fugitives.

It’s easy to watch Breaking Bad and view Saul Goodman as a cartoonish character, with little sense of who he is as a human being. This is Better Call Saul’s purpose; to shine a light on what lies beneath Saul’s shiny surface.

Kim though is far more than just Jimmy’s partner in crime. She’s a brilliantly fleshed out, complicated and often inscrutable character. She’s arguably what makes Better Call Saul such a nuanced and accomplished series and completely different in tone from its parent series.

In many ways, Kim Wexler sums up the show’s premise (and that of Breaking Bad). She represents – just as Jimmy and Walter White do – the idea of someone wrestling with two sides of themselves. Ultimately, Kim battles with her desire to break bad.

Her moral core is a strong one and this, therefore, makes her battle even more profound. More than the other characters mentioned, we really feel that she is someone with a robust sense of doing the right thing. Her motivation to help clients in need, pro bono, for example, demonstrates this perhaps more than anything else.

But in a sense, this desire to do good often manifests in order to counteract her bad deeds. And this rears its head the more involved in Jimmy’s schemes she becomes.

Kim is an original character in the way she constantly challenges the audience to understand her. At the beginning of the series, we think we have a reasonably clear idea of who she is and how she relates to Jimmy and consequently, the series.

But Kim surprises us perhaps more than any other character. We know, after all, that Jimmy is heading to becoming Saul. Kim’s destiny though is a mystery and so perhaps keeps us hooked even more than the central character arc.

Obviously, Kim’s relationship with Jimmy is the beating heart of her character arc. He’s the one who drives her to increasingly break bad, for instance, and the one that consistently challenges her.

But due to the strength of her characterisation, she is by no means just there to support Jimmy’s arc. Instead, the symbiosis between the two characters creates a powerful harmony. They become a unit, each vital to the other’s existence.

However, her more relaxed side provides a gateway to her true self, not just in that she is able to be herself around Jimmy, but in that he indulges the side of her that likes to push boundaries, play with fire and challenge authority. This, in turn, gives us insight into her deeper, underpinning motivations; her childhood, for example, and the path that led her to become a lawyer in the first place.

Jimmy is both the best and worst thing for her. She even says it herself:

Jimmy! You asked if you were bad for me. That’s not it, we are bad for each other.

Jimmy and Kim serve up a great example of how to write a convincing on-screen relationship. There’s never a moment we doubt their affection for each other. They’re significantly lighter in each other’s presence, whether this means taking the weight off Kim’s professionalism or allowing Jimmy to stop being so performative.

And this relationship is so convincing because the deeper sense of who they are is intrinsically connected to how they relate to each other. We see, for example, how no one truly can take Jimmy for who he is, apart from Kim. Meanwhile, we see that Kim has trained herself so acutely to behave in a certain way, except for when she’s with Jimmy, who doesn’t have any firm notions of how lawyers should behave.

Kim and Jimmy allow one another to exist as they truly want to be but are never truly allowed to be, primarily because of their chosen profession. However, this allowance to truly be oneself also ends up being their downfall. In indulging in the joy they get from one another, they eventually, somewhat tragically, consign themselves to a restricted fate.

So they’re yoked to each other in this regard. It’s ultimately a beautiful love story, despite how, in a sense, bad for each other they are. Jimmy may dampen Kim’s professionalism and Kim may encourage Jimmy’s devilishness. But in the end, they can’t not be together.

Howard Hamlin is another important character to Kim in that he challenges her battle between studious professionalism and rebelliousness. Howard is, after all, the ultimate model lawyer, so faultless that it’s…well, kind of a fault.

And it’s clear that at the series’ beginning, Kim strives to be on Howard’s good side. There is, however, something that always rubs Howard the wrong way about Kim. And eventually, Kim refuses to let this beat her.

Kim’s relationship with Howard strikes at a disdain for authority that she has, and that Jimmy allows her to indulge. Moreover, Howard, with his innate privilege, frustrates Kim. Kim, after all, came from the opposite background to him; growing up poor and working her way up to lawyer from the mailroom.

This perceived sense of entitlement ultimately leads Howard to become something of an antagonist for Kim. He represents everything wrong with the law world; entitlement, arrogance, inflexibility and elitism. Kim, in the end, strives to represent the antithesis of this, wriggling free from the privileges of working for a corporate firm and instead fighting for the proverbial little guy by doing pro bono work.

This is, in turn, when Kim seems at her happiest. And this apparently only heightens the sense that Howard is the bad guy. Howard is a useful enemy for Kim; someone Kim can rail against perhaps so she can feel good about herself and what she’s doing.

In the end, however, Howard proves to be more than the sum of his parts. And Kim’s identifying him as an enemy proves to be dangerous. Howard serves as a litmus test for Kim. He’s how she measures herself as a lawyer. But eventually, he plays a key role in how we measure Kim Wexler as a human.

Kim’s Past – How Did She Get Here?

Part of why Kim is so alluring and absorbing as a character is her somewhat mysterious past. The series never gives us full and clear explanations. Instead, like with all its elements, it drip-feeds the audience clues and hints. This way, it gradually builds a more cohesive picture, whilst still leaving a lot to the imagination.

Kim’s relationship with her mother comes to form an especially important part of how we understand and interpret her actions. Her mother used Kim in order to get away with stealing, for example.

And this seems to, in a sense, mirror her relationship with Jimmy. Running schemes with him taps into her upbringing, for better or worse. Moreover, we see how her interest in fighting for those who need it stems from her childhood. She, for example, constantly had to flee temporary residences with her mother in order to evade eviction.

Moreover, whilst we never get a full picture of it, we get the sense Kim is trying to run from something. The pursuit of her career is relentless, and she overworks to the point of dangerous exhaustion (crashing her car, for instance). Her background means she has to work twice as hard as Howard Hamlin or even Jimmy. But still, her zealous commitment to her work and neglect of self-care seems rooted in something deeper.

Whilst the details are only ever teased, it’s clear Kim came from a difficult place, a place which her pursuit of the law perhaps seeks to outrun, escape or disprove.

Kim’s backstory is ultimately a fascinating and complex one. And the series demonstrates perfectly how to not overexploit a character’s backstory but instead layer it into the drama and narrative. Kim’s story is evident not via expositional flashbacks but instead, in her actions, behaviour and general characterisation.

Kim Wexler demonstrates how to use a supporting character to bolster the series’ key theme. She’s the perfect example of an element that doesn’t just add or distract from the main storyline but accentuates its purpose.

Moreover, Kim is arguably a Trojan horse character in that she perhaps represents the series’ themes and premise even more so than Jimmy becoming Saul Goodman. Kim, after all, is the character we perhaps least expect to become involved in the dark world that Jimmy does.

She largely maintains a moral core, which is why she’s such an appealing character. However, in indulging in her foibles and flaws, she also dances with the devil. Kim’s arc, therefore, perfectly mirrors Walter White’s in Breaking Bad.

Is Better Call Saul really about Kim Wexler and not about Jimmy McGill? Well, perhaps the time given to Jimmy over Kim answers that question. But there is certainly a case to be made for her story arc being more surprising, pertinent to the series’ themes and gripping. In a series where we know the outcome (or a large part of it), Kim’s arc is vital in sowing true mystery.

So Kim Wexler’s ultimate lesson is to pay almost just as much attention to your supporting characters and their arcs as much as the primary ones. Because in the end, they may prove to be just as much, if not more, of a justification for the series premise and themes as the protagonist.