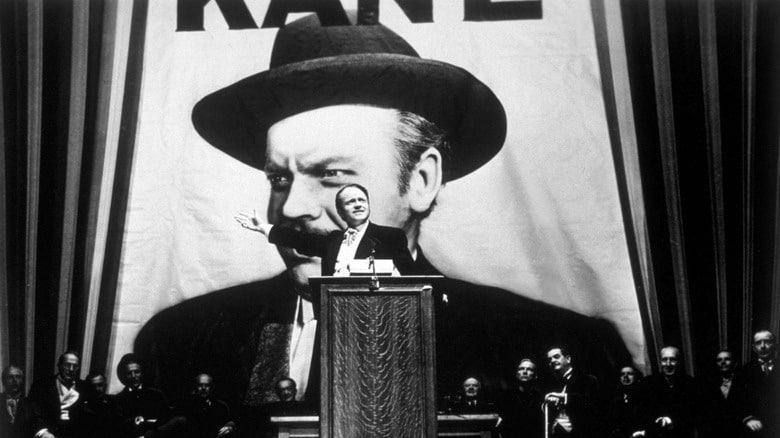 Citizen Kane; a classic piece of cinema still studied in film schools throughout the world today. Written by Herman J. Mankiewicz and Orson Welles, it was directed by Orson Welles, who also took the starring role. The 2020 Netflix movie Mank even tells the remarkable story of how the film was created back in 1941. It’s the ending though, in particular, that stands out as one of the most iconic and cited examples of great storytelling in cinema history. But why? What makes it an ending people still discuss today? Well, in this article we take a look at what is so good about the Citizen Kane ending scene and ending overall.

What is “Rosebud”? The long search is finally over, or so it seems!

A reporter embarks on a journey to discover the meaning of protagonist Charles Foster Kane’s dying word, “Rosebud”. The story is depicted through flashbacks told by the significant people throughout Kane’s life.

Each story reveals more about Kane as a person. However, it brings us no closer to the pivotal question asked. The truth is nobody in Kane’s life knows the significance of “Rosebud”.

Most exciting is the big reveal. At the very last moment, the film appears to have reached its end. But just as the credits are expected to appear, there it is! The riddle is solved and we have an answer to what “Rosebud” means.

Kane’s butler, in charge of the residence for the past eleven years, claims to have heard Kane mention “Rosebud” on two occasions. Once after Kane’s second wife Susan Alexander-Kane leaves him, and the final time on his deathbed.

This employee provides the final flashback which naturally segues into the Citizen Kane ending scene. Picking up immediately from where Susan Alexander-Kane left off with her flashback, this is notably the final piece of the jigsaw in the puzzle of Charles Foster Kane.

Welles has only ever commented on this as a ‘jump scare’; a playful way to shockingly alert any bored or distracted viewers. This scene is an important one and should have your full attention. Perhaps, Welles is trying to show us that.

However, it also potentially acts as a metaphor for his wife, a bad opera singer. Moreover, it symbolizes his pain and insult as she walks out on him. Either way, it’s an alerting start to an important and powerful scene.

The scene in which Kane destroys the bedroom in anger after Susan leaves him is one of the most famous scenes from the film. It’s a visual representation of how abandonment destroyed his world. And it ultimately leads to Kane rediscovering the snow globe. This, in turn, triggers the memory of his original abandonment by his mother.

The discovery of the snow globe is the key to the Citizen Kane ending, both figuratively and literally. It is where Kane is reminded of a simpler time. Here, he played in the snow as a young boy just before his innocence and childhood would be gone forever.

At this point in the story though, the meaning of the snow globe or the definition of “Rosebud” is still unknown to the audience.

This scene provides the only other mention of “Rosebud” by Kane. And it purposely resembles the beginning of the film; a dying Kane holding a snow globe whilst uttering the word “Rosebud”.

When Kane first meets Susan, the snow globe is visible in her apartment. As they get to know one another Kane reveals he was en route to view his mother’s possessions that have been kept in storage since her passing. So it could be argued that here the snow globe caused a subconscious connection between Susan and Kane’s mother.

The snow globe is peacefully familiar to Kane as the scene inside matches that of his childhood memory of his last day with his parents. The scene in which Mr Thatcher collects Kane shows the audience Kane’s abandonment and his resistance to give up his family.

The use of the sled as a weapon is an iconic example of visual language. It is no accident that Kane uses the sled to create a barrier between himself and Thatcher. This moment directly correlates to the Citizen Kane ending (we’ll discuss this further down).

In the Citizen Kane ending scene, a sled is tossed into a fireplace with the word “Rosebud” on it. This is the big reveal to the audience. In the final moments, it answers the question we’ve been asking for the film’s entirety – “what is Rosebud?”

An Answer From the Fire

The character in search of the answer will now never know as the only trace of evidence begins to burn away. Fortunately, the audience is able to have closure on the story as the sled is recognizable from the childhood scene in which Kane plays in the snow.

When Kane utters “Rosebud” after Susan leaves him, it reveals his inability to ignore the person he has now become as opposed to the person he might have been. Kane’s resentment towards Thatcher for taking him from his home, and his general despise of wealth, is subtly present throughout the film.

I always gagged on that silver spoon.

If I hadn’t been very rich, I might have been a really great man.

As previously mentioned, the sled once served as a barrier between Kane and Thatcher. Now Kane is feeling existentially lost, he longs for his sled as comfort. Psychologically, he desires to reinforce the barrier between the carefree boy and the cold wealthy man he once feared.

As an old man recognizing he has now become the cold wealthy man himself, Kane tears up as he reflects on the loss of his childhood purity. It is suggested the remainder of his short time left will be spent wallowing in his self-fulfilled prophecy of loneliness.

Kane’s dying word suggests his final thought was of his childhood sled. His wealth, fame and collective fortune proved to be of no comfort or happiness in the end. Ultimately, Kane longed for his humble childhood and its simplicity.

The way the final scenes are stylized brings the tone of the film to its darkest point.

The size of the residence is truly exploited to magnify the depth of Kane’s loneliness.

As Susan leaves Kane, he simply stands and watches her leave. Each escaping footstep creates only more empty space for him. Suffering in silence, he witnesses the great length she goes through in order to get away from him.

After Kane’s breakdown in which he destroys the bedroom, he leaves the room and navigates his way through the castle. It’s unclear where he is going or why he leaves.

Something that is explicitly clear is Kane’s many reflections.

This works as an accurate metaphor for both Kane’s narcissism and his eternal loneliness, that which will forever exist within his pleasure dome, his palace.

One of the final shots in the Citizen Kane ending scene shows the sled that Kane plays on as a child. Not coincidentally, it is next to a picture of a young Kane and his mother.

Amongst the vast collection of expensive statues and collectables, it is insignificant until it is removed from the heap and tossed into the furnace.

The following shot is the reveal of the sled and its significance. “Rosebud”!

Mr Kane is a man who got everything he wanted then lost it. Maybe “Rosebud” was something he couldn’t get, or something he lost. Anyway, it wouldn’t have explained anything. I don’t think any word can explain a man’s life. No, I guess “Rosebud” is just a piece in a jigsaw puzzle. A missing piece.

The metaphor of a man’s life being that of a jigsaw puzzle, with all the different pieces adding up to a full picture, is mentioned multiple times throughout the film. The film ends with the dramatic irony of the missing piece being burned away.

As the black smoke ascends to the heavens, the final trace of “Rosebud” and Kane’s pain and suffering disappears. Thus cleansing the castle of his torturous memories; memories that will only ever be known to Kane himself.

The Man and Boy

The Citizen Kane ending scene rings so powerfully because it speaks to a duality at the heart of everyone; the adult they’ve become and the child they once were. Citizen Kane does this on an epic scale. Kane himself is a grandiose man, with his achievements, successes, failures and material trappings at an extreme.

The ending, in general, shows this perfectly.

This juxtaposition – between a man of wealth and accomplishment and a longing for a lost childhood – is a tragic one. And it’s an equation many can relate to. We all hold onto the objects that were important to us as children.

More importantly, however, there are always moments in life which prove to be a fork in the road. And Kane being taken away from his family is such a moment. Uttering “Rosebud” on his deathbed proves the essentialness of this pivotal memory and moment to him.

Many can relate to wondering what could have been and wanting to go back to that sense of innocence; a time when the most important thing in the world was joyously playing on a sled, with family watching on in the background.

The Citizen Kane ending also, in a sense, critiques the American dream.

What is So Good About the Citizen Kane Ending?

To say Citizen Kane was good for its time is an understatement. It is fair to say that very few films have proved to stand the test of time as successfully.

Citizen Kane is an epic story, filled with flawed, three-dimensional characters and a clear and engaging plot. All the well-placed plants during the narrative are executed expertly and pay off perfectly in the final scenes. The character arc is complex whilst natural and fulfilling. These elements make it a brilliant and engaging story from start to finish.

Most importantly though, a bittersweet end is usually a strong tool to stir up emotion in an audience. The Citizen Kane ending does this very successfully. By revealing “Rosebud” when it does the film achieves two things: it answers the story’s main question and creates sympathy for Kane right at the last minute.

This is the perfect example of how to end a film compellingly. The audience is given the answers they’ve sought throughout the film. However, they’re also left with a sense of mystery. We’re left grasping for something, wanting to know about Kane’s depth and gaining a heartbreaking insight right at the death into the myths that made the man.

In this respect, the Citizen Kane ending pulls off the perfect balance needed for a great ending; resolving the story but leaving us desperately wanting more.

This article was written by Dom McSherry and edited by IS staff.