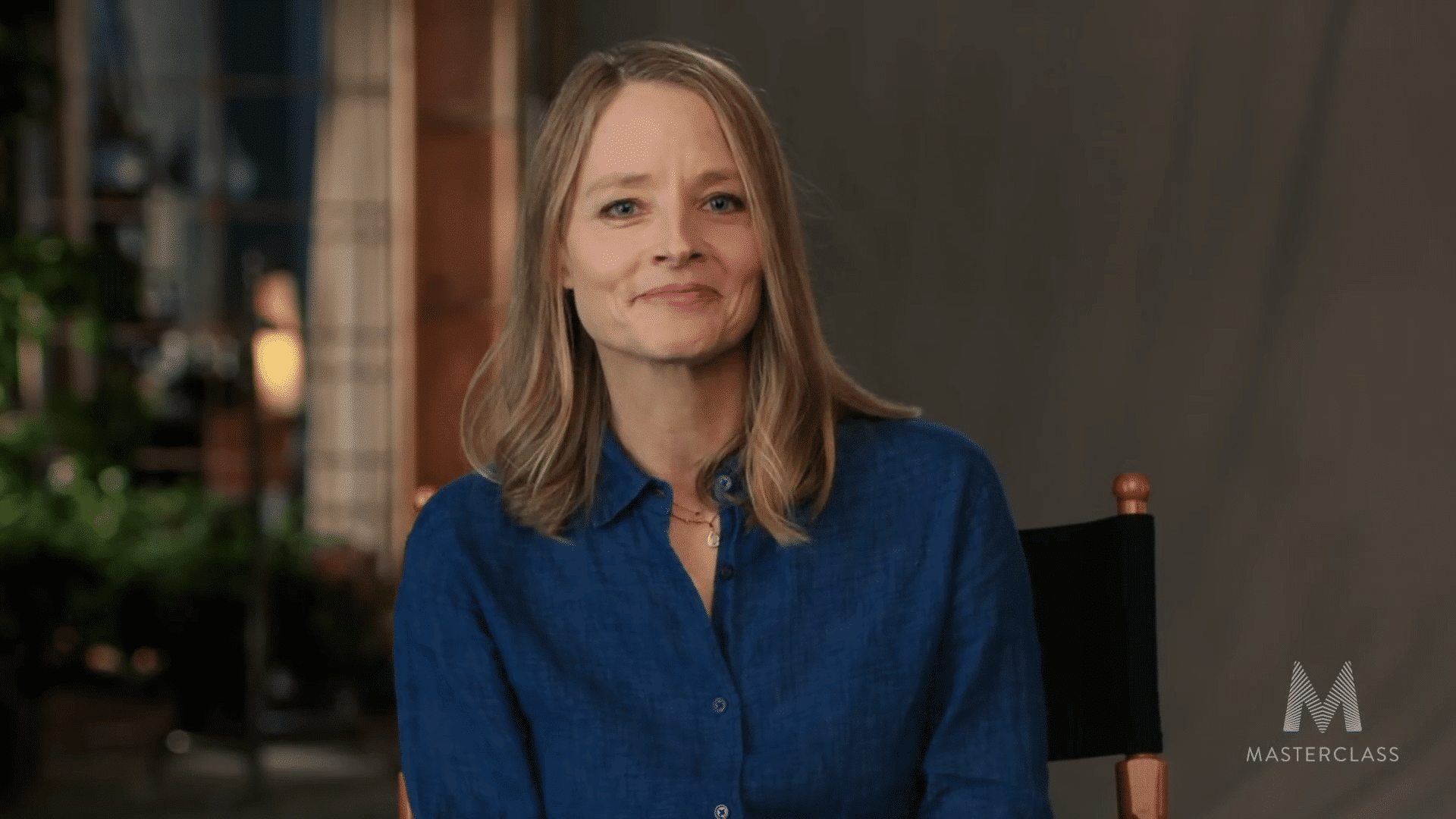 MasterClass is a company that offers online courses in a wide variety of disciplines. In the few years they have been around they’ve made waves for attracting some big names to the platform. You can learn cooking from Gordon Ramsay, singing from Christina Aguilera, screenwriting from Aaron Sorkin, and of course filmmaking from the likes of Werner Herzog, Martin Scorsese (our review) and now Jodie Foster.

But what are you getting for your money, and just how useful is the Jodie Foster Masterclass for an aspiring director?

The first few lessons in the Jodie Foster Masterclass cover the big picture of directing:

The Jodie Foster Masterclass then takes a slightly more practical focus than the Martin Scorsese Masterclass, tracking the development of a short film to show how a director works. Jodie Foster explains how the inspiration for the idea came from her personal experience.

Several lessons then show the process of transforming this inspiration into an actual film. Two lessons show how Jodie Foster workshops the script with a screenwriter, and further lessons show how she would prepare a shotlist, storyboard and schedule.

The downside is that, after seeing all the preparation, we don’t see this short film actually being made. It would have been useful to see the same example used for lessons on casting, shooting and editing.

The insight into collaboration, especially the relationship between writers and directors, is useful, but following this project from script to screen could have also brought in cinematographers, actors, producers, editors, and so on.

Instead, the examples for these aspects of filmmaking are drawn from Jodie Foster’s films MONEY MONSTER and THE BEAVER, with references to the fairly forgotten LITTLE MAN TATE and HOME FOR THE HOLIDAYS. (Although the latter definitely does have its fans.)

Home For The Holidays (1995) - Official Trailer

These films weren’t the most acclaimed, but on some level it doesn’t matter. As the Jodie Foster Masterclass reveals, a great amount of work and dedication and thought has still gone into every moment and every frame.

She also backs up her advice with examples from the better-known films she’s acted in.

The role of a director in TV is often different to their role in film. Jodie Foster has directed episodes of HOUSE OF CARDS, ORANGE IS THE NEW BLACK and BLACK MIRROR.

There are a a few behind the scenes images showing her directing them, but it would have been interesting for the Jodie Foster Masterclass to touch on these experiences and how they differ from film.

It’s in this area that the Jodie Foster Masterclass shines. Like other actors turned directors, Jodie Foster has decades of relevant experience behind her.

She knows, first-hand, what actors want to and need to hear. Her first piece of advice – that directors should try acting themselves – is spot on.

She also likens directing actors to parenting. It might sound patronising, but coming from an acclaimed, award-winning actress, one who’s directed George Clooney, Julia Roberts, Jennifer Lawrence, Robert Downey Jr., et al, it’s worth trusting her on this one.

Like the Martin Scorsese Masterclass, the Jodie Foster Masterclass workbook is available to download in individual chapters, one for each lesson. It’s also available in one solid PDF document, which makes it a bit easier to navigate and go between lessons. Exercises will often refer back to previous exercises (e.g. “Rewatch the film you chose from Chapter 5”), so it’s best to go in order.

The most interesting exercises revolve around creativity. In one lesson, Jodie Foster explains how she would have made the film THE MARTIAN personal to her – keeping the same premise but changing the tone and emphasis of the story.

This exercise is a great way to draw inspiration from films around you without being derivative. (And, important for working in the industry, being diplomatic about whether you liked other people’s work!)

As the Jodie Foster Masterclass goes on, the exercises focus more on how to apply what you’ve learned from studying other films to your own work.

Making that jump from theory into practice is a difficult one, and it’s one inevitable downside of the Masterclass format that it’s entirely up to the class participant to carry it out.

These extras really need be consulted alongside their respective lessons in order to make sense. Her storyboard in particular is hard to decipher without her accompanying explanations. (Again, this is part of the lesson, that it doesn’t matter how well you can draw when creating storyboards just for your own use.)

As with the Martin Scorsese Masterclass, participants are encouraged to comment below each lesson and participate in the “Hub”, a community forum.

However, while they begin with enthusiasm the comments definitely trail off as the class goes on. A few people do share their response to the exercises, but these can be quite personal so it’s understandable to keep them private.

Instead, most comments are just expressing simple enthusiasm or are self-promotion.

Similarly, some class participants do share their work on the Hub, but it’s mostly a general discussion forum and not particularly active.

Masterclass is not a substitute for building a real life network and community around you, especially as course participants come from all over the world and take the class at different times.

The MasterClass courses are all well produced and presented. There are fewer lessons in the Jodie Foster Masterclass (18) than in others. However, they vary in length, with the more in-depth ones running up to 20 minutes, so the overall class time evens out.

The exercises can take as much time as you’re willing to give them, but the more dedicated will find it the most rewarding.

There’s an ‘Office Hours’ feature for Jodie Foster to view student work and questions and offer feedback, but it’s not clear if or when there’ll be content added there.

Jodie Foster Masterclass – Should I Take It?

The Jodie Foster Masterclass offers a different perspective on directing. As you might expect, there’s a great focus on actors and how to work with them. Structuring many of the lessons around developing a short film, even though it’s never made, is a great conceit.

This is far closer to participants’ experiences than making a big Hollywood film full of stars.

Jodie Foster might be less of an auteur name director compared to others who teach Masterclasses. But while directing is an art, it’s also a craft and a leadership position. Working well with others is a severely underrated skill for a director to have, and it’s learning about this that makes the Jodie Foster Masterclass worth taking.

Disclaimer: this article contains affiliate links which will result in us being paid a small commission if you purchase the product in question. We are not being reimbursed for this review and would not write it unless we honestly believed in the value of the product.