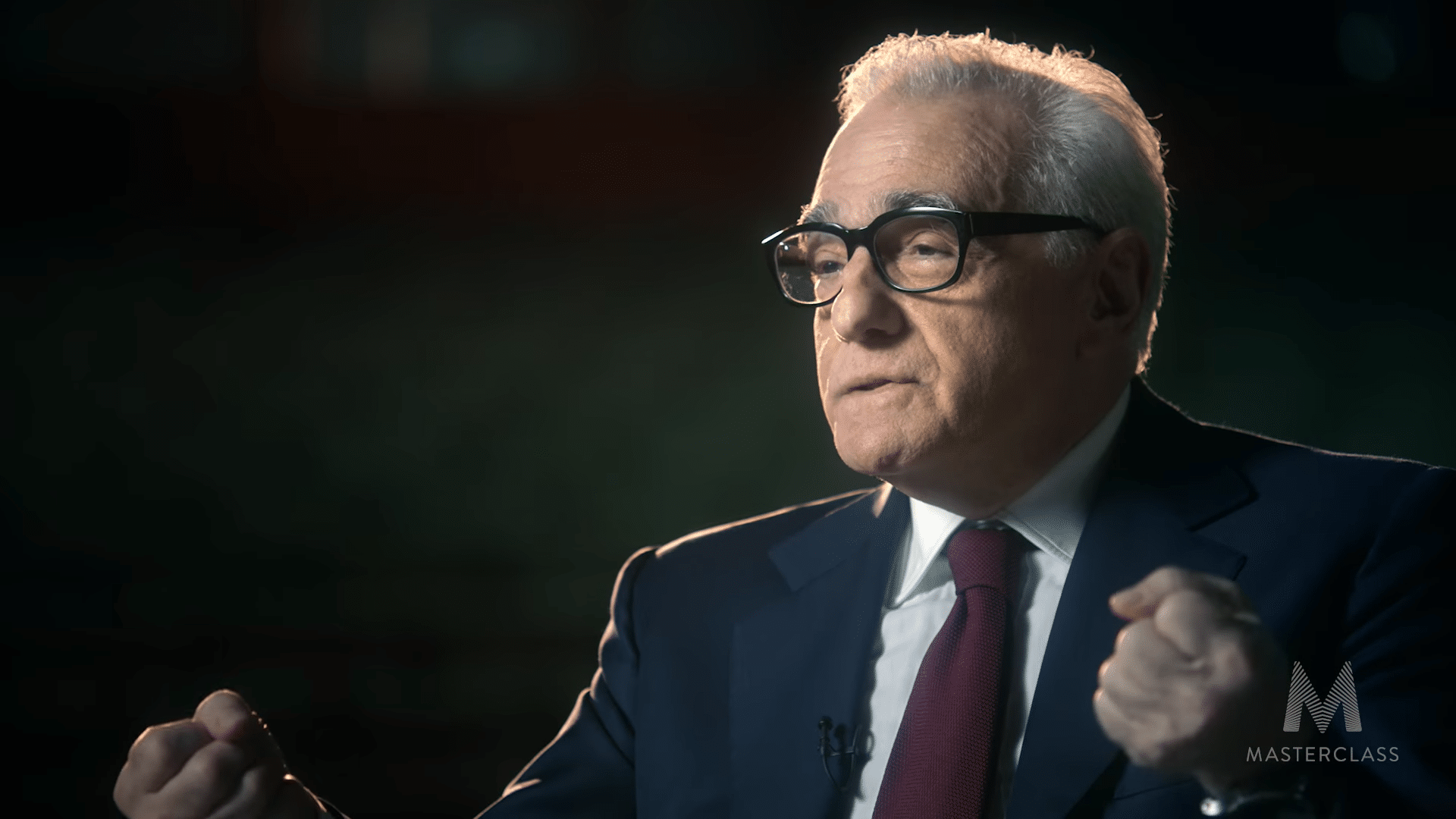 If you’ve recently searched for or liked anything online that’s filmmaking related, you’ve probably seen ads pop up for a Martin Scorsese Masterclass.

But what is it exactly, and crucially is it worth the price of admission?

MasterClass is a fairly new company offering online courses in a wide variety of disciplines. In the few years they have been around they’ve made waves for attracting some big names to the platform. You can learn cooking from Gordon Ramsay, singing from Christina Aguilera, screenwriting from Aaron Sorkin, and of course filmmaking from the Martin Scorsese Masterclass.

It would seem to put lie to the old adage that “those who can’t do, teach.” Martin Scorsese is still at the top of his filmmaking game.

But teaching, especially online, without the personal interaction of real space, is a different skill altogether.

Can those who do, teach?

The Martin Scorsese Masterclass takes the form of 30 video lessons, each accompanied by its own workbook.

The video lessons are mainly interviews, interspersed with clips from Scorsese’s films and others to illustrate his points. While he is a strong, eloquent speaker, we don’t see his approach to directing on set in person.

The result is that the videos can feel a little repetitive in terms of visuals and sound, even when the content of what Scorsese is saying differs from lesson to lesson.

The temptation is to speed through all of the video lessons in as few settings as possible, but doing this makes the videos and his words blur together.

Instead, it’s best to space them out (there’s no time limit to complete the class) and to take notes as if he were lecturing in person.

Making of and behind the scenes documentaries used to be standard on DVD releases, but given that they’ve declined in the age of streaming, it would have been interesting to see Scorsese directing firsthand, to see his advice put into practice. (Presumably the class was filmed before he began shooting THE IRISHMAN.)

Still, in terms of the topics they cover, the classes are quite comprehensive:

More ineffable but just as – if not more important – are the people skills and ingenuity it takes to be a director. Lessons also cover:

There are also several more theory-based lessons, where Scorsese breaks down scenes from classic films. These lessons might strike some participants as too theoretical or too academic, but one of the pitfalls many beginning filmmakers make is not watching enough, not understanding what else is out there and what has come before.

It’s possible to go through a three or four year filmmaking degree and still not fully appreciate this. However, if you don’t understand what images mean and how they mean things, what hope do you have of constructing meaningful images of your own?

This is perhaps the most valuable aspect of the Martin Scorsese Masterclass. It’ll help you think about how to see and ‘read’ images and how to apply that to your own work.

The workbooks build on the lessons with reading and viewing recommendations and exercises to complete in your own time. Scorsese hasn’t written the workbooks or set the exercises himself, although he presumably signed off on them as they include materials from him such as storyboards.

Instead, each workbook recaps the lesson and takes it as a launching off point for further viewing and work to apply to your own ideas and projects.

Some of the background info they present is slightly redundant. If you’re taking this class in the first place you will have already heard of Scorsese and his filmography. You might have already heard him talk about his early years, his favourite films and his formative cinema experiences, as he’s made a couple of documentaries on the subject (about American and Italian movies).

Another disadvantage of this being an online course is, of course, that there’s not going to be any personal interaction between you and your tutor. Martin Scorsese can’t come to your short film set and give you personalised advice. It’s up to you to follow the exercises and carry out the practical side.

Participants are encouraged to share their work, ask for help and advice and start discussions in the comments for each video. However, this is not the most useful feature.

While many of those taking the class are professional and sensible, the comments can become a little swamped with self-promotion or beginners confident that their latest short film is genius. It doesn’t inspire confidence in the community’s ability to offer good feedback.

Other participants take the class at different times and could be anywhere in the world. The Martin Scorsese Masterclass is not going to be a substitute for meeting people and networking in the real world. Likewise, the community forum is not hugely active and has members from across all different classes.

This is not a major problem, as the main selling point of the course is the lessons themselves. Additionally, as Scorsese says, to start making your own short films you need to find collaborators interested in other aspects of filmmaking – camera, sound, editing, and so on. Presumably, most of the other class participants are aspiring directors themselves, and not the most useful contacts to make.

It’s quite possible however, as more and more people take the class, more professional connections can and will be made through the platform. But it shouldn’t be your main reason for taking the Martin Scorsese Masterclass.

Similarly, there is an ‘Office Hours’ feature, where it’s promised that you can “Watch Martin provide feedback on assignments and answer student questions”, but there doesn’t appear to be any content there yet, even though the course has been available for some time.

The MasterClass courses are all slickly produced and presented, with high production values. The video lessons vary in length, but put together they’re well over 4 hours. Following all the exercises will likely triple that, if not more.

The price is less than what in-person classes would cost, as you’d hope and expect, but it might still seem steep compared to the price we’ve come to expect from the internet (i.e. free).

It is a one-time purchase for lifetime access, or an annual subscription for access to every MasterClass, although it’s not clear if there’ll be any added content further down the line. (More likely is a second, separate Masterclass, as other instructors have done, if Scorsese has the time and inclination.)

As always, it’s worth being canny and looking out for promotions and deals through the year, asking for it as a present or to split it with a filmmaking friend. The shared experience, bouncing ideas off someone else in person, could even enhance the course’s value.

Martin Scorsese Masterclass – Should I Take It?

The Martin Scorsese Masterclass can’t be taken passively. It will help develop your vision as a director, but it can’t – and shouldn’t – tell you what that vision should be. That will only come through time and the hard work of watching, studying and making films.

The Martin Scorsese Masterclass is a great place to start a filmmaking education, but its value depends on your commitment. Like any film school or educational experience, you can only get out of it what you put into it.

If you enjoyed this article, why not check out our 40 filmmakers over 40 article?

Disclaimer: this article contains affiliate links which will result in us being paid a small commission if you purchase the product in question. We are not being reimbursed for this review and would not write it unless we honestly believed in the value of the product.