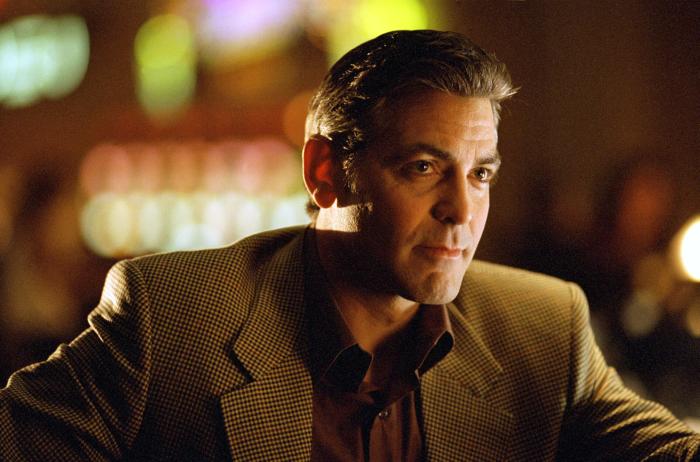 In our Genius Character Reveals series we examine scenes and moments where a film or TV show reveals a tremendous amount of character information in a compressed amount of screen time. This instalment focuses on Danny Ocean (George Clooney), the mastermind of a complex casino heist in Steven Soderbergh‘s OCEAN’S ELEVEN.

OCEAN’S 11 is a 1960 heist film set in Las Vegas, starring many actors of the ‘Rat Pack’ including Frank Sinatra, Dean Martin, and Sammy Davis Jr.

Remaking it for the 2000s, Warner Bros. and director Steven Soderbergh opted for a similarly star-studded cast. George Clooney, who had previously collaborated with Soderbergh on OUT OF SIGHT, took the lead role.

However, no amount of stars can save weak material. OCEAN’S ELEVEN has an incredibly sharp and smooth script, written by Ted Griffin (MATCHSTICK MEN, TERRIERS).

Who is Danny Ocean?

When Danny Ocean is released from prison, he soon violates his parole by meeting up with his old friend Rusty (Brad Pitt). Together they put together a team and a plan to rob three Las Vegas casinos on the night of a big boxing match.

How is Danny Ocean’s character revealed by the action and dialogue?

Danny Ocean, in prison fatigues, enters an empty room with a single chair.

He states his name for the record. A voice asks him :

Mr. Ocean, the purpose of this meeting is to determine whether, if released, you are likely to break the law again. While this was your first conviction, you have been implicated, though never charged, in over a dozen other confidence schemes and frauds. What can you tell us about this?

Danny Ocean replies: “As you say, I was never charged.”

They go on to ask him whether he would re-offend. He tells them that he got caught because his wife left him and he “got into a self-destructive pattern.”

They ask what he would do if he were released.

Danny Ocean responds: “I don’t know. How much do you guys make a year?”

Later, at the check-out station, Danny Ocean picks up some mail from his wife. The guard asks him what it says.

What do we learn about Danny Ocean in this scene?

Danny Ocean has been in prison for some time, although his tone and the dialogue suggest it wasn’t for a violent crime. (The voice describes them as “confidence schemes and frauds.” The script specifies that the prison is minimum security.)

Despite his imprisonment, he retains his dry, arch sense of humour. Even on the page, without George Clooney’s smooth delivery, there’s a charm to his dialogue. The audience can understand how this man has operated so successfully for so long as a con man.

He has a keen eye for technicalities and loopholes. Questioned about other crimes, he points out he was never charged for them.

This scene also briefly sketches out his backstory. His wife left him, leading to him getting caught and imprisoned. Danny Ocean shows a hint of vulnerability (“I was upset”) but again he covers over it with humour. (“She already left me once.”)

It’s as much information about his past and past relationship as the audience need at this point.

Ocean’s Eleven is a masterclass in how to write a large ensemble. Each character earns their own individual introduction (apart from the Malloy brothers, who share). The result is not only entertaining but makes each character easier to identify and follow.

The script strongly associates each character with the environment in which it introduces them. In Danny’s case, it’s prison, a reminder of the stakes of his con. Even visiting Rusty in California, Danny could be sent back to prison.

For a film this plot and dialogue-heavy, OCEAN’S ELEVEN is remarkably light on its feet. Essentially, there’s movement in every scene.

Here, the scene could just as easily begun with Danny Ocean already sat at his parole hearing. Instead, he walks in. This also subtly suggests a power dynamic. Danny Ocean is in control.

The first scene also leaves as early as possible. Because it ends on a punchline and question, it sparks the audience’s curiosity. Will Danny get out of prison and what will he do?

The cut to the check-out station, where he picks up his divorce papers in the mail, answers both questions. He’ll get out of prison and, despite his disavowal to the parole board, will somehow come into his ex-wife’s orbit again.