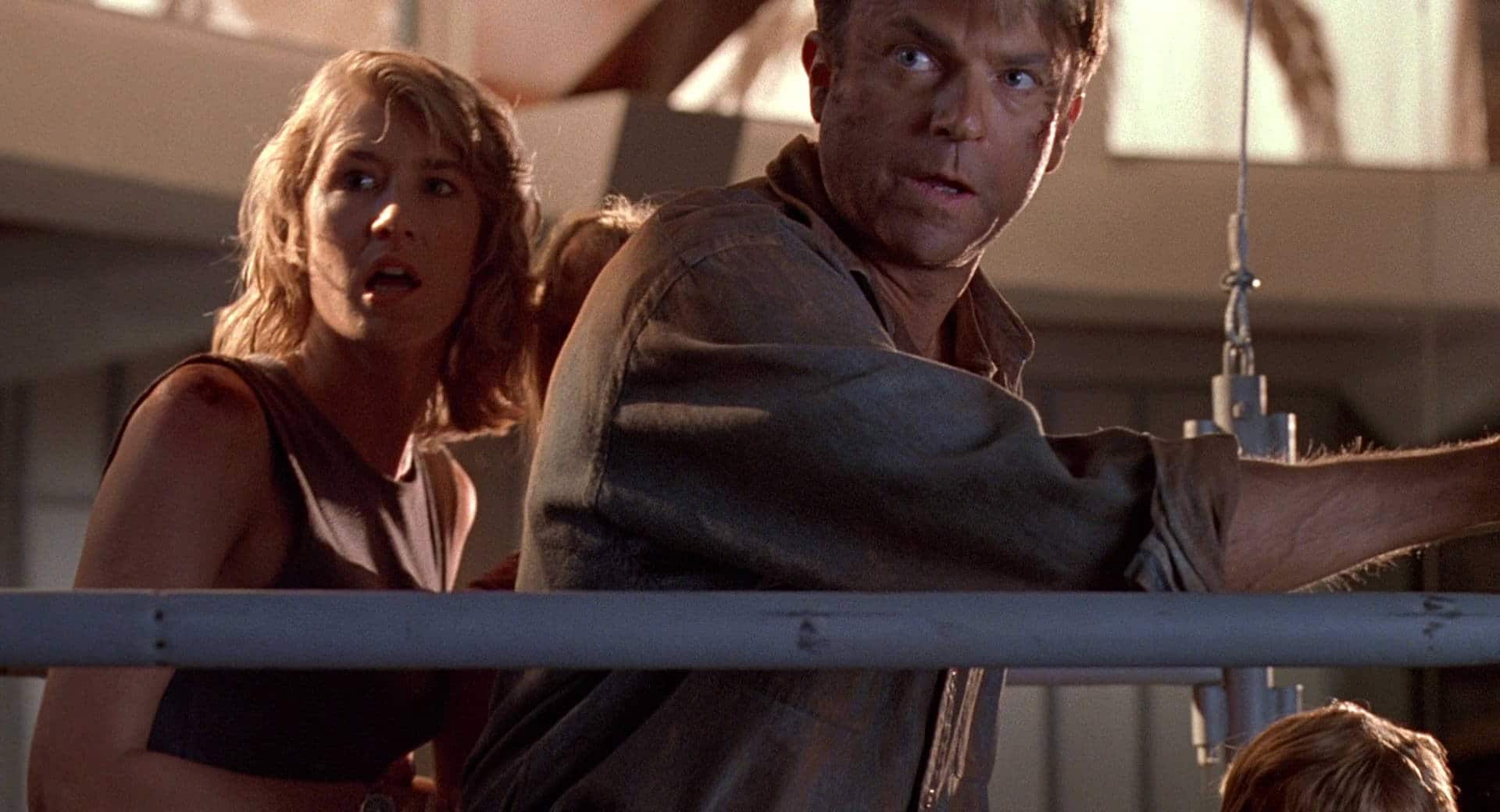 In our Genius Character Reveals series we examine scenes and moments where a film or TV show reveals a tremendous amount of character information in a compressed amount of screen time. This instalment focuses on Dr. Alan Grant (Sam Neil), the palaeontologist hero of Steven Spielberg‘s dinosaur horror-adventure blockbuster JURASSIC PARK.

Adapted from the novel by Michael Crichton (WESTWORLD), JURASSIC PARK was directed by Steven Spielberg as part of a deal that would allow him to make the riskier Holocaust drama SCHINDLER’S LIST.

Crichton himself wrote a script draft, which was then much rewritten by David Koepp. At one stage the characters of Alan Grant and Ian Malcolm were merged.

Koepp would go on to write the sequel (THE LOST WORLD), WAR OF THE WORLDS and INDIANA JONES AND THE KINGDOM OF THE CRYSTAL SKULL for Spielberg.

Although it’s known for its pioneering CGI effects, JURASSIC PARK’s success greatly stems from its writing and characters. Several of its sequels, struggling to hit the same mark, rely on bringing back familiar faces.

Who is Alan Grant?

Hammond wants them, along with his grandchildren, to test and certify his island park where he has cloned dinosaurs from ancient, preserved DNA.

How is Alan Grant’s character revealed by the action and dialogue?

JURASSIC PARK opens with a crew in a jungle trying to wrangle a velociraptor. When a velociraptor kills a handler, the investors in the park, represented by lawyer Donald Gennaro, want a safety inspection before it opens. Gennaro visits Juanito, on a dig in an amber mine, and tells him they want Alan Grant.

Asked why, Juanito holds up a piece of amber with a perfectly preserved fly. “Because Grant’s like me… he’s a digger!”

Cut to Montana. A brush uncovers a fossil. Then many hands and tools, revealing a dinosaur.

The man shows them a radar image of the fossil as their team gather round. “This new program’s incredible. Few more years development and we won’t even have to dig anymore.”

Sattler and Grant discuss the specimen. Grant touches the computer, and it flickers. Sattler laughs, “Dr. Grant’s not machine compatible!”

Grant speculates about the connection between dinosaurs and birds. His team laughs. When he explains, a kid complains “that doesn’t sound very scary!”

Grant launches into a long, grisly monologue about how velociraptors stalk and kill their prey, ending with:

“The point is, you are alive when they start to eat you. So ya know, try to show a little respect.”

What do we learn about Dr. Alan Grant in this scene?

Dr. Alan Grant is a highly educated and dedicated palaeontologist.

He’s somewhat sceptical of new technology. He doesn’t understand why he should use new tools when the old ones are just as good.

Grant takes joy in the process of doing things. The fun is in the digging, not in instant results.

He scares the kid who challenges him, showing courage and an unwillingness to back down. He demands respect for his profession.

Grant gets carried away in his monologue, going overboard from his original point. This shows that there is a spark of imagination and inspiration. He has a passion for dinosaurs that goes beyond  academic interest in their fossils.

However, the way he talks about dinosaurs professionally with Sattler is very different. By the time he gets to examining them, they’re just bones surrounded by dust and dirt.

The exchange with the kid launches directly into a conversation between Grant and Sattler about having children of their own. This offers a hint into their private life.

In some ways, JURASSIC PARK is a variation on the Frankenstein story. Many horror films take this as their basis. With the aid of science, man reaches beyond what we were meant to know and is destroyed as a result.

However, JURASSIC PARK is a much less bleak version of Frankenstein. After all, it’s also a family adventure blockbuster, directed by Steven Spielberg. It can’t end with everyone eaten by dinosaurs.

Grant, an old-fashioned scientist, is a strong choice of protagonist. His scepticism of technology makes him a strong counterpart to the billionaire John Hammond who creates the park and to the trendy Ian Malcolm.

As well as his theoretical knowledge, it’s Grant’s resourcefulness and practicality – learned from experience digs – that helps him and the children survive.

However, Alan Grant’s old-fashioned quality is both an asset and a character flaw. He’s a curmudgeon around children, even though it was likely his childhood imagination that first stoked his fascination with dinosaurs.

This sets him up for a satisfying character arc. Visiting Jurassic Park allows him to rekindle that sense of awe and prove himself as a surrogate father.

If you enjoyed this article, why not check out our article about how the character of Elisa is revealed in THE SHAPE OF WATER?