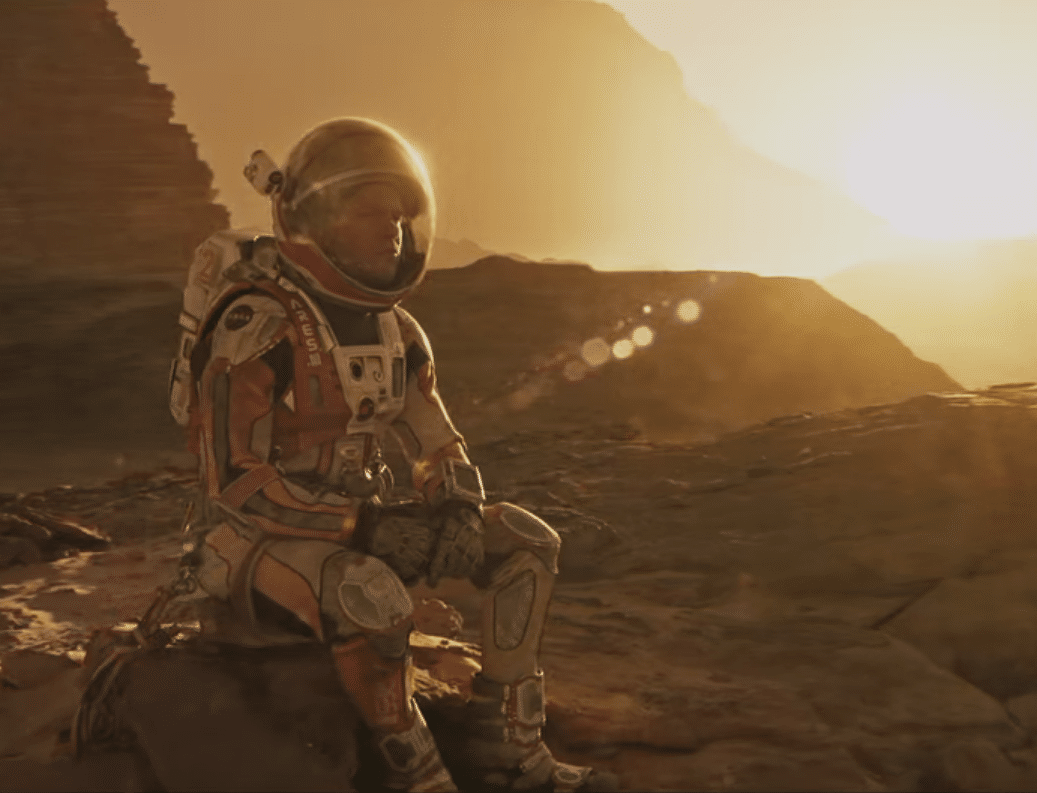 THE MARTIAN was adapted by Drew Goddard (writer-director of THE CABIN IN THE WOODS) from the novel by Andy Weir and directed by Ridley Scott. Both Goddard and Scott were Academy Award-nominated for their work.

It’s the rare big-budget Hollywood film that creates suspense and drama without putting the whole world at stake. Instead, like GRAVITY, THE MARTIAN uses a space setting to update a classic survival story.

A manned mission to Mars is cut short when a storm forces the team of astronauts to make an emergency departure. Mark Watney (Matt Damon), thought dead, is left behind. When he wakes up alone, he has to survive using what equipment has been left behind until his teammates, still in space, and the NASA team on Earth can mount a rescue.

Who is Mark Watney?

Mark Watney is a botanist, mechanical engineer, astronaut. He keeps a running video log of his efforts to make the inhospitable Martian surface more liveable.

How is Mark Watney’s character revealed by the action and dialogue?

THE MARTIAN begins with views of the red planet itself, first from space and then flying over its rugged terrain. The first line of dialogue is from an off-screen Field Commander Melissa Lewis (Jessica Chastain), asking the team to stay in sight and “make NASA proud”.

Mark Watney is the first of them to be introduced on screen, in the middle of collecting soil and rock samples from the Martian surface. Rick Martinez (Michael Peña) jokes that he just discovered dirt, and Mark ribs him about the usefulness of his job. The other team members join in. Mark pushes it slightly too far and Lewis jokingly orders his radio cut off. 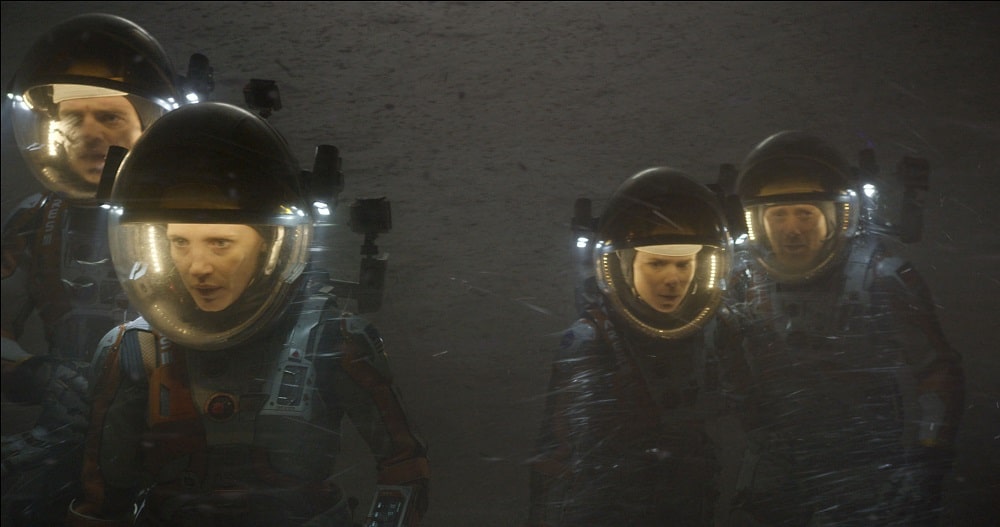 An upgraded storm warning comes in, and it’s going to be worse than they thought. The MAV (Mars Ascent Vehicle) could tip over and they’d be stranded. Mark, now inside the Hab (the Mars Lander ‘Habitat’), says they should wait it out. It’s Lewis’s call, and she decides on emergency departure. Mark disagrees but is overruled.

Braving the storm, they make their way to the MAV. On the way, Mark proposes using cables from the solar farm to shore up the MAV, preventing it from tipping.

Before he can fully explain his plan, he is hit by a piece of antenna and disappears into the storm. Lewis searches for him, to the point where she’s almost left behind herself, but eventually she has to return to the MAV or none of them are leaving Mars.

What do we learn about Mark Watney in these scenes?

The opening sequence of THE MARTIAN shows how well the film uses technical language, or jargon, in relation to the characters. Often writers of science fiction will use clumsy metaphors to explain what’s happening. Even APOLLO 13 does this occasionally:

Like trying to drive a toaster through a car wash.

THE MARTIAN avoids this trope. Instead it embraces the technical dialogue while never leaving the audience behind. Martinez’s joke gives a layman’s explanation of what Mark is doing, something the audience can easily understand (collecting dirt).

At the same time, it establishes the relationship between the characters. Even if Mark’s explanation goes over the audience’s head, his passion, his expertise and his sense of humour, even about his work, are understandable.

– In grid section fourteen twenty-eight, the particles appear predominantly “coarse,” but as we move to twenty-nine, the particles are much finer, and should be ideal for chem analysis.

This exchange, the first few lines of dialogue, immediately reassure the audience that they are in safe, capable hands. Goddard and Scott know exactly how much of the science needs to be understandable.

They know when Mark needs to be an expert and when he needs to be a normal guy. They are experts at making him and his work understandable without breaking the suspension of disbelief or being patronising to the audience.

Bright-eyed and optimistic. Another day at the office.

This is how to make an unfamiliar character in an unfamiliar situation immediately relatable. No-one in the audience has been to Mars, and very few will be botanists or astronauts. Everyone has some idea of their dream job and how it probably sounds weird or boring to someone else.

The opening also subtly establishes Mark as the protagonist within the film’s ensemble. This is important as the number of characters will only grow once the Earth-set story-line begins.

Mark is introduced as a team member but also a distinct character in his own right. The other characters have senses of humour too, but he takes his slightly too far.

He also doesn’t want to leave Mars. This disagreement with his Commander shows how important his work is to him and that he’s unafraid to question authority when he feels strongly.

His proposed method of stopping the MAV from tipping shows his ingenuity. It’s this kind of practical thinking, re-purposing the materials around him, that allows him to survive on Mars for so long.

The opening scene of THE MARTIAN wastes no time in introducing the main problem, the storm that strands Mark Watney on Mars. It’s the epitome of the “enter late, leave early” maxim, which applies equally to stories as it does to scenes.

There’s plenty of time for character development later, when Mark is alone and narrating his exploits to camera.

Still, Mark’s character is clearly established. Even without being played by a movie star, the script is already making a case for him as the protagonist.

The character traits introduced here – humour, enthusiasm, knowledge, resourcefulness – not only endear him to the audience but become vital for his survival.

There’s no clear antagonist in the film. Mark doesn’t even have a major flaw. It would have been eas  jgy to include one, for example, if his cut off radio meant he didn’t realise the storm was coming, leaving him stranded. His sense of  humour would get him in trouble and add to Lewis’s guilt at leaving him behind.

But for the story THE MARTIAN is telling, this would have been too contrived and at opposition to the tone of the film. THE MARTIAN is a survival story about man versus nature and about smart people working together and using technology to overcome problems. Mark, charismatic and eternally optimistic, is the perfect character with which to tell this story.