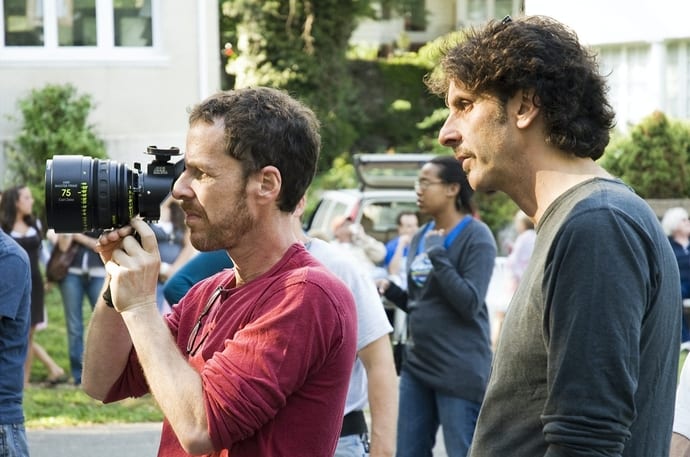 Brothers Joel and Ethan Coen have cemented themselves as one of the most influential filmmaking duos of all time. Through an array of acclaimed movies including Fargo (1996), True Grit (2010) and The Ballad of Buster Scruggs (2018), the brothers have a reputation for blending genres and writing convoluted plots with eccentric characters. In order to bask in the wisdom of this iconic filmmaking duo, we’ve compiled 15 amazing Coen brothers quotes that are sure to inspire all budding screenwriters and filmmakers.

Born and raised in Minnesota, Joel and Ethan Coen had a keen interest in cinema during their childhood. Inspired by the movies they watched on television, Joel bought a Vivitar Super 8 camera to shoot home movies, starring their friends.

For many years the Directors Guild of America (DGA) regulations prevented the brothers from sharing directorial credit due to the rule that only one person may be credited director. To work around this, the pair agreed that Joel would be credited as director, Ethan credited producer and both given the screenwriting credit. “Roderick Jaynes”, a pseudonym they shared, was credited as editor.

Joel enrolled in the undergraduate film program at New York University before landing himself a job as an assistant editor on low budget horror movies. Ethan took a different direction, studying Philosophy at Princeton University. After Ethan graduated, the brothers started writing independent films, their first being Blood Simple (1984), financed with funds raised by themselves.

Despite numerous awards including four Oscars, the brothers had disappointment too. The Hudsucker Proxy (1994) lost $14 million at the box office and received mixed reviews. And despite critical acclaim since, The Big Lebowski (1998) initially underperformed.

It is undeniable that hard work led to their success. And a dedication to making their own productions with little financial support caught the eyes of major studios, bringing opportunities to further their profile whilst still remaining auteurs.

We’ve compiled 15 amazing Coen brothers quotes to give an insight into the creative minds of the Coen brothers and inspire your own creative process.

2. “You love all your characters, even the ridiculous ones. You have to on some level; they’re your weird creations in some kind of way. I don’t even know how you approach the process of conceiving the characters if in a sense you hated them. It’s just absurd.” – Joel

3. “The question is: Where would it get you if something that’s a little bit ambiguous in the movie is made clear? It doesn’t get you anywhere.” – Joel

5. “The characters are the result of two things. First, we elaborate them into fairly well-defined people through their dialogue, then they happen all over again, when the actor interprets them.” – Joel

8. “And when you see it the first time you put the film together, the roughest cut, is when you want to go home and open up your veins and get in a warm tub and just go away. And then it gradually, maybe, works its way back, somewhere toward that spot you were at before.” – Joel

9. “I think when you watch the dailies, the film that you shoot every day, you’re very excited by it and very optimistic about how it’s going to work.” – Joel

10. “We’re not big on taste. And actually, if you don’t pander to undue sensitivities, then it ends up usually not being much of a problem.” – Ethan

12. “Sometimes, in certain stories, I think we know at the outset essentially what the tone is going to be, or it becomes important that we’re groping toward some kind of story with a certain kind of tone that we both get somehow. But I don’t think how that’s combined with other elements is ever in any way overtly discussed.” – Joel

13. “When you do a writing job for a studio, one of the things you want to do is satisfy the expectations of your employer. That’s a little bit different than when you sit down and write something to satisfy yourself, because then you’re the employer.” – Joel

14. “We don’t outline, so we don’t have prospective tasks to divide up. It’s just, we start at the beginning and talk the first scene through, write it up, proceed to the next.” – Ethan

15. “Being non-commercial is never an ambition. Movies come together at different points for fortuitous reasons. You do them as you get the opportunity, as opposed to doing them when you choose to or design to.” – Ethan

Enjoyed our list of Coen Brothers quotes? Why not have a look at our other quotes articles, such as Wes Anderson and David Fincher.

This article was written by Jamie McIvor and edited by IS Staff.