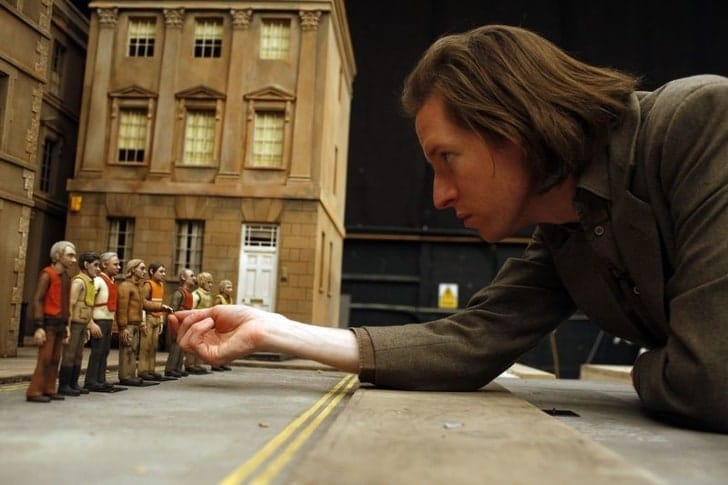 Where do you start with Wes Anderson? The acclaimed director is one of the most distinctive and charismatic filmmakers of all time. And whilst he typically doesn’t spill his guts about his process, the few Wes Anderson Quotes there are demonstrate part of why he’s so distinctive and liked.

Wes Anderson grew up in Texas and it was there, at the University of Texas at Austin, that he met a collaborator that would become a crucial and regular feature of his work, Owen Wilson.

In 1992, at the age of 23, together with Owen and his brother, Luke Wilson, Wes made a short, Bottle Rocket. The success of this venture led them to adapt this short into a feature version four years later. Whilst the film is now considered a classic, at the time it performed poorly at the box office and didn’t necessarily immediately guarantee its creators a career in film, with Owen Wilson even considering joining the Marines as an alternative career.

However, eventually, it was enough for Anderson to make his next film, Rushmore, for which he garnered a $10 million budget. The film was a critical and commercial success, earning almost double its budget at the box office and launching Anderson’s career.

Rushmore allowed Anderson to get into the big leagues. Along with his early collaborators, Owen and Luke Wilson, Anderson gathered a cast of titans for The Royal Tenenbaums. The portrayal of the dysfunctional and charismatic family, the Tenenbaums, would be an instant hit with audiences and critics. It arguably garnered instant classic status and earned more than $70 million at the box office worldwide.

The Royal Tenenbaums would remain Anderson’s most lauded work for a while. The Life Aquatic With Steve Zizou and The Darjeeling Limited didn’t quite hit the highest notes critically. However, they still managed to continue Anderson’s ever-growing reputation as an auteur.

A Versatility of Work

It was perhaps both a surprise and not a surprise at all when Wes Anderson turned his hand to stop-motion animation via Fantastic Mr. Fox (and later with Isle of Dogs). It makes sense that an artist with such fine attention to detail would seek out a form in which attention to detail is not only sought after but entirely necessary.

The beautiful crafting of the animation in both films perfectly represents Anderson’s brilliantly unique style. Everything is crafted within an inch of its life and no frame exists in imperfection. It’s this style that has made Wes Anderson one of the most popular living filmmakers.

And moreover, it’s a style that has extended his reach beyond just indie film, with him entering the wider cultural consciousness as more than just a director. He designed a cafe, Bar Luce, in Milan, for example, and the Instagram account Accidentally Wes Anderson has spawned not only a successful book but a whole movement.

Anderson’s live-action films since Fantastic Mr Fox – Moonrise Kingdom, The Grand Budapest Hotel and The French Dispatch – have helped to continue his legacy and perhaps win over the lingering critics that questioned his ability to make solid, live-action features that were more than just their beautifully crafted, aesthetic parts.

How does one even get into the mind of such a unique director and understand his process? Wes Anderson is certainly one of those filmmakers that feels unapproachable in that regard – an artistic alien placed on this planet to make work that is unlike anything else.

However, reading through the Wes Anderson quotes we’ve compiled it’s easy to see that his carefully crafted work is matched by a carefully crafted process. The quotes are fascinating windows into this process and to understanding such a unique creative mind.

1. “I have a way of filming things and staging them and designing sets. There were times when I thought I should change my approach, but in fact, this is what I like to do. It’s sort of like my handwriting as a movie director. And somewhere along the way, I think I’ve made the decision: I’m going to write in my own handwriting.”

2. “I want to try not to repeat myself. But then I seem to do it continuously in my films. It’s not something I make any effort to do. I just want to make films that are personal, but interesting to an audience. I feel I get criticized for style over substance, and for details that get in the way of the characters. But every decision I make is how to bring those characters forward.”

3. “People seem to think that my movies are so carefully coordinated and arranged – and in a lot of ways, they are – but every single time I make a movie, I feel that every director makes these choices. You make choices about your script, you make choices about your actors, and how you’re going to stage it, and how you’re going to shoot it, and what the costumes are going to be like, and in every single detail, you make that decision. And for me, what ends up happening is, I wind up surprised at the combination of all these ingredients. It never is anything like what I expected.”

4. “That’s the kind of movie that I like to make, where there is an invented reality and the audience is going to go someplace where hopefully they’ve never been before. The details, that’s what the world is made of.”

5. “I’ve never had a movie that got great reviews. I’ve had movies that got different levels of good and bad reviews, but you can more or less count on plenty of bad reviews.”

6. “It can be nice to read somebody just gushing. That certainly can make you feel, ‘Oh, boy – I really got through to this person’. But often, even in a review where somebody’s gushing, you’re thinking, ‘Oh, well, they think I did that on purpose’, and you know, maybe if they actually understood how that happened, they wouldn’t like it as much. Plus, if you decide to really get into reading reviews, you have to know there’s a possibility that you’re gonna turn a corner and read a stunningly horrible review that is just gonna be a distraction for you. Really, what you want to do is get on to the next movie, and continue with whatever is next.”

7. “If I have ideas, I want to put them in the movie. It’s not a minimalist approach at all but I feel like it’s for the audience. It’s about seeing how much texture we can give it and seeing how many things are there for people to latch on to… I just want to do it the way I want and I feel like it won’t be helpful for me if I start worrying about that. I just have to follow my instincts. Everyone is going to respond differently to it and everybody’s right – that’s their point of view. That’s how the story intersects with their lives.”

8. “When I see the first dailies on any movie, I usually feel that I had no idea how this combination of ingredients was going to mix together, what it was going to produce.”

9. “There’s no story if there isn’t some conflict. The memorable things are usually not how pulled together everybody is. I think everybody feels lonely and trapped sometimes. I would think it’s more or less the norm.”

12. “I guess when I think about it, one of the things I like to dramatise, and what is sometimes funny, is someone coming unglued. I don’t consider myself someone who is making the argument that I support these choices, I just think it can be funny.”

13. “In the ’70s, you could just open it small and it could slowly build, and it would stay around for a long time. And that was a way that a movie that might be considered a total art movie today might find its way into the mainstream, because it would be given time to develop. And now, it’s impossible. It doesn’t work that way anymore. You can’t force it that way, even. It won’t last.”

14. “The sad thing is that watching a movie on video is not the same. And also, when something is discovered by people in movie theaters, it’s discovered by people who are all together, and there’s a sort of feeling of an event about it. And when it’s on video, it’s like something is being discovered in the library or something. It’s like having a second life in public libraries. It’s just like individuals, and it’s less of a… We can’t participate in it the same way.”

15. “Every time you do a take on a movie, you’re not sure if it’s going to succeed. Even if you have a great cast, like we had, every scene you’re kind of waiting for the release. ‘Oh, yes; it happened. We got it!’ There’s always the possibility that it’s just not going to work.”

Enjoyed our list of Wes Anderson quotes? Why not have a look at our other quotes articles, such as Nora Ephron and Guillermo del Toro.