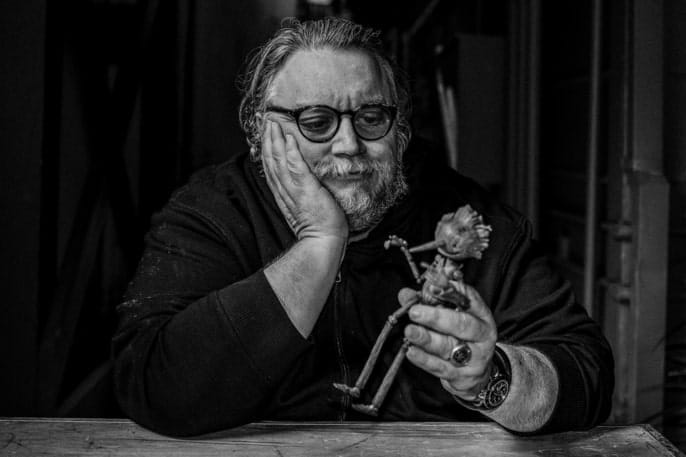 Since his debut film, Cronos, Mexican filmmaker Guillermo del Toro has been captivating audiences with a unique blend of fantasy and realism. We’ve compiled 15 Guillermo del Toro quotes that demonstrate that on top of being a wonderful filmmaker, he’s also someone that can provide wisdom and inspiration for all artists, from screenwriters to filmmakers to painters.

Guillermo del Toro was reportedly making films from a very early age, experimenting with a Super 8 camera as an eight-year-old growing up in Mexico. It would obviously be a while before he would make filmmaking his profession, but not too long.

At 33, Del Toro was attracting buzz and was given $30 million to make Mimic. It was on this film that his strong creative vision asserted itself, so much so that he clashed with the film’s producers. It was an experience that del Toro has said almost put him off Hollywood completely.

However, luckily for us, del Toro would go on to establish himself as a visionary in Hollywood, helming big-budget features such as The Devil’s Backbone, Blade II and Hellboy.

After these big hits, del Toro afforded himself the creative freedom to make something more personal, wowing audiences with instant classic Pan’s Labyrinth.

Since then Guillermo del Toro has stuck to this formula, oscillating between franchise features and more personal and intimate stories. It’s this blend that makes him so successful, showing the breadth of his talent in telling idiosyncratic stories such as The Shape of Water alongside show-stopping action films such as Pacific Rim.

And with his version of Pinocchio, del Toro shows that the two styles of film needn’t necessarily be mutually exclusive, bringing a personal touch to a world-famous story.

It’s no surprise that such a creative, distinctive cinematic voice has inspiring things to say on everything from filmmaking to politics to childhood. It’s with this in mind that we’ve compiled 15 Guillermo del Toro quotes.

1. “I feel that we have, as Mexicans, two things: one, a natural distrust of institutions. I hate organised religion, I hate organised politics, I hate the idea of the military and the police. Because we grew up distrusting all these sacred institutions, the only thing you have left is a vague, national sense of impending doom. Why do we drink and how are we so merry? Because we know that pretty soon, our time’s up. There is a sense of fatality that makes us pretty chirpy people. You try to live.”

3. “I think once a Catholic, always a Catholic. You never escape. I still have Catholic guilt. It is in its basis a really powerful religion and a really strong set of beliefs. They permeate my work in many ways.”

5. “I love monsters. If I go to a church, I’m more interested in the gargoyles than the saints. I really don’t care much about the idea of normal – that’s very abstract to me. I think that perfection is practically unattainable but imperfection is right at hand. So that’s why I love monsters: because they represent a side of us we should actually embrace and celebrate.”

6. “The idea for me is that if the movie connects with you the way I want it to connect with you, you should be experiencing both the horror and the wonder as a child would. From a child’s point of view. When we’re kids, brutality registers differently than when we are adults. Because as adults, we get too used to violence.”

8. “You live and die two or three times making a movie. First, you write it, and the first pivotal moment comes when you can get it made. The second is in the process of making it, when the movie reveals itself to you, its flaws and its virtues. Then the most unnerving moment is when that movie is then launched into the world. It’s like bringing your kid to the first day at school and somebody points out that it has bowlegs, it is cross-eyed, or it’s gorgeous. You feel very exposed.”

9. “I feel that your ambitions should always exceed the budget. That no matter what budget you’re doing, you should be dreaming bigger than the budget you have, and then it’s a matter of reigning it in to the reality. You try to make things count.”

10. “I wish I could have done double the movies I’ve done, but that’s the way it is. Between Cronos and Mimic, I wrote six screenplays. All of them went unproduced, so far. Between Mimic and The Devil’s Backbone, I wrote three screenplays, all unproduced. So I have eight to 10 screenplays written and unproduced. And frankly, some of them are my favorite stories.”

12. “I think we live our lives seeking the shortest route, the closest parking space – everything quick, cheap, fast. And it’s not better. Two-thirds of the satisfaction of getting something is the process of getting it.”

14. “I ache for more time. I buy a book and I start browsing it, and then I have to stop and don’t read for two or three days until I take it up on the weekend. I find I’m waking up really early now, just to read. Waking up at ungodly hours. But I try to keep up, religiously. When I was a kid, it used to be a book a day. Then a book a week. Now it’s like a book every two weeks. But I read every day.”

15. “To me, art and storytelling serve primal, spiritual functions in my daily life. Whether I’m telling a bedtime story to my kids or trying to mount a movie or write a short story or a novel, I take it very seriously.”

Enjoyed our list of Guillermo Del Toro quotes? Why not have a look at our other quotes articles, such as Phoebe Waller-Bridge and Christopher Nolan.