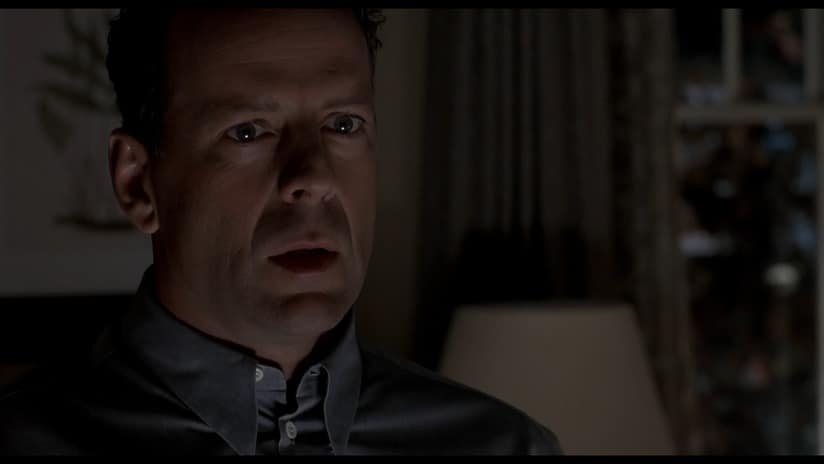 The film: Can there be a man or woman alive who hasn’t watched this film (or at least had the ending spoiled)?! THE SIXTH SENSE was released in 1999, written and directed by the then-unknown M. Night Shyamalan and starring Bruce Willis and another newcomer, Haley Joel Osment. (Shyamalan’s latest, AFTER EARTH, was released in 2013. Reviews were, ahem, mixed…) A winning blend of supernatural drama with shades of horror, THE SIXTH SENSE was a smash despite an unpromising genesis that involved multiple rewrites (the famous twist apparently wasn’t even introduced until halfway through the process) and Disney letting go of the project in a show of its lack of faith for its potential success. Nowadays it’s quite rightly considered a latter-day genre classic.

The plot: THE SIXTH SENSE tells of a workaholic psychiatrist, Dr Malcolm Crowe (Willis) whose wife, Anna (Olivia Williams), feels neglected in their marriage. One night, an intruder – Vincent, a former patient of Malcolm’s – breaks into their apartment and, accusing the psychiatrist of having failed him, shoots him in the stomach. The following autumn, Malcolm takes on another patient, a young boy named Cole (Osment) who shares similar traits to Vincent. In an attempt to banish the ghost of his failure with Vincent, Malcolm tries to help Cole overcome his emotional problems, little anticipating that these will result in the celebrated revelation that the young boy “sees dead people”…

The scene: This scene is the penultimate of THE SIXTH SENSE, right before the big sucker punch denouement, but for this viewer’s money is the more affecting of the two. While the twist goes for the head – forcing one to rethink the story intellectually in light of its new context – this scene goes firmly, but understatedly, for the heart. Having been withdrawn and difficult with his single mother, Lynn (played by Toni Collette), Cole finally follows Malcolm’s advice and opens up to her about his secret. As they sit in a queue of traffic following a recent accident up ahead, Cole reveals the truth behind his quietness – that he is tormented by ghosts – something he has been too scared and ashamed to admit to her before.

Why it’s unheralded: To some extent justifiably, all the focus in THE SIXTH SENSE went on the final revelation and the audience’s reaction to their new understanding of what had gone before. A few short years after THE USUAL SUSPECTS, twist endings were something of a fashion statement and led to a massive desire among film-makers to ensure that every story ended with a big reveal. None came more of a cropper with this backloading of the story than Shyamalan himself, whose subsequent efforts to recapture this lightning-in-a-bottle yielded progressively diminishing returns (with an arguable exception in THE VILLAGE). He would have perhaps been far better off producing more stories with the emotional resonance of the Osment-Collette scene than trying to ape the structural bravado of the twist end every time.

Why it’s great: Certainly the actors add a huge amount to what is already a beautifully constructed scene, with both Collette and Osment delivering superbly judged, understated performances that quite rightly led to Oscar nominations for them both. But attention must really be drawn to the excellent dialogue: sparse, spare, but perfectly to-the-point, eschewing melodrama despite the fact that this is the most emotionally resonant moment in the entire narrative. The dialogue bursts with subtext, most notably about Lynn’s troubled relationship with her own mother, but also expresses to perfection the challenges faced by a child in opening up to a parent about a difficult and painful subject. The setting adds tension, from the snap of the flare in the opening shot to the conflict created by them being stuck in traffic, while the visual touch of seeing the dead cyclist at Cole’s window is just understated enough to ensure that the supernatural element remains firmly rooted in reality, as it has throughout the story. Overall, a masterclass not just in scene structure (look at how the scene divides into its constituent three acts, with rising conflict in the second half building to the eventual achievement of its protagonist, Cole’s, goal: to break down the emotional barriers he’s built up between himself and his mum) but in the effective handling of a powerful emotion release for his audience.