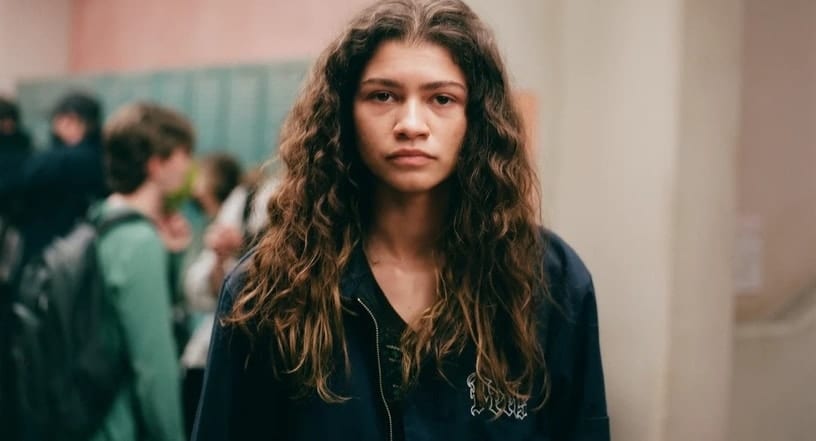 Welcome to Original Characters, an ongoing series of Industrial Scripts’ articles examining the most original characters to appear in both TV and film. This article will focus on Rue from Euphoria.

Most importantly, in screenplay terms, an original character is a character that shines through in spite of any other weaknesses.

They might be plucked from real life or an amalgamation of real people. Or they may just simply be a genius stroke of creativity. Either way, these are original characters…

The seventeenth in our original characters series will look at Rue from Euphoria.

Who is Rue From Euphoria?

Ruby “Rue” Bennett is a recovering drug addict and high school student from East Highland, California. Undoubtedly the central protagonist of Euphoria, Rue is introverted yet outwardly sarcastic, vulnerable yet resilient. And it’s these contradictory complexities that make Rue a compelling heroine.

Doctors suspected Rue had obsessive-compulsive disorder, attention deficit disorder, anxiety, and bipolar disorder as a child. These developed into endless anxiety attacks, concentration issues, and depression in her early childhood.

Her father was later hospitalized, and from then on, she continued taking his medication in secret. This habit only grew after her father’s passing. By the age of fourteen, drugs were Rue’s primary coping mechanism.

Rue is first introduced in the present returning home from rehab after narrowly surviving a drug overdose. She presents herself as agreeable and happy to be drug-free to her mother Leslie and her sister Gia. However, she immediately betrays them by admitting she has no intention of staying clean.

So Rue is a troubled and complicated character right from the off. She has a fascinating backstory and is a host of contradictions. It’s these elements that make her such a gripping and original character to lead the series. Her world feels authentic and her motivations are clearly linked to her backstory and context. Before the show has even truly begun, Rue is a character with endless three dimensions to turn to.

What Makes Rue From Euphoria an Original Character?

Whilst Rue is a fictional character, she is based somewhat on fact. Showrunner Sam Levinson has stated he drew inspiration from his experiences of anxiety, depression and addiction as an adolescent.

Levinson’s raw portrayal of Rue’s character breaks down stereotypes and misconceptions associated with depression, anxiety, and addiction. In the series, we understand the sources of these issues and viscerally experience the effects they have on one character and those around them.

This daring portrayal makes Rue genuinely original, relatable and memorable. Consequently, she becomes a reference point to many for difficult and profound experiences. And whilst her experiences may be extreme, they’re extrapolations of common teenage issues.

Rue’s character also speaks to a generation of teens raised in the time of omnipresent social media and a drug epidemic. In this way, she’s acutely affected by the issues of her time. And this breeds originality. She ends up as a poster girl for the Gen Z teen experience, albeit one at the sharp end of the spectrum.

Though self-destructive and reckless, Rue’s backstory and battle with her mental health and addictions make her likeable and understandable. With her profound context, Rue makes audiences care for her. This care may manifest as worry, excitement, distress, anger, sympathy or sadness. In the end, whatever her state, she is a character we deeply want to succeed against the odds.

Rue From Euphoria: A Multi-Dimensional Character

Multi-dimensional characters can drive the plot forward through their internal conflicts, personality, relationships, strengths, and weaknesses. These characters are layered and take time to break down and figure out.

Euphoria excels specifically at creating these multi-dimensional characters as they battle inner conflicts personal to them and their relationships. These characters’ responses and reactions seem genuine and realistic in the context of the teenage experience in particular.

Looking specifically at Rue, the weight of her inner conflicts builds tension between herself and the people in her life. Rue is immensely complicated. And this is seen clearly through her interactions with characters she feels close to.

In season one, the audience is privy to glimpses of Rue’s seemingly true inner feelings. This manifests through conversations with characters like Fezco, her mother and Ali Muhammad.

In season two, Rue’s addiction escalates to many near-death experiences and overdoses. The audience sees the depth of her addiction and the strain it puts on those around her. Her connections fray under the weight of her addiction.

Another aspect of Rue’s multidimensionality in Euphoria is her narration. Rue is the story’s narrator, but she is also a liar. As an addict, she tells lies, evident from as early as her introduction after leaving rehab.

“There are a couple of versions of what happened that night. It all depends on who you ask, and to be honest, I’m not always the most reliable narrator.”

Overall, Rue’s deception allows the audience to grasp the effects she, as a character and addict, has on the people she trusts. Just like Rue fools her sister, mother, and friends, she also fools the audience.

Her status as an unreliable narrator is another aspect of her originality, particularly within the context of teen drama. This feature plunges the audience into the world of an addict. It makes them palpably feel Rue’s effects on those around her.

The narrative and mise-en-scène are all linked to Rue’s imagination and fantasies. Therefore, the audience views the world through Rue’s skewed lens.

So peeking into Rue’s imagination in this way, without knowing whether the events occurring are real or not, only adds to Rue’s complexities. Furthermore, it also gives the audience a front-row seat to the side effects of a passionate, teenage crush.

As a whole, Rue’s experience is viscerally rendered by a dynamic portrayal of her inner conflict. The series thrusts the audience into Rue’s world tangibly by frequently using the cinematic techniques at its disposal. Her inner conflict isn’t just something we see from afar. Instead, we live and breathe it as the show unfolds.

Although she has an introverted personality, through Rue’s narration and dialogue, she seems to have a great sense of humour. This is filtered primarily through a sarcastic tone.

Rue has many people who care for her and her well-being; family, friends and acquaintances. But unfortunately, her addiction makes her a challenging person to care for consistently.

Jules Vaughn is Rue Bennett’s best friend turned first love and later unhealthy addiction. Whilst Rue struggles to navigate her world, Jules is the opposite; free-spirited and confident.

Rue and Jules first meet the night of Chris McKay’s party. Jules cutting her arm in response to Nate Jacobs’ taunts entices Rue to approach her.

Ultimately though, it is ironic how protective Rue is over Gia, as she cannot protect Gia from her own deceptions and manipulations. Rue, for example, lies to her sister and mother on multiple occasions. And the near breaking point for the family is Rue’s outburst in the opening scene of Season 2, Episode 5. Here, Gia and Leslie cower in fear behind a locked door as Rue kicks it down.

Lexi’s consistency in Rue’s life is a blessing. She’s a flash of stability in an unstable world. In this way, she demonstrates how a character such as Rue needs a character like Lexi to survive. She’s the somewhat unsung hero of support.

Fez is a compassionate drug dealer and high school dropout.

Fez seemingly helps protect Rue from herself. However, he’s a fascinating character because he both aids in Rue’s salvation and downfall, providing her with drugs but doing so disapprovingly. In the end, we can convincingly ask: is Fez a help or a hindrance?

Rue From Euphoria: A Reflection of Grief and Trauma

Ultimately, Rue is coming to terms with unresolved grief over the loss of her father. And this unresolved grief showcases itself via the many highs and near overdoses she faces. These often transport her into a memory or hallucination, for instance, where she encounters her father or feels his spirit.

Throughout the series, Rue Bennett is a character that is healing in a non-linear manner. In this way, her arc reflects the experience of battling addiction and mental health. After two seasons, Rue has taken small steps toward change. However, there’s always a chance of sliding back.

So Rue’s characterisation evocatively illustrates the experience of individuals struggling with addiction, mental health and trauma. Whether Rue stays sober or goes down another dark path, her journey is guaranteed to take audiences on a zigzag of emotions.

Moreover, the choice to deceive viewers through Rue’s unreliable first-person voice-over narration and perspective is effective in demonstrating the palpable effects of addiction on those around the person in question.

Overall, Rue from Euphoria is an original character shining a light on urgent issues faced by a section of young people in contemporary society. She’s a visceral depiction of struggle, grief and teen angst. Ultimately, her experiences might be extreme but they source from a deeply relatable well.

Enjoyed our article on Rue from Euphoria? Check out our other original characters pieces, such as Tony Soprano and Shiv Roy.

This article was written by Danielle Hassanali and edited by IS staff.