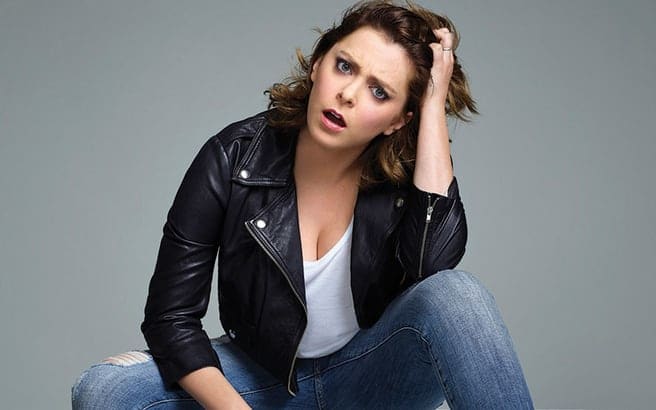 She began her career writing and starring in her own comedy music videos. This included Chanukah Honey, a Santa Baby parody inspired by her Jewish background.

Following her passions for musical theatre and comedy, it wasn’t long before Rachel Bloom’s career skyrocketed. Key to this was when prolific screenwriter and producer, Aline Brosh McKenna, discovered her music videos.

Eventually, the two of them teamed up to write Crazy Ex-Girlfriend.  In the acclaimed series, Bloom stars as Rebecca Bunch, a lawyer who impulsively follows her childhood love to West Covina, California in the hopes of finding happiness.

Throughout the series, Rachel Bloom addresses several taboo topics with sensitivity, yet at the same time, a generous dose of comedy. All done with intermittent musical numbers.

As a result of her performance in Crazy Ex-Girlfriend, Rachel Bloom won Best Actress in a Television Series Musical or Comedy at the Golden Globe Awards in 2016.

In addition to acting, Bloom’s talent for lyricism was reinforced when her song Antidepressants Are So Not A Big Deal won the Original Music and Lyrics category at the 2019 Emmy Awards. This accolade followed several previous Emmy nominations for a selection of the 100+ songs written for Crazy Ex-Girlfriend’.

Rachel Bloom’s comedic genius when it comes to screenwriting and songwriting is unparalleled. Moreover, her drive to challenge the status quo makes her a role model for all writers.

Anti-Depressants Are So Not A Big Deal - feat. Michael Hyatt - "Crazy Ex-Girlfriend"

1. “In every writers room ideas are shut down, but I think it’s important not to look at people dismissively or derisively when one of their ideas isn’t going to work in the script”.

2. “Write what you would want to watch and where you feel like there is a gap in storytelling, in experiences. Where you think, ‘Oh this is my experience, huh, I haven’t seen that yet, I’m gonna write that'”.

4. “I have learned to really get out of the mathematical side of myself that looks at story and story structure and go with, ‘Okay, well, what would people do in real life?‘”.

5. “I think that a lot of the time the story about a woman who’s manically in love is very much from a man’s point of view. The idea of her being comedic fodder or a monster“.

6. “There are some male comedians who are a little challenged and afraid of female comedians because comedy was how, in their minds, they get laid. So when the thing they’re trying to lay is suddenly funny, it f*cks with their power dynamic”.

7. “My own work was my way of reclaiming power and getting my confidence back, and so I learned that to me that is power, to me that is confidence, is my own writing and my own voice”.

8. “Doing musical comedy was my way to finally bring the humanity and vulnerability to the sketch comedy that I wanted to do. It’s very personal for me”.

9. “When I left the writing staff I began to get better as a writer outside of work […] in a way I want to thank these guys because they made me a better writer. My joke writing got 100% better from being in that room, and they made me feel horrible, and it’s pain that I used to my advantage to create these insecure, overcompensate-y, sad characters. So maybe I have them to thank for my career… I don’t”.

11. “Knocking love off it’s pedestal continues to be really fun, and not seeing it as something pure and holy and untouchable. Because that’s what we’re taught”.

12. “I think it makes people very uncomfortable when you take something that’s sexualised and then show the ugly side of it”.

13. “Women are sold this bill of goods. Not only will finding a man solve everything, that ‘happily ever after’ is getting married, but that love is noble. We’ve been taught to deify obsession in ways that I think are really, really dangerous, especially for teenagers”.

14. “Comedy exposes the dark underbelly about how we all feel”.

15. “I think we need to understand that we are all just people, and no one wants to be the villain, right? Even Donald Trump who acts like a cartoon, you don’t think he’s a villain. He has mental problems that are unsolved and probably will never be solved. I think if anything, this makes me want to go deeper into why people do what they do”.