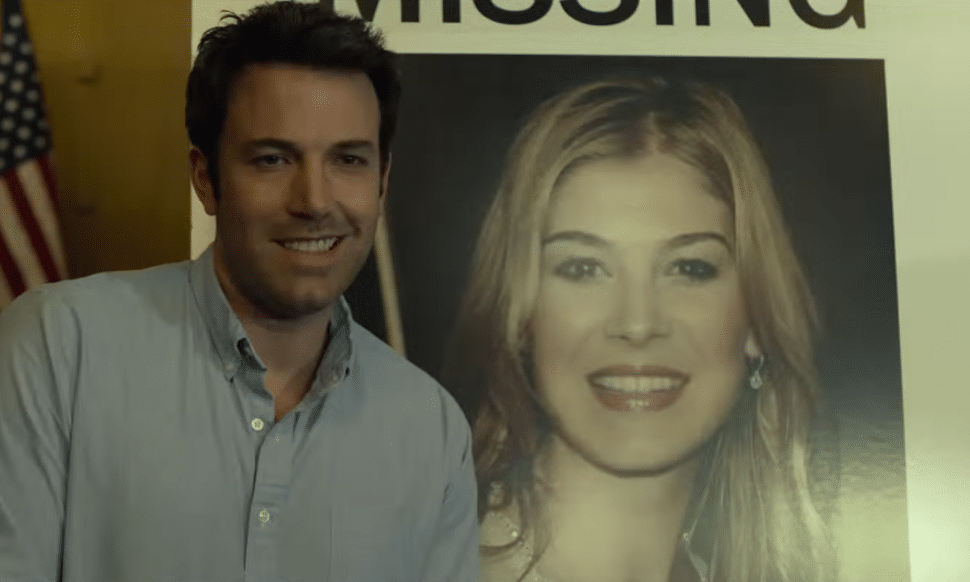 In our Genius Character Reveals series we examine scenes and moments where a film or TV show reveals a tremendous amount of character information in a compressed amount of screen time.

Gone Girl, a novel by Gillian Flynn, straddled the thriller and literary fiction genres. Ostensibly a murder mystery, it flips the script on the reader by changing point of view.

The film manages to do the same, despite book readers knowing what they were in for. Flynn wrote the script herself, bringing a few new surprises to the table.

GONE GIRL’s success led to a wave of films following in its wake, including THE GIRL ON THE TRAIN.

David Fincher, no stranger to big, twisty plots after SEVEN, THE GAME and FIGHT CLUB, went on to direct and executive produce the Netflix drama MINDHUNTER.

Who is Nick Dunne?

Nick Dunne is a writing teacher formerly based in New York City. He and his wife Amy (Rosamund Pike) lost their jobs in the recession and moved back to his home town in Missouri.

Their marriage crumbling, Nick started an affair with one of his students.

How is Nick Dunne’s character revealed by the action and dialogue?

GONE GIRL opens on a shot of Amy Dunne resting her head on a pillow. Her husband Nick Dunne runs his hand through her hair. In voice-over:

When I think of my wife, I always think of her head. I picture cracking her lovely skull, unspooling her brain, trying to get answers. The primal questions of a marriage: What are you thinking? How are you feeling? What have we done to each other?

Amy looks up in alarm.

At another time, Nick Dunne takes out the trash. His yard is mowed, but “all around him WILDERNESS encroaches.”

He looks ill. He stares at his house and works up the strength to go back in.

In different clothes, he walks past homeless men and meets his twin sister Margo (Carrie Coon) at a bar called ‘The Bar’. It’s packed with ’80s kitsch.

He gives her a present, a board game to go with her stack of board games.

Nick Dunne asks for a bourbon. She pesters him until he tells her what’s wrong:

What do we learn about Nick Dunne in this scene?

The violent act Nick Dunne describes in the opening voiceover immediately sets the audience on edge about his character. A seemingly pleasant domestic image is juxtaposed with thoughts of murder.

This raises one of the main themes of the story: can we ever really know what someone else is thinking?

The audience is given access to what Nick is thinking, but even this is potential misdirection.

Behind this violent act is actually a common frustration. Nick Dunne doesn’t want to crack open Amy’s skull to hurt her, per se, but to “get answers.”

“What have we done to each other?” suggests an exasperation with the relationship and a mutual attrition, grinding each other down gradually, rather than a sudden burst of violence.

The sequence that follows establishes Nick Dunne’s world. His well-kept surburban home feels like a prison, and yet it’s preferable to the wilderness on either side. (The homeless men serve as another visual reminder of this.)

The Bar, despite serving alcohol, is a place of arrested adolescence. The script describes it as:

packed with ‘80s kitsch: board games, toys, posters. Their very own CLUBHOUSE.

It makes sense that this is the space where Nick Dunne would go to get away from his wife. We don’t quite understand his marriage yet, but we understand something: it’s driving him to drink at 11 in the morning.

His exchange with his twin is also telling. This is, presumably, his closest relationship and yet it still revolves around his ego. He conflates his enjoyment of a board game with hers.

She guesses that Amy is the cause of his mood, but she has to drag the news out of him that it’s his anniversary. This is not something he likes to talk about.

Still, it’s becoming harder to reconcile this with the violence of his opening voiceover. Nick Dunne doesn’t seem like the kind of person to murder his wife, however unhappy their marriage.

Above all, he seems sad.

GONE GIRL is a thriller full of twists and turns, meaning it can’t waste any time setting up the characters and initial situation.

It subsequently uses a flashback structure to intersperse the murder investigation with Nick and Amy’s past, building up both of their characters.

For now, however, the audience have a clear portrait of Nick Dunne. He has many faults, including drinking in the morning of his five year anniversary rather than being with his wife, but he seems too ground down to do anything about it.

He’s more the type to let his marriage disintegrate silently, accepting that he’ll never really know who his wife is. When Amy disappears, however, this will be cast into doubt.

Even in this scene, there are hints of foreshadowing. Is Nick Dunne an alcoholic? Margo’s story about mistaking a stranger for her friend, which she starts just to fill time, foreshadows the false identities and plot twists later

It’s an economical but effective introduction that embodies the story’s themes perfectly. We think we know Nick Dunne, but we’re not sure. Is he actually capable of murder?