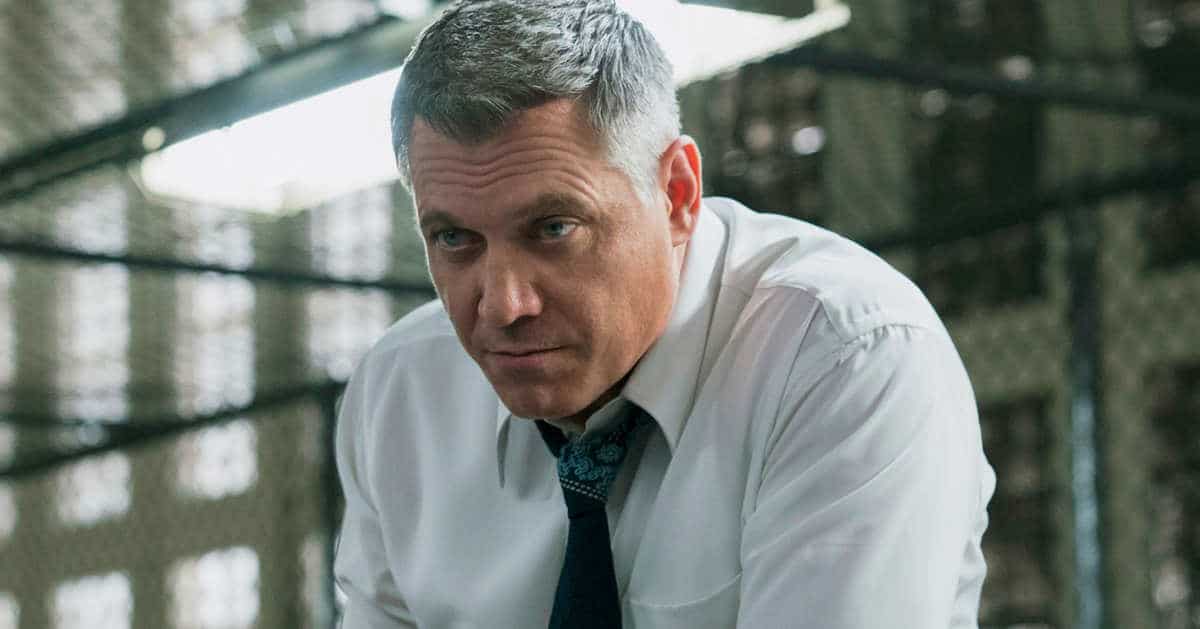 In our Genius Character Reveals series we examine scenes and moments where a film or TV show reveals a tremendous amount of character information in a compressed amount of screen time. This instalment focuses on FBI special agent Bill Tench (Holt McCallany) from MINDHUNTER.

MINDHUNTER is a crime drama based on the nonfiction book Mindhunter: Inside the FBI’s Elite Serial Crime Unit by John E. Douglas and Mark Olshaker, about Douglas’ career as a criminal profiler.

This first season covers the origins of modern criminal psychology, including the coining of the term “serial killer”.

David Fincher executive produces, and he also directed the first two and last two episodes. The show was created and this episode was written by Joe Penhall.

Who is Bill Tench?

Bill Tench is an special agent in the FBI’s Behavioral Science unit. However, his work isn’t understood or valued much by his superiors.

Towards the end of the first episode of MINDHUNTER, he meets the young Holden Ford (Jonathan Groff). Ford is a special agent who’s stuck teaching hostage negotiation but has bigger ideas of using psychology to profile murderers.

As with the other characters, the series only gradually reveals more about Bill Tench’s personal life, including a wife and troubled adopted son.

How is Bill Tench’s character revealed by the action and dialogue?

Holden Ford is in line at the cafeteria at Quantico, the FBI headquarters in Virginia. Bill Tench introduces himself, from Behavioral Science, having seen Ford get a drink with a professor, Peter Rathman.

Holden replies that he was a little disturbed by what he said.

Bill says, drily, “You were, huh,” and asks him to sit. He offers Holden a cigarette.

– Want to go outside?

– I don’t smoke when I don’t eat either.

Holden asks if Shepherd, their boss, talked to him.

He did his best. […] He can be pretty old school. I call this place “the country club,” because, you know, it can be a little starchy sometimes.

Bill then remarks that Holden went back to college, and asks his age.

A lot of guys your age don’t want to go back to school because they feel it undermines their authority. […] Most guys don’t want to get stuck doing recruitment. They’re busy working their way upwards.

Bill Tench describes Holden as a “blue flamer,” someone who’s very eager to do good.

Just take it slow. You’ll get there in the end.

Bill Tench then goes on to describe a program he started a few years ago, going on the road and teaching local law enforcement about FBI methods.

Holden asks if he’d need some help. Bill responds, “maybe we could help each other.”

What do we learn about Bill Tench in this scene?

Bill Tench, at a first glance, is the classic FBI agent. Square-jawed, flat-top haircut, and implacable. These all suggest another closed-off mind, another frustration for Holden Ford to face.

However, Tench dispels this as soon as he starts talking. His interviewing technique comes through in this scene, whether the character is conscious of it or not.

Bill Tench is highly observant, proactive and methodical, in his own no-nonsense way. Unlike the other characters who enter Holden’s orbit, Tench sought him out and not the other way around. He makes an empathetic connection with Holden, commiserating about the boss not understanding their work.

Then, he arrives at the pertinent questions quickly, to get the information he wants. He almost immediately starts psychoanalysing Holden, picking up on how his mind and motivations are different to others.

Bill Tench demonstrates an intellectual curiosity in this scene. He doesn’t completely shut himself off to new ideas.

How do we get ahead of crazy, if we don’t know how crazy thinks?

However, there are many small details here that reinforce that he’s of a different generation to Holden. Their exchange about smoking is one of the clearest. It’s still a default, a habit for Bill Tench. It’s also a symbol of his masculinity in a way, such that Holden is initially embarrassed to admit that he doesn’t smoke.

Bill Tench had a similar ambition as Holden, once. He saw a gap in law enforcement knowledge and used his initiative to fill that gap by creating the “road school.”

Now, though, he’s no longer as ambitious or perhaps as idealistic, as his advice to Holden to “take it slow” indicates. Bill Tench is several decades on, and the work load he has and the indifference he faces is getting to him. He’ll join in complaining about the boss and the bureaucracy, but he won’t rock the boat.

The age difference suggests a protective paternal, or mentor and mentee, type relationship between Tench and Ford. This subsequently becomes an important part of their dynamic.

However, at least in this scene, Bill disposes with that, insisting that they’ll be helping each other. Bill Tench sees them as equals, partners. This sense of fairness endears him to the audience, establishing him as a strong moral centre.

MINDHUNTER is not quite a procedural. The characters do solve mysterious crimes on the show, but it and they are far more interested with the psychology behind them. There are also plenty of obstacles facing them within the FBI. The lurid and the gruesome co-exist with the banal and the bureaucratic.

Holden Ford is a cold and distant character. He proves to be very easily drawn into the minds of the serial killers the team study. This is an advantage for the team, in that it helps them understand their subjects better, but a potential disadvantage for the writers of the show.

He’s not exactly a warm or inviting character to follow. Ford is more like the serial killers than he is the other characters.

By contrast, Bill Tench is a perfectly solid everyman, even though he too is an FBI agent. He forms a more human connection, translating Holden’s methods and insights for the other characters and for the audience.

This introductory scene shows Bill Tench already getting to the centre of who Holden is, what drives his unconventional approach, and what potential it holds. This unassuming meeting in a canteen, a typical office workplace environment, already feels like the start of something bigger.