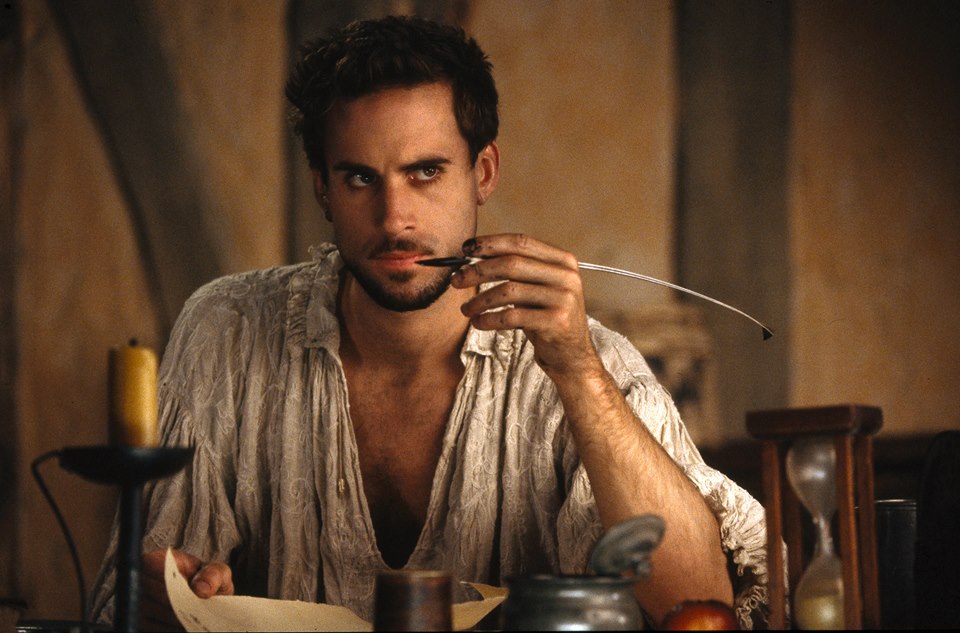 An odd trend in cinema surfaced in the 1990s and continued into the 2000s. A spate of teen films relocated the plots of William Shakespeare plays to high schools.

O updated Othello to make the main character a basketball player rather than a military general. 10 THINGS I HATE ABOUT YOU found a natural fit for The Taming of the Shrew in the teen dating scene. SHE’S THE MAN set the cross-dressing comedy of Twelfth Night within the gendered world of football (or soccer).

ROMEO + JULIET set the story of young star-crossed lovers in a Californian suburb. As with the 2000 film of HAMLET, it retained Shakespeare’s dialogue despite the modern-day setting.

Famous actors will also take time out of their movie star careers to appear on stage in Shakespeare plays, boosting their image as a serious performer. In terms of film adaptations, Al Pacino starred in THE MERCHANT OF VENICE, and Michael Fassbender took the lead role in MACBETH.

Shakespeare’s own life has inspired several films and TV shows, from the Oscar-winning SHAKESPEARE IN LOVE to punk-tinged series WILL and family comedy BILL.

Why does a playwright from over 400 years ago still have such relevance (and reverence)?

How has this one man racked up over 1,000 credits and counting to become the most adapted writer in cinema history? (And those are only the credited ones. Imagine if he was still around to collect royalties…)

Most importantly, how can Shakespeare be used to inspire and strengthen screenwriting for film and television today?

Shakespeare used familiar stories from history and mythology, drawing on archetypal stories and themes. The tragedy, for example, has its origins in ancient Greece. Roman and British history were also common source material.

He also made use of contemporary writers, for example Romeo and Juliet was adapted from a popular Italian story.

His plays touch on social issues that are still with us today, even if we have different perspectives on them now. One reason why Shakespeare plays are constantly being remade and staged in new productions is because it’s possible to tease out different themes and perspectives from the same text.

He pokes at gender roles and the follies of romantic love in his comedies, which feature characters cross-dressing and multiple cases of mistaken identity. The corrupting nature of power, and the extreme lengths people will go to for it, fuels many of his historical plays and tragedies.

He interrogates racism in Othello and Antisemitism in The Merchant of Venice. Othello, a tragic hero who other characters refer to as a ‘Moor’, finds himself undone by his own jealousy, stoked by his ensign Iago, over his white wife Desdemona.

Shylock in The Merchant of Venice is, conventionally, the antagonist of the story, a Jewish money-lender (one of the few professions open to him). However, he also has a soliloquy in which he forcefully makes the case for his own humanity:

If you prick us, do we not bleed?

If you tickle us, do we not laugh?

If you poison us, do we not die?

And if you wrong us, shall we not revenge?

Shakespeare’s plays still resonate today because they strike at the heart of what it means to be human.

It’s easy to overlook today, so far removed from when they were written, but Shakespeare also had a keen sense of what would appeal to his audiences.

Shakespeare had to consider both royalty and the ‘groundlings’, the commoners whose tickets only allowed them to stand. Many of Shakespeare’s historical plays were based on ancestors of the current queen Elizabeth I.

One common, and perhaps cynical, saying about film and TV is that “sex and violence sell.” Looking at Shakespeare’s plays, however, there’s plenty of both.

Titus Andronicus, for example, features incredibly gruesome blood and violence. Other plays of his employ incredibly bawdy humour and double entendres, which can go over the heads of modern audiences.

Even in his darkest plays, Shakespeare understood the need for comic relief. The Porter character in Macbeth, for example, describes the effect drink has on someone (boosting sexual desire but also leading to impotency):

Lechery, sir, it provokes and unprovokes.

It provokes the desire, but it takes away the performance.

Allegedly, after the plague hit London, Shakespeare concentrated on mostly writing comedies. Perhaps he understood that his audience would want a diversion from their surroundings. The speed with which plays were written and performed allowed them to react to changing audience tastes.

There are certain conflicts that are fundamental to humanity across time and culture. Often these are reduced down to:

The challenge is finding a context for these conflicts that will complicate them and make them interesting for a contemporary audience. This is what Shakespeare did. In turn, this is what filmmakers have done to Shakespeare in order to re-introduce him to new generations of audiences.

For example, Kurosawa’s film THRONE OF BLOOD situates Macbeth in feudal Japan. MEN OF RESPECT envisions Macbeth as a mafia movie. Both remain stories of a man against himself and against a society and the pressure it creates to garner power.

It’s possible to balance the universal with the specific, to give an audience something they’re familiar with but in a new way.

Also, it’s possible to tailor a story to multiple audiences who might be watching for different reasons. Writing psychologically rich, interesting characters leads to stories that can be seen from multiple perspectives. Thematic weight and more ‘superficial’ entertaining elements (like sex, violence and comedy) are not incompatible.

The current prestige TV recipe, for example, mixes sex, violence and a little black comedy with high drama, deep themes and complex characterisation. They appeal to both the committed, refined TV fan (or TV critic) and the casual viewer.

Walter White of BREAKING BAD is a tragic hero; the warring dynasties on GAME OF THRONES act out many of the dynamics seen in these plays.

Shakespeare would have approved. He might even have been writing for them.

1 thought on “OPINION: Lessons from Shakespeare For Screenwriters”