One of the world’s most popular screenwriting books, Blake Snyder’s Save the Cat has brought clarity and a sense of direction to thousands of screenwriters, many of whom were looking for the logical extension of Syd Field’s work.

If you’re not familiar with it, the book delivered a structural screenwriting roadmap: not quite a full-blown join-the-dots guidebook, but in some ways, close.

With fully 15 story beats to hit over 90-120 pages Save the Cat gave writers both a well-lit pathway through those dark narrative woods and a way to quickly filter out the stories worth developing to full screenplay stage.

But how well do the theories hold up?

In Blake’s 2nd book, Save the Cat Goes to The Movies, he attempted to firm up and solidify his thesis, by analyzing various classic films.

And whilst this analysis proved for the most part effective, the doubters (largely, let’s face it, from the independent-slash-art-house sector of the industry) remain…

So whilst Snyder’s greatest gift to screenwriters probably remains the pithy maxim “give me the same, just different”, here at Industrial Scripts we thought we’d really stress-test the theories, against a range of films of varying quality.

If you’d like to view all the articles in our Save the Cat Analysis Series please do so at the link, and simply read on for the next instalment in the series!

FILM:                          KNOCKED UP (2007)
STORY TYPE:            “Fool Triumphant” / “Rites of Passage”
NOTES:                      A much-lauded comedy, KNOCKED UP manages to avoid slipping into saccharine territory, while still persuading an audience to invest in its characters and its relationships, which is no mean feat. Ultimately the themes are the same as so many US comedies: male camaraderie, male fear of responsibility and growing up, and women’s responses to these ideas. As far as Snyder goes, this is for the most part his type of movie: clear Catalyst, and act break moments combine with a strong-ish Bad Guys Close In sequence, and a similarly successful Dark Night of the Soul section. The B Story is less than convincing – seemingly as ever – and the Debate and Theme Stated moments aren’t in keeping with Snyder’s views too, but overall this manages to conform to the paradigm while still managing to feel original and organic. Which probably explains its huge success, ultimately.

Save the Cat Analysis: KNOCKED UP

KNOCKED UP Opening image: a ramshackle Californian bungalow, with some beaten-up old vehicles outside. Whilst it’s arguable that the generic, “off into the sunset” finale contrasts somewhat with this down ‘n’ dirty opening, it’s not that convincing as opposites go. The boys’ play-fighting during the opening sequence certainly sets the tone for the movie, however.

– Like many Apatow movies, there’s no significant Theme Stated moment early on here, although the themes of the story do creep to the surface later on, most notably when Alison and Debbie discuss the nature of relationships. “I thought you were just meant to accept people for who they are and love them anyway”, says Alison, whereas Debbie’s view is: “you criticise them a lot so they get down on themselves and are forced to change…and in the end, they thank you for it”. Wish is true? In the end, the film seems to argue that both are, as Alison learns to accept Ben for who he is, and Pete appears to reign in his excesses (fantasy baseball league etc.) to please Debbie. The lack of a clear Theme Stated moment early on, however, means that the film fails to match the Snyder paradigm, at least in this respect.

– All the significant characters are introduced, and the Apatow is particularly keen to draw the distinction between the raucous, frat-boy chaos of Ben’s world and the adult, professional world inhabited by Alison, Debbie and Pete. “There is a sense in the Set-Up”, writes Snyder, “that a storm’s about to hit”, and what with Alison getting her promotion and going out to celebrate, and Ben appearing the same club, there’s certainly a strong sense of that… 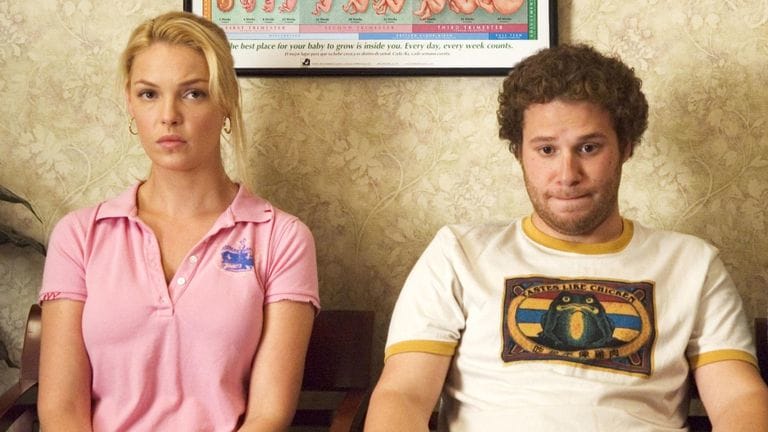 – 15 minutes in and Ben and Alison, having met in the club, go back to her place and have unprotected sex. A truly Snyderian Catalyst moment: big, story-changing and distinct.

– What will happen after the one night stand? Will Alison reject Ben? Will they see each other again? How will they both react when they learn she’s pregnant? Of course, there isn’t really an out-and-out Debate going on here because neither of them know yet that Alison’s pregnant, but we do, and there’s a very strong sense of “what’s going to happen next?” here, which does feel Snyderian. Still, the Debate section remains one of Snyder’s least supported story sections by the films we’ve encountered.

– Precisely 25 minutes in and Alison learns that she’s pregnant. It’s not strictly speaking a pro-active decision on the part of the protagonist, as Snyder would prefer, but in all other ways this is about as clear a Break Into Act Two beat as one could hope for.

– Alison and Ben go out for dinner, and as this is their first really sober conversation, you could describe this as the start of the love story. However on the flip side there isn’t any significant mention of the theme of the movie here, and nor are there any new characters to provide Snyder’s beloved “booster rocket” effect. Overall then, this is another B Story which fails to build up any significant momentum, and overall this story beat remains one of Snyder’s least convincing.

– The promise of the premise time. Looking at the poster for this movie, it’s obvious that at its core this is a fish out of water tale, about a man floundering around in an area of life he’s nowhere near equipped for. We’ve come to see a slacker saddled with huge responsibilities, and we want to laugh while we see how he responds to these responsibilities. “I think that’s it’s awesome that you’re going to be a father, man”, Jay tells Seth, “think of it like this – it’s just an excuse to play with all your old toys again”. But the early stages of this sequence actually feel like a Debate section, as Ben and Alison try to decide what to do. Jonah tells Ben he should get an abortion, Alison’s mother tells her the same thing. So this early sequence isn’t exactly full of Snyder’s spirit of “Fun and Games”, but it picks up soon afterwards, as we see Alison meeting all Ben’s crazy friends and then there’s a montage sequence of the protagonist truly out of his element: meeting gynaecologists. So overall, this sequence certainly contains moments of Snyderian value, but it’s not the most convincing Fun and Games section we’ve encountered.

– 68 minutes in, and Ben and Alison encounter problems in the bedroom. This is about as close as we get to a distinct Midpoint section here, and this is a clear “down” moment, as the problems in the bedroom and the subsequent earthquake (during which Alison seems to realise for the first time that Ben is pretty awful father material), signal the start of the Bad Guys Closing In section…

– As above. Alison: a) shuns sex with Ben due to his hang-ups about what position they do it in; b) realises he isn’t beside her during the earthquake, and is instead smoking a bong; c) learns that he hasn’t been reading the baby books he said he would; and d) is essentially a man-child, with his samurai swords and other “toys” lying around his bedroom. The Bad Guys also close in elsewhere: Debbie is convinced Pete is cheating on her, and ropes in Alison and Ben to investigate. This indirectly results in an argument between Alison and Ben, who share different opinions on the Debbie/Pete troubles.

– 80 minutes in, and Alison and Ben have a blazing row at the gynaecologist’s, and Ben storms out. It looks over for them. This lacks Snyder’s favoured “whiff of death” moment, and it’s also arguable that the break-up isn’t definitive enough here, to merit the All is Lost tag. But it’s as good as we’re going to get in this particular section of the film.

– This is actually a very upbeat sequence to begin with, as both Debbie and Alison and Ben and Pete set out to let rip within the confines of their own respective genders. However things turn sour quickly: Debbie and Alison can’t jump the line at their favourite nightclub for being “old and pregnant”; and Ben and Pete take mushrooms and their elation swiftly turns to paranoia and self-doubt. Both Debbie and Pete worry individually about their futures, and it’s interesting to note that their relationship is never really resolved in the film – we’re not sure whether they’re going to end up with each other or not. There is certainly an element of that “oh Lord, why hast thou forsaken me?” feeling that Snyder champions here, with Debbie and Alison slumped on the curb of the street, and everyone being emotional. The sequence then gets darker as Alison rejects Ben, but overall a comedy like KNOCKED UP is never likely to match the Snyder paradigm very well in these “darker” areas of the story.

– Clear act break here as Alison is alone, with the baby on its way, and Ben has the chance to play the hero and save her, which he does, even displaying how he’s changed in the process (having read the baby books). A very Snyderian moment.

– A very Snyderian Finale as all’s well that end’s well, with Ben calming the situation between Alison and the deranged doctor, and Alison giving birth to a healthy baby girl. The Finale is where “the lessons learned are applied” says Snyder, and this does feel apt for this sequence, with Ben proving a calming influence throughout, and winning the girl as a result.

– As suggested, not an opposite to the opening image, but as Ben insists on driving slowly and sensibly for the baby’s sake we’re given further evidence of how he’s changed and matured over the course of the film.