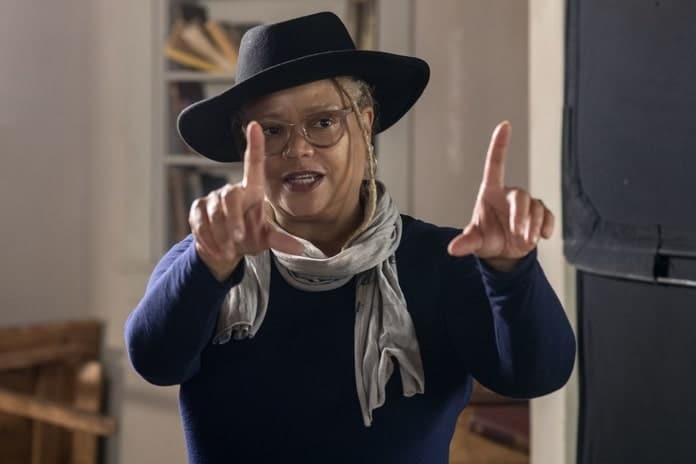 Kasi Lemmons is an award-winning and nationally-acclaimed actress, writer, director and filmmaker. Landing her first professional acting job at just 9 years old, Lemmons would go on to attend NYU’s Tisch School of the Arts, UCLA and The New School’s film program.

In 1983, she crashed an equity audition for a Steppenwolf production of Balm in Gilead, directed by John Malkovich, and received the role of a “drug-crazed, violent lesbian.” She gives this experience credit for designating her as an ‘80s cult actress and forever changing her perspective on acting.

Following her theatre work, Lemmons acted in several crime-drama series, such as:

Next, she hit the big screen with roles in films like:

Contrary to Lemmons’ acting success, she felt that something was missing from her work. “I started to feel like I was running a fever and that there were things that I needed to express,” she said, “and that if I didn’t, then it would somehow sicken me, that I was going to suffer from not expressing myself fully.”

Not long after, Samuel L. Jackson personally asked Lemmons to direct the 2000 film adaptation of The Caveman’s Valentine, which would become her sophomore directing project. When Lemmons was asked in 2007 to rewrite the script for Talk to Me (Starring Don Cheadle, Chiwetel Ejiofor and Taraji Henson), she fell in love with the film, pitched herself to be the director and succeeded.

Lemmons would later reunite with theatre as the director of the 2013 film adaptation of Black Nativity (Starring Forest Whitaker, Jennifer Hudson and Angela Bassett).

Later that year, Lemmons would begin directing two out of the four-episode miniseries Self Made: Inspired by the Life of Madam C. J. Walker (starring Octavia Spencer and Tiffany Haddish), which premiered on Netflix in late March of 2020.

Kasi Lemmons’ career in the film industry is flooded with pure artistry and genius, which have propelled her through decades of notable filmmaking. Because of this, we’ve compiled 15 of her most useful and inspiring quotes about writing, filmmaking, and life.

Kasi Lemmons Quotes on… having the right mindset:

1.“There is confidence in focus, and that is hard. If you think about yourself in the process, it gets in the way of the creativity…I found complete ease in that I was not self-conscious.”

2. “I’m very optimistic, like most people that are in film. We are ridiculously optimistic people. Half my day is incredibly grounded and the other half my head is in the clouds because I’m always imagining things.

4. “In writing, I never look at it as a mistake, I look at it and say “well that was an interesting experiment.”

5. “The vibe on a movie comes from the top down, so I try to create a very safe environment and a kind of upbeat world: ‘We’re in this together; we’re doing this together.’”

…getting in touch with your characters’ backgrounds:

6. “History, especially in certain places, is not a dead thing. It is a wonderful, almost holy experience.”

7. “Find out who the [subject of the movie] loved. Because who the person loved is the story, to me. It’s what they did, but it can’t just be a catalog of what they did. When you find the character’s passions and who they loved and trusted, and didn’t trust, that’s where you find the real story.”

8. “[For Harriet], the first thing I did was research… I did seven months of research and I read everything: every biography, every academic paper, and everything on the underground railroad. I really tried to find what was her story.

9. “We have to have the courage and the strength and the force of will and the belief and the optimism, frankly, to fight for the future.”

10. It’s important that you keep your dream alive, because you’re going to encounter a lot of obstacles, and no one is going to dream big for you. You have to have the fortitude and the resilience to stick with your own dreams. That can be hard.

11. I’m never not trying to get a movie made. I’m always in some process of writing a script, or working on some development of something that I’m hoping to turn into a directing gig. I spend all my time trying to push projects uphill.

12. “We have to learn, as writers, that our story remains our story, so that we are not afraid to make changes.”

13. “It’s not necessarily always the words coming out of somebody’s mouth, or even what they’ve written on paper and handed to you. I don’t take notes literally as much as I take them emotionally: ‘What am I hearing that’s stopping and making them uncomfortable?  How can I address that in a way that makes my own voice stronger?’”

And finally on…falling in love with your work:

15. “It’s like the moment you realize you’re in love. You can be next to somebody or work with somebody and you think you’re friends, and then one day you can’t breathe. That happens to me with projects — all of a sudden I can’t stop thinking about it, or I’m thinking about it in my sleep, or I wake up thinking about it. That’s how I can tell…It has to feel like love.”

This article was written by Brenna Sheets and edited by IS Staff.