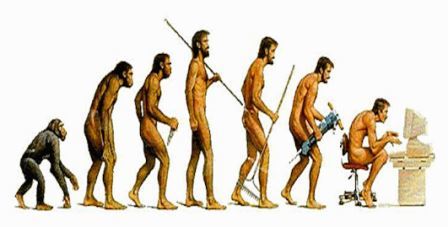 This article will focus on how best you can start your career in script development.

One of the questions we’re asked most at Industrial Scripts is, “how do I build a career in script development?”

It’s not an exact science by any means, but the key to getting ahead in script development is to pay your dues.

Where Do I Start?

As we have already touched upon, starting a career in script development may seem daunting. You may be asking yourself, where do I begin? I don’t know anyone in the industry who can help me? What do I do?

There is no clear-cut answer. However, there are a couple of things you can do to kickstart this process.

The blunt truth is that Ridley Scott is not going to hire you as his Head of Development without you working as a Development Executive first.

To beat the legions of others to a Development Executive position, of course, you’ll have to first prove yourself as a Development Assistant or industry Script Reader. This means reading for big, reputable companies.

To get these jobs you’ll have to impress the powers-that-be somehow. This is usually either through your work as a runner or as a script reader for small companies/for free.

It is crucial at this early stage in your script development career to get your name out there.

First off, it may be one of the least appealing options, but you can offer to read scripts for free – i.e. become a script reader. Usually, you’d contact a large, reputable company and offer to work for free and read scripts for them. Understandably, this may seem like an unfeasible option, especially with regards to finances.

However, the benefits of this could be endless and worth it. It is quite possible that after doing some unpaid work as script editor, and you have shown your skillset and dedication to the role, you may be offered a paying position to stay on and work for the company.

We would advise checking online screenwriting companies as well as contacting and visiting companies directly. It is best to widen your options and possibilities.

Additionally, perhaps after gaining a BA or MA Degree, you may feel like you have enough experience to go straight ahead and become a freelance script reader. Inevitably, it is important that you have had some experience as a script reader, as companies will want to see your dedication and knowledge before agreeing to take you on board.

At the end of the day, anyone can read a script. You must be skilled and have the eye to spot a good script from a bad one and offer some helpful and insightful feedback.

Key Elements A Script Reader Needs To Be Able To Do:

If you are serious about going into this type of career, you must be obsessed with reading. Reading must be your passion because you will be doing this 24/7.

Likewise, you also must be keeping in with recent television programmes, films and documentaries. You need to have a strong awareness of the world around you and what is going on in the Arts industry.

You also need to have a clear understanding and well-developed knowledge of narrative and structure.

Later on in your career, you’ll have established a reputation within development circles and got some big company names on your CV. This is an aspect the role of Script Reader can help you with significantly. Despite being an unpaid role, it enables you to meet industry professionals and make key contacts who may help you down the line.

Once you have these big company names on your CV, it is more likely that you’ll begin to be considered for the occasional, rarely advertised full-time development job.

You might move up through the ranks, spending around 3 years in a script development position before moving to a new one.

From here, it is going into producing, or even starting your own independent script feedback service. That is, only if you’ve accumulated the years of necessary credentials by this point to have your service taken seriously.

Are There Any Alternatives?

Alternatively, and perhaps more ambitiously, you could always ‘do it yourself’ and start a script reading business. This is tricky and will have a financial impact. However, it is a great way to assure that you will ‘get your foot of the ground’ and make an impact on your career journey.

However, one thing to bare in mind with this option is the importance of experience and expertise. It is all very well you may have a degree in screenwriting/filmmaking, but what gives you the status and ability to judge others work? It is important that you perhaps seek experienced people to join your team to add a sense of value and worth to the company.

You could also apply to go on a scriptwriting or script reading course. This will help develop your awareness and knowledge of screenwriting. It will enable you to develop a good eye and will help prepare you for developing your career path towards work in this area of the industry.

Here’s how the full-time jobs in script development generally break down:

(note: Script Development Co-ordinator is a rare job, with many companies lacking the need or resources to hire at this stage)

Here’s our handy visual guide to how a script development professional’s career evolves, and the kind of timeframes at each stage.

Remember, a serious career in script development is a marathon not a sprint. There aren’t any short-cuts or clear cut routes you just have to do the hard work if you’re serious about it! 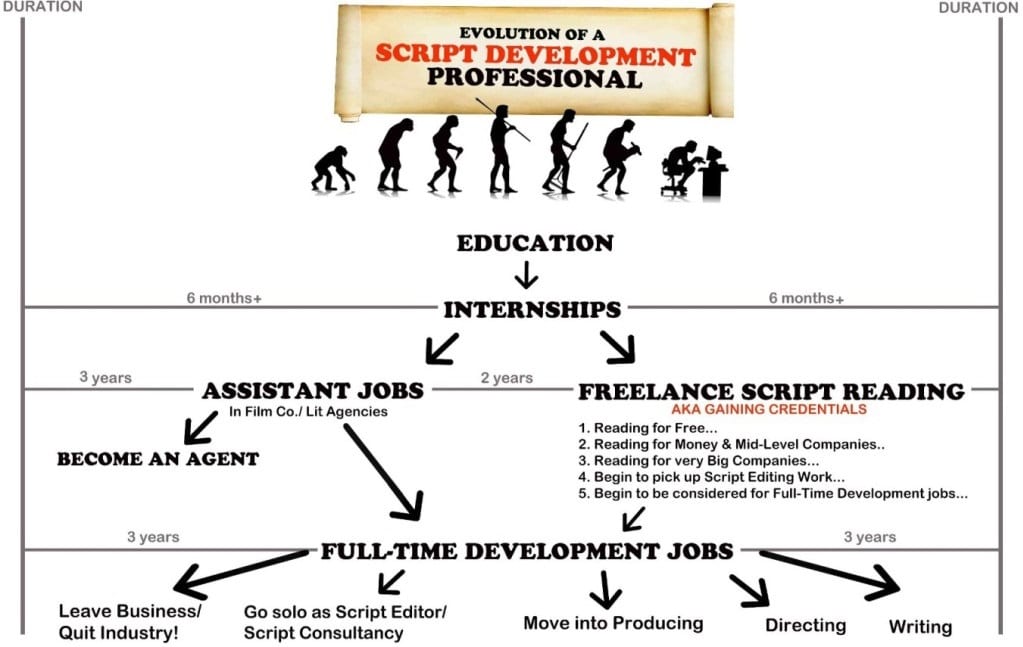 As you can see from the diagram above, getting into this industry doesn’t happen overnight. You need to work your way up and undergo a career journey.

It is important after education, that you gain work experience or undergo an internship. This may not be the case with every individual, however internships are becoming extremely popular and the ‘done thing’ to do to guarantee gaining jobs as assistants or to help kick-start your career as a freelance script reader.

Below we will delve into the various career paths you may want to go into.

One of the career paths you may be aspiring to go into is becoming a script editor.

Typically, you would have started either as freelance (or unpaid) script reader for a company. After fulfilling this role for sometime, you would progress into becoming a Script Editor.

There are different levels of script editors.

What is a Script Editor?

“In order to realise the full potential of a screenplay, the Screenwriter and the Producers have to reach compromises that fulfill both the creative and commercial needs of the two parties. Script Editors are the individuals who mediate this process”

But what is their job?

They also organise the development and editorial meetings and feedback sessions.

The script editor is present through the entire development process. They are in constant communication with the screenwriters and serve to emphasise the requirements with regards to the production and market.

The role also means they must oversee the development of the screenplay, ensuring the story is carefully mapped out and the writer is sticking to it.

As it sounds – the main part of the script editor’s job is to edit scripts. However, depending on how senior your role is, it will consist of other jobs as well (as mentioned above).

Another path you may choose to go into is producing.

What is a Producer?

“Producers usually head up the business side of the TV or film production. They have numerous responsibilities which can include anything from the creation and brainstorming of programme ideas to the marketing of the show.”

What are some elements of the job?

What are some skills required?

Another path you may choose to go down is that of directing.

What is a Director:

“The Director is the most important person in the production team. Even with the best actors and actresses, and most highly trained crew members, the entire production can fall apart if the Director does not play their part”.

Film Directors need to work across the board with all types of departments of production to create they creative vision.

Despite producers being responsible for hiring the cast and crew, the director has the final say on who is cast and hired (working closely with the casting director and producer).

Additionally, the director works with the editors to ensure their creative vision is conveyed.

The director also decided on how the film is advertised and who with.

What skills are required to be a Director?

There are also assistant director roles:

The final career path we will discuss is that of the writer.

What is a Screenwriter:

“Every film or TV show needs a script, not only for the actors to read and memorise their lines, but for the whole production to have a reference and a complete picture of the story which is being represented. It’s the Screenwriter’s job to develop the story and write the script”.

What is the job?

Screenwriters are the creatives, they come up with the concept for a script and create a rough plot. They undertake a lot of research and develop characters, the story and narrative structure. They need to make the idea extremely compelling and believable.

Screenwriters tend to work freelance, but usually have a producer or director they frequently work closely with. If they are extremely popular, they may be asked to work on a product directly by a producer.

“Especially at an initial stage, once they finish working on a script, Screenwriters need to pitch their work to producers or agents, in order to “sell” their idea and see their project go into production, after making the necessary changes following the instructions of the producer”.

We hope this article has helped you gain a more in-depth knowledge and awareness of the evolution of a script development career, as well as the several different job-types you may want to go into further down the line.

If you enjoyed this article, why not check out our article: In Screenwriting, Hope Springs Eternal?

2 thoughts on “The Evolution of a Script Development Career”