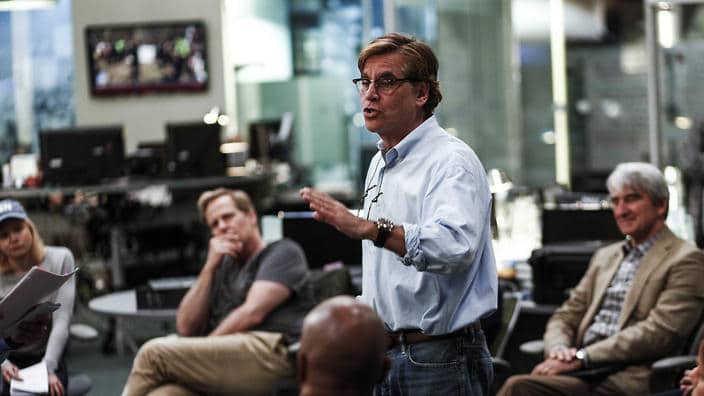 Where do you start with Aaron Sorkin? His screenplays are the best way to get to know why he is so revered as a screenwriter. However, we’ve compiled some Aaron Sorkin quotes that provide insight into why he’s not just a popular screenwriter but a voice of wisdom for aspiring writers.

The man behind The West Wing, The Social Network and The Trial of the Chicago 7 is held up as one of the greatest screenwriters of all time. His quotes give an insight into his process but also into why he’s such a widely admired figure in the screenwriting world.

From Stage to Big Screen to Small Screen

Aaron Sorkin originally started in the industry as an actor before becoming a screenwriter. In the 1980’s he worked many different jobs (from chauffeuring to delivering singing telegrams) whilst trying to make it as an actor.

However, soon enough he realised that acting wasn’t his strong suit and found a new love in the typewriter. He began writing plays, one of which, Hidden in This Picture was performed off-off-Broadway. But it was his play, A Few Good Men, that started garnering him some serious attention.

The play had been having readings in New York when Jaws producer, David Brown, came across it and purchased the film rights for over six figures before it had even premiered on stage. The film was a huge success and launched Sorkin to screenwriting fame, grossing over $243 million at the box office worldwide.

It was A Few Good Men that led to Sorkin striking a deal with Castle Rock Entertainment. However, proving that the screenwriting journey isn’t always an easy upward trajectory, it would be a number of years before Sorkin completed his next screenplay, The American President.

Some script doctor work on films such as The Rock and Enemy of the State would follow but it would be The American President that provided the most obvious precedent to Sorkin’s biggest hit, The West Wing.

Sorkin originally pitched the idea for The West Wing from leftover ideas from The American President, garnered from his visits to the White House during research. After a year of pitching the idea, NBC eventually greenlit it and catapulted the series straight into the annals of television history, with its debut season winning nine Emmys.

Overall, Sorkin wrote 87 episodes of The West Wing in its first four seasons, before departing over conflicts with Warner Bros.

Talking His Way to the Top – Why is Aaron Sorkin So Good?

Sorkin’s most well-known attribute is his dialogue. It’s witty, fast-paced and often takes place on the move. This is the fundamental characteristic of all his screenplays. However, it’s not just the style of the dialogue that is so appealing but the way it’s structured.

The walk and talk dialogue technique is often talked about as a hallmark of Sorkin’s screenplays. And this demonstrates how his dialogue is dynamic and not just wordy. It always takes place amidst context, movement and pursuit of the narrative. It’s not talking for talking’s sake, it’s a way of moving the plot forward in an entertaining and dynamic way.

This isn’t for everyone and the way that dialogue makes up such a big part of Sorkin’s screenplays goes against that famed piece of screenwriting advice, ‘show don’t tell‘. However, it’s the skill of Sorkin’s dialogue that makes it work as well as the context in which it’s deployed. It may be wordy but it’s still considerate and deliberate, often down to the smallest linguistic details.

Since The West Wing, Aaron Sorkin went into TV again with Studio 60 on the Sunset Strip and The Newsroom. But it’s primarily his film work that has got him the most praise and plaudits. The peak of this was arguably The Social Network, a brilliantly entertaining, dynamic and penetrating script matched by David Fincher’s dynamic direction.

Screenplays for Moneyball and Steve Jobs came just before he moved into directing as well as writing. Sorkin is both the writer and director on Molly’s Game, The Trial of the Chicago 7 and Being the Ricardos, proving that his knack for great storytelling lies behind the camera and not just behind the typewriter.

The Aaron Sorkin quotes we’ve compiled demonstrate the wit and wisdom behind this prolific and unique screenwriter. They provide inspiration for all writers out there, showing that the road isn’t always straight and easy.

For more on his writing tips, check out our review of the Aaron Sorkin Masterclass. But now, let’s dive into some of his great quotes.

1. “Any time you get two people in a room who disagree about anything, the time of day, there is a scene to be written. That’s what I look for.”

2. “First scenes are super important to me. I’ll spend months and months pacing and climbing the walls trying to come up with the first scene. I drive for hours on the freeway.”

3. “I’m very physical. When I’m writing, I’m playing all the parts; I’m saying the lines out loud, and if I get excited about something – which doesn’t happen very often when I’m writing, but it’s the greatest feeling when it does – I’ll be out of the chair and walking around, and if I’m at home, I’ll find myself two blocks from my house.”

4. “I love writing but hate starting. The page is awfully white, and it says, ‘You may have fooled some of the people some of the time, but those days are over, giftless. I’m not your agent, and I’m not your mommy; I’m a white piece of paper. You wanna dance with me?’ and I really, really don’t. I’ll go peaceable-like.”

5. “I’ve never written anything that I haven’t wanted to write again. I want to, and still am, writing A Few Good Men again. I didn’t know what I was doing then, and I’m still trying to get it right. I’d write The Social Network again if they would let me, I’d write Moneyball again. I would write The West Wing again.”

6. “When I create a TV show, it’s so that I can write it. I’m not an empire builder; my writing staff is usually a combination of two kinds of people – experts in the world the show is set in, and young writers who will not be unhappy if they’re not writing scripts.”

8. “There have been times – and not just on The Newsroom, but on The West Wing, Sports Night, Studio 60… where it was hard to look the cast and crew in the eye, when I put a script on the table that I knew just wasn’t good enough.”

9. “If I am writing a movie and I am stuck, I can call the studio and tell them it’s delayed. You can’t do that with television – you have air dates to meet.”

10. “I tend to write very idealistically and very romantically…I have a very bad time with bad guys. Almost as soon as I write one, I start writing them to become a good guy. What happens is I really like the actor and I want them to be part of the gang. It’s a terrible habit….I’m crazy about Breaking Bad, but I wouldn’t know how to write an episode of it.”

11. “I’m more comfortable writing traditional protagonists. But Steve Jobs and The Social Network have antiheroes. I like to write antiheroes as if they’re making their case to God about why they should be allowed into heaven. I have to find something in that character that is like me and write to that.”

12. “I tend to write characters who are hyper-communicative. I really admire writers like David Mamet, Sam Shepard, and Harold Pinter, who are able to make absolute poetry out of characters who have difficulty communicating, who are hardly ever saying what they mean; it’s a fantastic thing to watch and a fantastic thing to listen to. It’s not something I’ve ever been able to do. My characters tend to use ten words when one would’ve sufficed. They say exactly what they mean in all different kinds of ways, and I try to make it fun.”

13. “I grew up believing, and continue to believe, that I am a screw-up, that growing up with my family and friends, I had nothing to offer in any conversation. But when I started writing, suddenly there was something that I brought to the party that was at a high-enough level.”

14. “A song in a musical works best when a character has to sing – when words won’t do the trick anymore. The same idea applies to a long speech in a play or a movie or on television. You want to force the character out of a conversational pattern.”

15. “I wouldn’t want to give the impression that I’ve mastered anything, but there are a couple of things I know now that maybe I didn’t know when I was starting. To begin with, I worship at the altar of intention and obstacle. Somebody wants something, and something is standing in their way of getting it. They want the money, they want the girl, they want to get to Philadelphia. Then the obstacle to that has to be formidable, and the tactics they use to overcome that obstacle are what shows us the character.”

16. “The properties of people and the properties of character have almost nothing to do with each other. They really don’t. I know it seems like they do because we look alike, but people don’t speak in dialogue. Their lives don’t unfold in a series of scenes that form a narrative arc.”

17. “You start with a feeling about an interesting workplace, whether it’s a cable newsroom or the White House. Getting that feeling, that idea, from your head to the page to the screen is like trying to walk from here to there with water in your hands. By the time you get to there, there’s not going to be much water left. But every once in a while, if you collaborate with great people, not only do you get from here to there with a lot of that water left, it turns into champagne by the time you’ve done it.”

18. “There are some screw-ups headed your way. I wish I could tell you that there was a trick to avoiding the screw-ups… but they’re coming for ya. It’s a combination of life being unpredictable, and you being super dumb.”

19. “Good writers borrow from other writers. Great writers steal from them outright.”

Enjoyed our list of Aaron Sorkin quotes? Why not have a look at our other quotes articles, such as Nora Ephron and Guillermo del Toro.