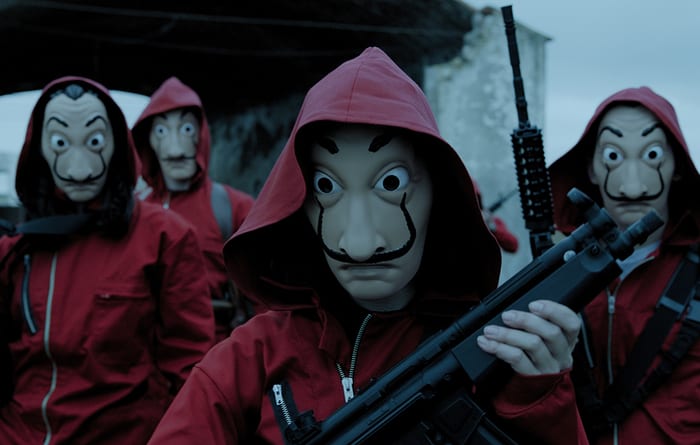 How to Write a Heist Movie (or TV series): The ULTIMATE 10 Steps

A band of misfits. A slick elite group. “Getting away clean”. Whatever the stakes. A heist movie can provide writers with an instant shortcut to tension, drama and great action scenes.

It’s a staple of the thriller genre. The heist movie has been there since the dawn of cinema and continues to reinvent itself.

There are many different ways the heist movie can manifest. It’s not always just a simple case of robbing a bank. A group banded together to steal something without getting caught. This is the essential core of any heist movie, whatever the context.

Moreover, the global smash hit Money Heist shows the movies don’t have a monopoly on the heist narrative. Perhaps the door has been opened to a new genre of heist TV series.

We’re going to take a look at the 10 key steps in how to write a heist movie. What are the vital beats and tropes to follow? How have these been subverted?

Of course there are exceptions to the rules and heist narratives that subvert tropes. But there is almost always a basic format in place. The format of how to write a heist movie is also helpful for laying out a thriller structure in general.

So let’s get started. Let’s meet our merry band of thieves…

1. The Setup and the Mastermind 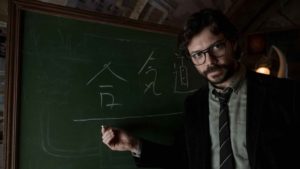 Who is the brains behind this operation? And where are they coming from? There will always be a leader. Someone with a plan, a vision to execute and change the lives of those willing to participate.

Now the mastermind is not necessarily always also the protagonist.

It’s important to show us what makes this mastermind tick. What is their life like and what has lead them to this point?

It’s most important to get a sense of how the mastermind’s backstory makes them uniquely placed to lead this heist. 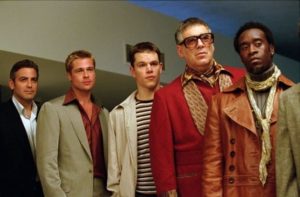 Who makes up our band of heroes? What do each add to the overall team?

In Money Heist, Ocean’s Eleven and Inception, the team is specifically assembled with each character’s unique talents and abilities. They’ll be a computer whizz who can hack into anything, a master of engineering who can unlock any safe, or a hardened soldier ready to fight anyone or anything.

In Dog Day Afternoon and Hustlers, the teams are more organically assembled.

What’s important to remember in the team is that each character must add something to the ensemble. This is why heist teams often prove opportunities for great casting.

Each role has flair and a distinct place to take in the movie. Think of the A-listers in Ocean’s Eleven and Inception or the memorable verve of each member in Money Heist.

Hustlers perhaps best proves the importance of each team member being different from the other.

This is one of the most fun steps in how to write a heist movie. Inventing your charismatic heroes. And making sure each one has a distinct and unique flavour to add to the overall dish.

3. The Motivation & The Reason We’re on Their Side

Why are they doing this? What is the mastermind’s great motivation? And why do the team members follow?

Motivations can range from to theoretical to personal to the simple motivation of needing money. Often the best heist movies will have a motivation that is a mix of all of the above.

It’s hard to make any motivation without it being at least a little personal. This speaks to key part of creating any motivation: We need a reason to emphasise with what is essentially a group of criminals.

What is behind these character’s desperate attempt to subvert the law?

The characters in Hustlers are plunged into economic precarity when the 2008 financial crisis dries up their income.

So the characters have a motivation. But what is the unique context of this forthcoming plan?

What is the key ingredient that separates your heist movie from all the others. What is the core central idea that makes your story stand out?

All these stories have a big, ambitious premise. One that is likely to grab headlines both in and outside the movie.

What do these stories have to say about contemporary society? Or what unique setting and context do they have to wow audiences (the ambition of robbing three Las Vegas casinos/the concept of dream stealing)?

By now the heist movie is a well-worn genre. How does your take on the genre stand out and what is the big idea behind it? This is crucial to the viability of your idea and script.

What is the plan for this outrageous heist? And how are they going to pull it off. Not only do the team need this explanation but the audience need it too.

It’s hard to think of any heist movie or narrative without a scene or sequence where the plan is laid out in front of the team.

It’s a familiar scene to audiences. And so it’s worth thinking of how to put a twist on it.

In Money Heist, for example, the setup is spun out for the entirety of the series.

After the formality of the plan is laid out and then carried out, we need an element of unpredictability to veer us off course.

A member of the group or an enemy that is a loose canon will add a flavour of unpredictability and tension to proceedings. This could also be an unplanned element to the proceedings, one we’re never quite sure which way will turn.

Or in a totally different way, Berlin and Palermo in Money Heist.

In Hustlers, the addition of Dawn to the gang proves a turning point.

The stakes are high in a heist whatever the context. We don’t want to see our heroes get caught. And so an unpredictable element will heighten the fear of everything going wrong.

No matter how much you plan, you can’t account for everything. 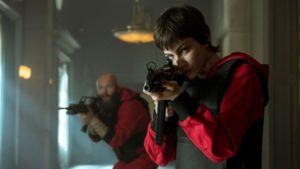 There needs to be some kind of sacrifice at some point. Audiences will find it hard to believe that all will go smoothly and everyone will get away scratch free. The odds are stacked against them. Can everyone really get away completely unharmed?

*As a heads up, here is where we will start to get a little less specific with our references in order to avoid spoilers.

Contemporary audiences are used to seeing characters dying (thanks Game of Thrones) and happy endings subverted. So it’s unlikely they’ll be convinced by a completely happy ending and a smooth journey for the protagonist and heist team.

The heist movie often has at its advantage though, a team of characters to choose from to sacrifice. But proceed with caution in this regard.

This isn’t a direct order to kill your favourite characters. But there needs to be some kind of tension in the protagonist and group losing something. Otherwise, the journey seems all too easy. 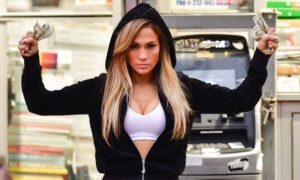 There has to be a moment where it seems the good guys have won. The police have the upper hand. There’s no way the gang can get out of this corner.

The plan has gone wrong, the unpredictable element has wreaked havoc, there have been some heavy losses. How will our heroes survive all this?

This is a plot point that quite directly mirrors one you would find in your beat sheet – the ‘Triumph of Evil/Hope is Lost’ beat. We need to give our characters a moment of unparalleled low, so that ideally they can then bounce back and reach an unparalleled high.

There’s no right or wrong way to carry out this part of a heist narrative. Either the characters will get through this low moment and survive/pull off the heist. Or they won’t. Either can be equally as convincing and gripping.

In Hustlers, for example, it’s not a spoiler to say we know the heist will come crashing down at some point.

But this doesn’t make Hustlers any less gripping. The thrill is in seeing how it comes crashing down not that it does. And the point at which the enemy appears to have won is even more crushing than if we had the sense the team might get out of it.

Bring your characters down even if you can’t bring them back up. It will make their story feel more empathetic and the conclusion all the more impactful either way.

So here we are. It’s all come to this. The plan hasn’t gone exactly to…well, plan.

But there’s one final way the gang are going to get out and pull off their heist. Or are they? Even if they’re going to fail in their initial aims, they will go out with a bang.

All the tension of the story will have been bottled up until this point, where it can finally be released. A shootout, a disguise and run, a near miss with the enemy, a final run for it. Our tension will be peaking here, so that it can be released and then settle in the conclusion.

A key element of this kind of final set-piece can also be to surprise the audience. Whilst we might have largely known the plan up until this point, one vital part of it will have been kept back. And here is when it will be revealed.

It’s a magic trick, a key piece of the puzzle which will be crucial to getting the characters out of a sticky patch.

The sweat levels have peaked, the tension released. Now breathe and enjoy the conclusion…

More often than not our heroes will get what they wanted. It might not have gone perfectly but they made it out the other side.

However, it doesn’t always work out (Dog Day Afternoon) and sometimes that success is ambiguous (Inception/Hustlers). Either way, there has to be some kind of conclusion.

In a heist movie, the happy ending can often seem less corny that it would do in another genre. Well at least, this is more likely to be the case if you have considered and included some of the aforementioned elements.

Moreover, the protagonist and team might have come to the realisation that the goal of the heist didn’t matter. Instead, they’ve gained something much more important along the way (love, for example).

When you look to write a heist movie, following the steps of predecessors can be vital to unlocking the tension and drama inherent in the genre.

Set a goal, make a plan and execute with the right amount of skill, ambition and caution of the potential bumps in the road. Remind you of anything?

The heist movie ultimately serves as the perfect metaphor for the writing process.

3 thoughts on “How to Write a Thrilling Heist Movie (or TV series): The 10 Perfect Steps”