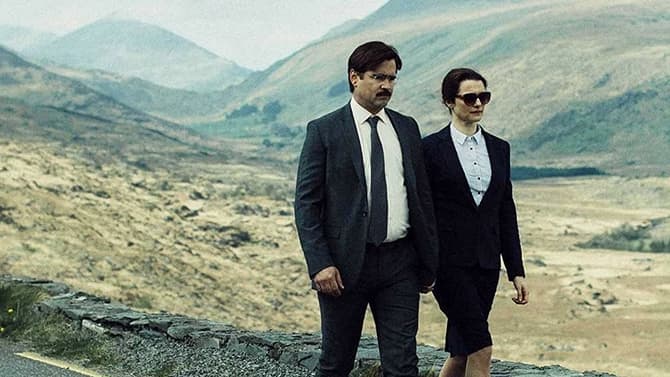 How to Write a Surrealist Film: The Core Principles of Surrealism

Surrealist film tends to fall far from the aims of the original Surrealist movement. This article will demonstrate how to write a film that is authentically surreal.

How can you represent surrealism in screenwriting? And what does great surrealism look like in cinema? We’re going to take a look.

The father of surrealism and author of the Surrealist Manifesto, André Breton, once argued that film viewers enter a state between being ‘awake and falling asleep’.

Think of the cinema. Spectators, sat in the dark, watch images flash before their eyes. The experience is often compared to dreaming.

And yet, Breton, inspired by Sigmund Freud’s psychoanalysis, didn’t see dreams as a distraction. Instead, they offered windows to a hidden subconscious and so allowed new ways of exploring our reality.

Much of contemporary cinema—indeed much of contemporary media—could be seen as visually ‘surreal’. Events that occur in everything from a mouthwash advert to a Marvel movie are surreal in the sense that they distort rather than mimic reality.

However, not many filmmakers are aware of the original objectives of the surrealist movement. Breton would likely be appalled that today surrealist tropes are used to reinforce, rather than to undermine, the current economic system.

One Listerine advert depicts a man swirling mouthwash. He subsequently spits it out. This prompts a huge blue wave to wash across a beach.

When Breton compared cinema to dreaming, he did not mean a daydream of another world. Instead, he tried to conjure a way of interrogating our own world.

In this article, we will focus on David Lynch‘s and Yorgos Lanthimos‘ films. Both filmmakers are still working today. They are rare because they use surrealism to challenge, rather than reinforce, the restrictions of society.

In short; this article will use the two filmmakers to show how to write a truly surrealist film. So what are the core elements and principles that make up a surrealist film?

Salvador Dalí, the famous surrealist artist, and Luis Buñuel, the similarly renown filmmaker, made one of the first surreal movies.

The most well-known shot in the film is this one: 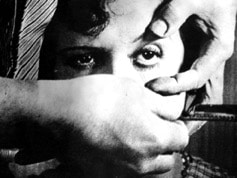 Even in the era of CGI, few images are as horrifying  as this extreme close-up of an eye sliced open with a razor blade. Dalí and Buñuel’s point was simple. In short, their surrealist movement was to boldly usher in a new way of seeing.

The image comes near the start of the film and so at least one critic has argued that it acts as a kind of warning. The subsequent action would speak not to our actual vision but to man’s subconscious.

Now look at this image from the end of Yorgos Lanthimos’ The Lobster: 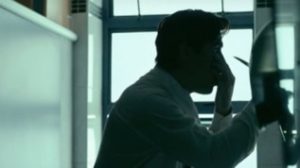 Again, a blade hovers in front of an eye. Like his surrealist predecessors, Lanthimos uses the image to indicate a new kind of seeing. So here is another director who speaks to the subconscious. 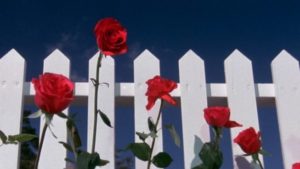 And now watch this scene from the opening of David Lynch’s Blue Velvet:

But then there’s a problem.

2) The Nightmare in Surrealist Film

So, when writing a surrealist film, horrifying characters or scenarios can prove an effective way of depicting the subconscious. Lanthimos and Lynch provide abundant examples.

First, let’s focus on David Lynch’s diner scene in Mulholland Drive. It is one of the most infamously nightmarish scenes in modern cinema. 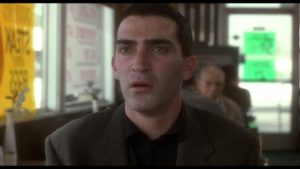 We all have similar nightmares. And yet, although this scene is a vivid depiction of a nightmare, it also something more.

Throughout Mulholland Drive Lynch suggests the ‘real’ world and the ‘dream’ world are much closer together than we often presume. Our dreams, our fears, and even our nightmares, bleed into our realities and dictate how we live our lives.

3) The Uncanny in Surrealist Film

Often surrealist filmmakers will utilise the ‘uncanny’. Freud defined the uncanny as:

‘That class of the terrifying which leads back to something long known to us, once very familiar’.

For Freud, things that look familiar but aren’t are particularly terrifying. He uses the example of a dummy or a waxwork doll. According to Freud, dummies are frightening because although they look human, they aren’t.

Think of the creature behind the dumpster in Mulholland Drive. It distantly resembles a human. It’s recognisable and yet simultaneously alien.

Blood and horror are now ubiquitous in contemporary cinema. And yet surrealist filmmakers are aware of the ability of the uncanny to shock above violence and gore.

For Breton, surrealism was intended to shock by rearranging the already known. So, traditional images were distorted or parodied. 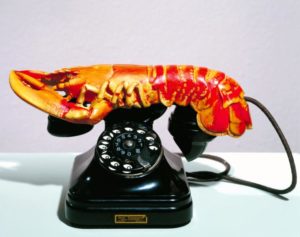 In writing a surrealist film, it is a good idea to incorporate uncanny elements. They have a real power to shock and provoke. And they might challenge audiences who are numb to explosions, blood, and gore.

Nothing is Quite Normal

Lanthimos’ The Killing of a Sacred Deer is a brilliant example of an uncanny film. Every scene in this movie imitates but then subverts audience expectation.

Over the course of the film, Martin’s presence grows increasingly menacing. From the start, we are never quite sure where to place this character. And he only becomes creepier as the plot develops.

The Killing of a Sacred Deer clip - “Three times more”

On first viewing, it’s likely that you’ll find the scene unsettling, but not be entirely sure as to why. Here are some suggestions:

Discussing hairy chests at all is, of course, incredibly unusual. Importantly, the discussion on hairy chests seems to represent something beyond itself, and yet it’s difficult to know what. Suggestions for what the hairy chests could mean:

However, perhaps the point is that there is no clear parallel for the hairy chest. It does not clearly represent anything. It’s a symbol that signifies nothing in particular.

Lanthimos subverts the audience’s expectations of understanding. We are left mulling over the ideas and images obsessively, in a desperate and futile search for meaning.

The Killing of a Sacred Deer | Official Trailer HD | A24

Crucially, when Breton refined surrealism in his second manifesto of 1930, he emphasised the need for application of the movement.

Most importantly, he wrote ‘everything remains to be done, every means must be worth trying, in order to lay waste to the ideas of family, country, religion’.

Both Lanthimos and Lynch use surrealism with a satirical edge. 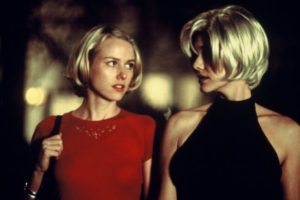 Mulholland Drive can be interpreted as a critique of Hollywood and the movie business. Lynch suggests that Hollywood is damaging both to the filmmaker as an artist and to individuals who fall for its constructed illusions.

A more developed critique of Hollywood, however, is shown in Betty’s (the film’s protagonist) narrative.

Hollywood, a dream factory, manufactures fantasies on screen. However, Lynch suggests that the fantasies nurtured in viewers off screen reveal a darker side to Hollywood.

Lynch uses surrealism to launch satirical hand grenades at Hollywood. For this director, big budget cinema has blurred the boundaries between what is real and what is not, with horrifying, deeply damaging, consequences.

The Lobster | Official Trailer HD | A24

In The Lobster single human beings, imprisoned at a luxury hotel, have forty-five days to find a suitable partner. If they fail, they transform into an animal of their choosing.

As with The Killing of a Sacred Deer, this film (deliberately) resists interpretation. And yet, a possible way to view The Lobster is as a sustained satire on contemporary relationship norms.

Firstly, the modern societal taboo on singleness is parodied in the mandatory requirement that all humans are coupled .

Second – bisexuality is banned in the hotel.

Third—the single individuals in the hotel bond over the most fatuous, superficial similarities.

And Finally – A Truly Surrealist Scene

To conclude, let’s analyse this clip from David Lynch’s Eraserhead:

This scene neatly (or rather— grotesquely) includes all the elements analysed in this article. That is to say, the clip is a great example of how to write a truly surrealist scene in a film.

A New Way of Seeing

Eraserhead was David Lynch’s first film. The movie ushered in a new way of seeing. Lynch’s surrealism revolutionised cinema. He has been labelled the ‘first popular Surrealist’ filmmaker.

Eraserhead, like all of Lynch’s best work, burrows into the viewers subconscious. Like Dalí and Buñuel all those years before, Lynch foregoes conventional narrative and writes dreamy, bizarre screenplays.

Perhaps the most Lynchian symbol in this clip comes at 4.27.

It’s tempting to interpret not only this scene, but the whole film, as a nightmare. The atmosphere is dreamlike. The room is dark in this scene. No-one says anything normal.

However, as with Breton, the nightmare does indicate hidden anxieties.

Above all, Lynch, as so often in his work, embodies human anxieties.

And this image is much more powerful and memorable than much of what we see on screen today. The reason for this is because it’s so uncanny.

Lynch, as ever, leaves interpretation to the viewer. But one way of reading this, given the quite violent ejaculation of liquid, is as a kind of sexual anxiety.

As previously mentioned, Breton, and the original surrealists, were fond of Freud. Their work tends to pulse with sexual references. Lynch, and particularly Eraserhead, follows their lead.

Once more in line with Breton, Lynch’s absurd scene is ripe for a satirical reading.

The film was made in the late 70s. So sexual attitudes, particularly among older generations, were less liberal than they are today.

Lynch highlights the absurdity of societal sexual repression by having the mother both lambast and encourage sexuality. The hypocritical mother is unable to keep to her own rules.

So, perhaps the filmmaker’s implication is that restrictions on sexuality are damaging and repressive for everyone—including those who enforce such restrictions.

Finally, there is much dark comedy in this scene. Above all, it’s hard not to giggle at the sheer absurdity.

Surrealism, from Breton onwards, has always been a movement that has emphasised the use of comedy. Think of the lobster on the telephone. Often things that are ‘uncanny’ teeter between amusement and fear.

‘Surreal’ is an increasingly common word in contemporary language. Bumping into someone we know at the airport is ‘surreal’. Being inside for the coronavirus lockdown is ‘surreal’.

It is important, however, when writing a surrealist film, to remember the aims of the original surrealist movement.

Write like Lynch and Lanthimos. Write surrealism with pincers. Don’t use surrealism as a stylistic choice. Use it to say something meaningful and powerful about the human condition.

format-boundary=”true”>This article was written by Charles Macpherson and edited by IS Staff.

2 thoughts on “How to Write a Surrealist Film: Learn The Core Principles of Surrealism”