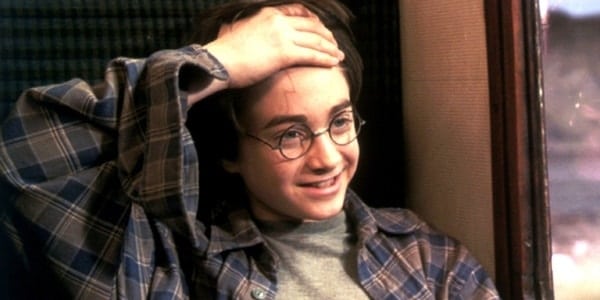 What is a Visual Metaphor? And How to Use One in Your Screenplay…

You want a screenplay to be entertaining but reflective and unique but relatable. You want the audience to connect. Using visual metaphors can be the key to unlocking this.

When used intentionally, visual metaphors can transform your entire screenplay. They add more than a little spice – they add depth and dimension.

They craft a richer, stronger story and they completely alter how audience’s relate, react, and feel.

Read on to discover what visual metaphors are and our three major tips on how to incorporate them into your screenplay.

What is a Visual Metaphor?

It can be tempting to just avoid visual metaphors altogether, confusion often surrounding what they even are to begin with.

Perhaps one of the most simplistic ways to understand it comes from Blain Brown who says :

“[It is] the ability of images to convey a meaning in addition to their straightforward reality. Think of it as ‘reading between the lines’ visually…”

Essentially, a visual metaphor is a concept represented by a visual image. Symbolizing something far bigger than the image itself, it is an incredible way to ‘show’ rather than ‘tell.’

It can communicate large, complex, emotionally charged concepts without dialogue and provide insights into relationships, context, and tone with just seconds of an image.

A more complex visual metaphor could involve a scene showing a man alone in the middle of a vast, snow-covered and barren field.

These are big ideas within just a single image. Even in screenwriting, sometimes words just aren’t enough.

Visual metaphors can pull a significant amount of weight. The visual has an impact even great dialogue can struggle to touch.

So what does a visual metaphor actually look like in practice?

Let’s take a look at a few different films to help us answer that question.

George Lucas’ cult classic coming-of-age film can offer some easy insight into what visual metaphors look like in practice.

In American Graffiti, the main character (Curt Henderson) recently graduated high school and is preparing to move to college.

The day before he moves to college, he attends a “Back to High School” sock hop where he finally gets to experience the school as an outsider looking in.

He roams the halls, looking around nostalgically before paying his old locker a visit. He tries the combination to it, but it never opens. It has been changed.

Following this scene, the camera shows Curt traveling away from this locker and shows him smiling. This is also a visual metaphor.

A fun, family-friendly film on the surface, Zootopia is rife with several complex themes. Visual metaphors carry these themes.

The first major metaphor in this film comes in the shape of the police badge and uniform worn by ZPD officers. These symbolize different things for the two protagonists and their meaning changes over the course of the film.

For Judy, the police bunny, they serve as a symbol for progress, equality, and opportunity.

For Nick, the conman fox, the police badge and uniform represent something different.

The badge and uniform are dynamic visual metaphors, though. Their meaning changes for Nick by the end of the movie.

Harry Potter and the Philosopher’s Stone (2001)

Harry Gets His Wand | Harry Potter and the Sorcerer's Stone

All the Harry Potter films are filled with visual metaphors. Three of the biggest are introduced in The Philosopher’s Stone – Harry’s wand, his scar, and the Mirror of Erised.

At the very surface level, wands function as a useful tool for magic. On a metaphorical level, the wands offer something more.

Harry’s individual wand represents a few things much more personal for him and his story.

The Mirror of Erised is also a major symbol within the film. 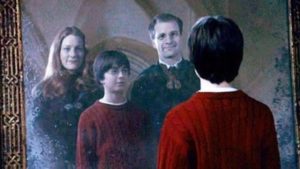 Putting Visual Metaphors to Use

Now that you’ve seen examples of how visual metaphors can be incorporated, it’s time to consider how to use them in your own screenplay.

While there’s endless ways to do this, here are three major things to keep in mind when implementing visual metaphors.

The whole point of visual metaphors is that they are a window into the screenplay’s subtext.

Think about what that is for you and your screenplay. What are some of your major themes, whether in the full piece or in one particular scene?

You need to have a clear image prior to developing your visual metaphors.

Once you have a theme (or themes) in mind, you just need to find opportunities where you can express these through imagery.

Sometimes those opportunities present themselves in more obvious ways. For example, look back to Harry Potter and the Philosopher’s Stone.

It just logically follows when you consider the events that create the scar.

Visual metaphors are great at communicating important themes without even saying anything. But they shine the brightest when they take on a more emotional significance.

Part of the beauty of these metaphors is that they open things up rather than close them down. Because they show rather than tell, things are more open to interpretation.

This is fantastic for your writing, because it engages audiences. The audience become invested in your work because a piece of them has become part of it.

By using visual metaphors, you allow viewers to step in and create their own individual meaning.

What does that all have to do with emotionality? Well, you can bolster all of this by prioritizing emotion in your visual metaphors.

Even the most immaculately constructed screenplays probably wouldn’t be very memorable if you took the emotion out of them. In other words, just give audiences something to feel.

Give your metaphor a symbolic weight. Whether you’re trying to emphasize fear, love, hope, anguish, or happiness, make sure to actively show it. 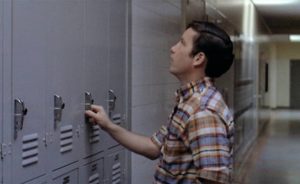 Good rule of thumb: mix up your use of visual metaphors.

It’s infinitely more compelling to have some that are static and some that are dynamic, changing meaning throughout your screenplay.

The latter can be more challenging to do properly, but they can be essential for displaying character growth or change.

To make things easier, use your act structure as a guide. In the best case scenario, it would be great to incorporate your dynamic visual metaphor once an act.

Once Upon a Time in Hollywood embraces a dynamic visual metaphor through the recurring image of Hollywood.

After the events of the movie though, the meaning behind the image changes.

The specifics of your own dynamic metaphor is up to you, although we also highly suggest having their symbolic shift occur at the climax of the screenplay for the most impact.

A visual metaphor isn’t just a powerful image to use on screen. It’s a vehicle for conveying the deeper meaning beneath your story.

Visual metaphors use the best of what screenwriting has to offer. They utilise the visual medium to speak to the audience directly and subconsciously.

When done right, an audience can leave a film/TV show reeling just from a single image. This is the power a visual metaphor can have, one image containing a multitude of meaning and reach.