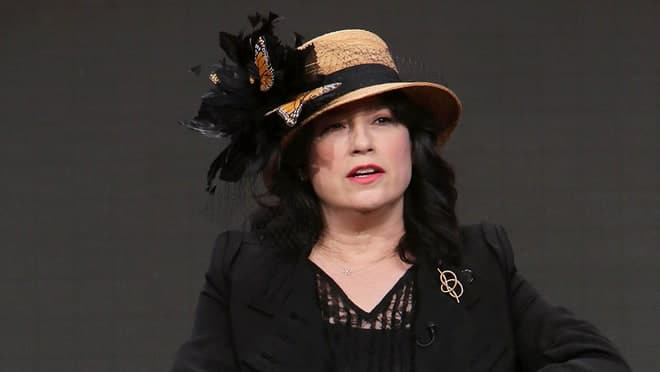 Amy Sherman-Palladino has no qualms with being known as a challenging artist.

Refusing to be bound by network limitations, her unique style has carved her out as a distinctive figure in the television landscape.

Originally planning to be a dancer, Sherman-Palladino’s career changed course in her 20’s when she took a job with her writing partner on the hit show Roseanne. This role kick-started her screenwriting career, winning her an Emmy nomination.

She then went on to create the dramedy series Gilmore Girls in 2000. The show’s rapid fire dialogue, pop culture references and warm mother-daughter relationship made it a cult hit. She left after the sixth season, but returned to write a four part revival in 2015.

In the meantime, she created Bunheads, which ran for just one season.

More recently, she was the creator of The Marvelous Mrs. Maisel, which she co-wrote with her husband, Dan Palladino. For this show, centered around a fictional account of a female stand up in the 1950s, Sherman-Palladino became the first woman to win two Emmy Awards for both writing and directing.

Here are 15 quotes from Amy Sherman-Palladino which share her wit, knowledge and experience of creating engaging TV story worlds:

1.  “You always start with your characters, like your main characters…who are these women, what are they to each other, what do they love…really it all starts from what’s your center and should go out from there.”

2. “Different is sometimes not the easiest thing to embrace but that’s true of life so if we want people to embrace more Melissa McCarthy’s and more complicated parts…we’ve gotta keep writing the parts, we’ve got to keep fighting the fights…anything worth doing is a fight.”

3. “Always make the big small and the small big. And it’s not about the plot, it’s about the people… The truth of what the characters are feeling has to be the most important thing you put out there.”

5. “The best dramas have comedy in them…The Wire had laughs!”

6. “There’s a constant wanting desire to have a formula, like this is the formula for a hit show, and I think if you talk to anybody who’s had any sort of success in a show, there’s no formula, it’s alchemy, the stars align and somehow the right person walked through the door at the right time.”

7. “People react immediately when other people talk. They don’t go, ‘Let me think for five seconds,’ before going, ‘I would like coffee.’”

9. “I feel like I see women falling apart on TV all the fucking time. I just want some woman to keep her shit together.”

10. “To be really good, you have to be willing to have everybody in the world hate you…People say, “Oh, Amy — great. Comes with a lot of baggage.” But my job is not to come to you and say, “How would you like me to do this?” I can’t fix your refrigerator. I have no skills — I can’t inject you with medication. All I can say is, “O.K., you’re paying me to create this world, craft this show, run this show, and if that means sometimes I have to say no to you to give you a better product, that’s what you’re paying me for.”

The Best of The Marvelous Mrs. Maisel's Stand Up | Prime Video

11. “All you have to do is respect the audience, because I don’t think network television was respecting the audience. If you just tell the audience, “We’re interested in more than just you buying an Audi. We would like you to laugh and cry and feel something and care about something and think about it once you turn your TV off,” that’s a great place television is in.”

12. “It’s lovely to be recognized but you’ve got to go by your own internal clock and you’ve got to have people around you that tell you when you’re off in la-la land that you trust.”

13. “I never felt like you should judge your work or your job by how many parties you get to go to.”

And Amy Sherman-Palladino on…Belief in Your Writing:

14. “If someone comes to you and says, “Well, do it this way,” it’s not being a dick to say, “Well, I don’t wanna do it that way.” It’s literally like, “The journey is this way. So you’re telling me to write something I don’t see.” And writing is not like millwork. It’s not like putting a car together, where you know if you put the wheel on the thing, eventually it’ll go. It’s a different thing. You have to see it, otherwise you can’t do it.”

15. “People make terrible mistakes in the fear of being fired and it’s better to be fired than to compromise on something that is going to destroy what you had in the first place.”