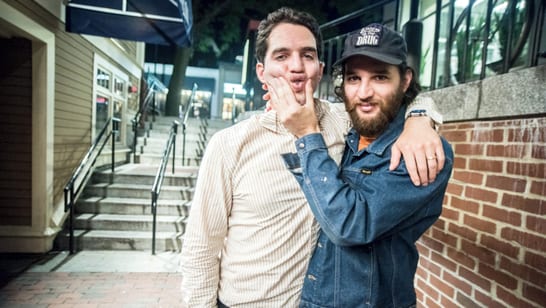 The Safdie brothers began making independent short films from a young age, drawing heavily from their disruptive childhood as two children of divorce.

Consequently, Josh and Benny have cited their film-loving father as a major influence for the ‘life on the edge’ underdog characters, which feature so prominently in their scriptwriting.

As a result, their films are emotionally evocative with a visual style that is adrenalised, claustrophobic, and orchestral. However, the visuals are married to incredibly human and flawed characters.

Furthermore, they present New York City warts and all, often using non-professional actors and shining a light on parts of the city not often shown in glossy movies and TV series.

In their burgeoning career so far the Safdie brothers are known for the films:

So we’re taking a look at some of the Safdie brothers most inspiring quotes about creativity, humanity and filmmaking. Whilst they might only be young, they have wisdom to share!

The Safdie Brothers on… Collaboration and work ethic:

1. “I guess the element of surprise caught people off-guard. The thing is, we make every movie like it’s going to please everybody. We’re like, ‘Everybody wants this itch scratched!’ ”

2. “I think it actually makes people feel weirdly comfortable when we’re fighting. I don’t know why, but it just does. At least with the crew we had, because everyone was so open. Fighting is a huge part of collaboration.”

3. “When spaceships travel to the end of the universe, they’re pointed towards Saturn, and then they slingshot around Saturn and it slings them off to another planet, and then it takes that gravity to go even further. So that’s the trajectory that it took. It wasn’t just a long straight path through nothing to get here.”

The Safdie Brothers Talk About Their "Heist Movie On Acid" (HBO)

The Safdie Brothers on… The nature of people:

5.“I don’t know many people who change – in particular, who change over a short span of time. That’s just not how life unfolds.”

6.“If you look at a flawed person and try to see who and what it is that makes them interesting, you learn more about people in general.”

7.“An underdog is always a winner, in my opinion. That’s who I’m rooting for, that’s why I’m interested in sports. I only root for the underdogs. Only. When we were kids, our dad would show us a lot of movies and he would always tell us that he was this character. They were always underdogs, they were always up against the world, and they always figured out a way. If not complete victory, somewhat of a victory – they got close to it and getting close to it is pretty good. I’m always inspired by it. I relate to these characters.”

8.“The movie (Uncut Gems) works because when Howard makes a wrong decision, it’s believable. There’s an element of understanding the flawed beauty and trying to see the uncut gem inside.”

9.“What is an ‘uncut gem’? It’s something that, on the outside is rough and maybe deemed without value, once you dig down underneath it, past the imperfections, the flaws, you can get at something that’s beautiful. I believe that you’re capable of finding that beauty in everything in life.”

The Safdie Brothers on… Style:

10.”Young filmmakers, you just need to find your voice. It took me a long time, I was imitating a lot of shit, but when you find it, it’s there. It’s like ‘oh, my god, that’s how I speak’. But now I’m realising it’s all about specificity. Thinking about every single thing that goes into a scene is very important. Why is the character putting this on? Did they throw clothing on in the morning, or did they spend time thinking about it? Did they think about it the night before? These are the things that change the way someone takes on their day.”

11.“I think that that immersive quality, that shoving the audience into the world, is a very unique experience that only exists in movies. With this in particular, we wanted to really put you in the subjective world of this thriller… and what is a thriller? A thriller is a work that ebbs and flows with the intention of when it’s going to release tension, and that tension release is actually when you learn the most about the character and the plot.”

12.“We kind of despise exposition, I’m never really that interested in it when it’s being spoon-fed to you.” “…It’s like if you see someone interesting on the street…you have to fill in the blanks, and that process of filling in the blanks is so exciting…That on top of everything else makes the narrative more interesting because you’re learning about somebody. You’ll grasp for the littlest glimmer that you get from them.”

The Safdie Brothers on…Connecting with the audience:

13.“I do believe that a viewer likes to take ownership of a movie, and they like to be engaged with it in that way, I think that not being so overt allows for that.”

14.“Those are the stories and movies that we want to make. The ones that you can’t just use words for, that you just kind of have to be there, to see it, to understand, to believe it – because words don’t have the nuance of it.”

15.“The whole point is for people to go home thinking it’s real.”