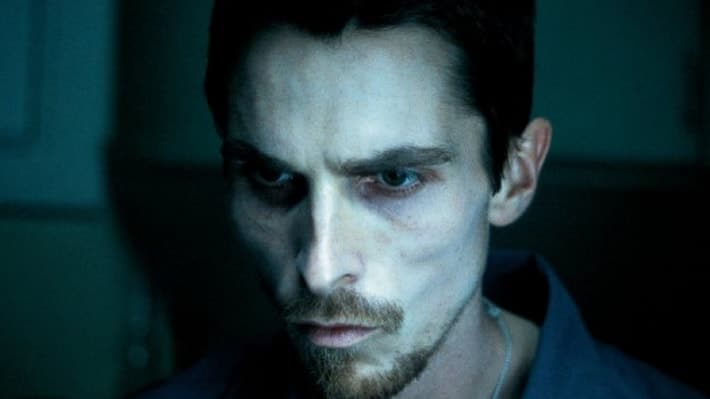 How to Write a Captivating Psychological Thriller

A psychological thriller. It’s a story that gets in your head and keeps you on your toes.

Psychological Thriller: ‘a thriller narrative that emphasizes the unstable psychological states of its characters.’

But to accomplish the task of getting inside their head and delivering surprises, you must first allow the audience to vicariously see the world through the eyes of the main character.

Achieving this connection will make for an unsettling experience. The thrills will be much more intense as a result.

In this article we will primarily be learning from Christian Bale thriller, THE MACHINIST, as we explore narrative tools and techniques for how to write a psychological thriller.

Keys to a Psychological Thriller #1: Identification and Empathy

Writers must achieve identification. That doesn’t mean that we identify with a character because we have experienced a similar situation to theirs.

Instead, we identify with characters because we have experienced similar emotions.

Most of us can identify with powerful emotions. We know what it feels like to have anxiety, fear, guilt, mistrust, or loneliness.

As a result, approaching your character’s pursuit of their goal from an emotional basis will allow for greater audience identification.

One way to achieve this is through vulnerability and externalising the main character’s internal struggle or fatal flaw.

Keys to a Psychological Thriller #2: Externalise the Internal Struggle

Show the internal struggle by creating an external weakness or vulnerability.

In THE MACHINIST, when we first see Trevor Reznik, he appears in the reflection of a window.

This motif is borrowed from Shakespeare’s MACBETH, where Lady Macbeth obsessively washes her hands in light of guilt.

Visually showing how a problem affects the main character will help create empathy from the audience. It will give substantial weight to the character’s emotional conflict.

Furthermore, it will create a tone in the imagery. Trevor’s paranoia is palpable because we are seeing it in action. The imagery dictates the tone.

In terms of the internal and external, psychological thrillers can be seen in the following way:

Keys to a Psychological Thriller #3: The Every-Man, The Every-Woman

Psychological thrillers tend to downplay spectacle in favour of character studies. The characters of the genre are typically not superheroes. Trevor is a machinist working in a factory, for example.

He is an ordinary person in an every-day setting. This allows for us to further identify with him. As a result, we imagine ourselves in this position and ask ourselves:

“If I was in this situation, what would I do?”

Consider finding the extraordinary in the ordinary. Take an everyday character an put them in situations that test their mental capacity. Therein lies the psychological pull.

What is the worst thing that could happen? And how will the protagonist cope and react?

10 Psychological Thrillers That Totally Messed With Your Head

Keys to a Psychological Thriller #4: The Truth Will Set You Free

Characters in a psychological thriller often function as a detective. They may not be a literal private eye. But they are frequently depicted carrying out some form of investigation.

The truth is often the solution to the problems of the main character in a psychological thriller. It is often the prize, the elixir of the inner journey; something that every great protagonist must have.

Three ways of attaining the need are having your main character:

Michael Hauge describes this survival tactic as the “Identity”.

“These characters’ subconscious minds create what I term an identity – a persona or mask that the character presents to the world to feel safe.”

Sometimes this mask is metaphorical (a way of behaving). Sometimes it is more literal. Either way the protagonist is hiding, from others and from the truth. 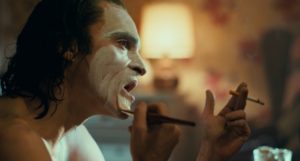 Keys to a Psychological Thriller #5: Safe, But Never Happy

Remember: a significant part of the psychological story takes place in the mind of the protagonist.

This identity acts as a form of armour and allows the character to be safe but never happy. It protects them from a wound that occurred before the story began.

Trevor’s choice to suppress and forget the car accident denies him the experience of feeling guilt. However, it does not come without consequences.

In shedding identity, the protagonist, in a sense, achieves their goal. But their real goal might not be achieved until their fake identity is shattered.

In a psychological thriller, the resolution doesn’t have to always be a realisation of the actual truth. The protagonist might have reached their own truth.

But their delusion has destroyed them. Therefore their story is finished. Alternatively, as in THE MACHINIST, they might have found a way out and forward. 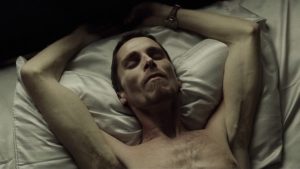 This is often a hallmark of a psychological thriller. Withholding crucial information gets your audience asking questions. Not questions rooted in confusion but curiosity.

In THE MACHINIST, for example, when disposing of the body at a cliff edge, Trevor displays paranoia by looking over his shoulder, spotting a flashlight in the distance.

As the wrapped-up body rolls down the cliff, Trevor’s reaction is one of surprise. But we don’t get to see what he is looking at.

Consequently, seeing the character react to situations in an abnormal or extreme manner can provide the audience with tension. This is necessary for the thrills that follow.

Tension followed by release. Like music. Control the delivery of information in order to surprise the viewer. Consider the questions your scene will raise. Then answer them at a later point.

“You can withhold information for unreasonable periods of time, and leave your audience saying, ‘Well, wait a minute. Why haven’t I been told that?”

Make sure you’re not withholding information just for the sake of it. Always try and do it in the name of building tension and keeping both the protagonist and audience on their toes.

The short-story writer Raymond Carver was known to keep a card on his desk with a quote from Chekov. It read:

“…and suddenly everything became clear to him.”

Carver remarked that this line was ‘full of wonder and possibility’. It encapsulates change.

Make use of this moment in your psychological thriller. Allow for your character to experience an epiphany moment.

This can be finding love, acknowledging a lost love, a discovery or an abandonment of faith.

The major reveal or twist should be surprising yet always inevitable.

You have permission to pull the carpet from out under the viewer, providing that there is a logical trail of breadcrumbs leading up to this point. We can achieve this with foreshadowing.

But it works because we have spent time uncovering a series of logical clues. Among these clues is every character with whom Trevor interacts insisting that they don’t know who Ivan is.

A common hallmark of the psychological thriller is the main character experiencing a sense of dissolving reality.

In THE MACHINIST, there is a feeling of unease and suspicion as Trevor has a conversation with the waitress in an airport cafe. It echoes, verbatim, a conversation that he had earlier with his call girl, Stevie.

The digital clock on the wall that repeats the ticking seconds, also adds to our sense of unreliability towards the narrator.

We know something isn’t quite right. This tension makes us wary. Anything could happen as everything may not be as it seems.

Remember, in the world of the psychological thriller, the character’s perception of the world is usually tainted and their sense of reality can often be distorted.

If we can’t trust the narrator, who can we trust?

Keys to a Psychological Thriller #9: A Trail of Breadcrumbs

Within a psychological thriller, foreshadowing will not only allow for the plot twists to make logical sense, it will also enhance the story’s themes.

In THE MACHINIST, at the carnival with Maria’s son, Nicholas, we see critical examples of foreshadowing. Here, Trevor’s conscience is brought into question.

This is Trevor’s approach to the innermost cave, the point of his inner journey where he must confront his deepest fears.

You must put your character in a position that involves them being face-to-face with their fears. But you must also give them the generosity of being able to make a choice.

This choice will either lead to them achieving their goal, or failing at the goal. The decision should not be an easy one though. This is part of the reason that makes it worth following.

The carnival ride culminates with a fork in the road, suggesting that Trevor has two choices:

He must make the right choice. As the automated car turns left, Nicholas endures a seizure and Trevor is helpless.

Having set up this moral dilemma and troubled subconscious, Trevor is seen driving down a highway at a later stage in the film. He has the option of:

Having previously witnessed the carnival scene, we are invested in this choice. The themes of the movie resonate more powerfully than if we had not experienced the foreshadowing.

In conclusion, writers will have succeeded in allowing the viewer to step inside the character’s mind, if the audience can identify with an ordinary person who is:

If you can show these narrative elements and provide tension through a controlled delivery of information, you will be on your way to creating a great psychological thriller.

Let’s look at the hallmarks of the genre in these psychological thrillers:

3 thoughts on “How to Write a Captivating Psychological Thriller”