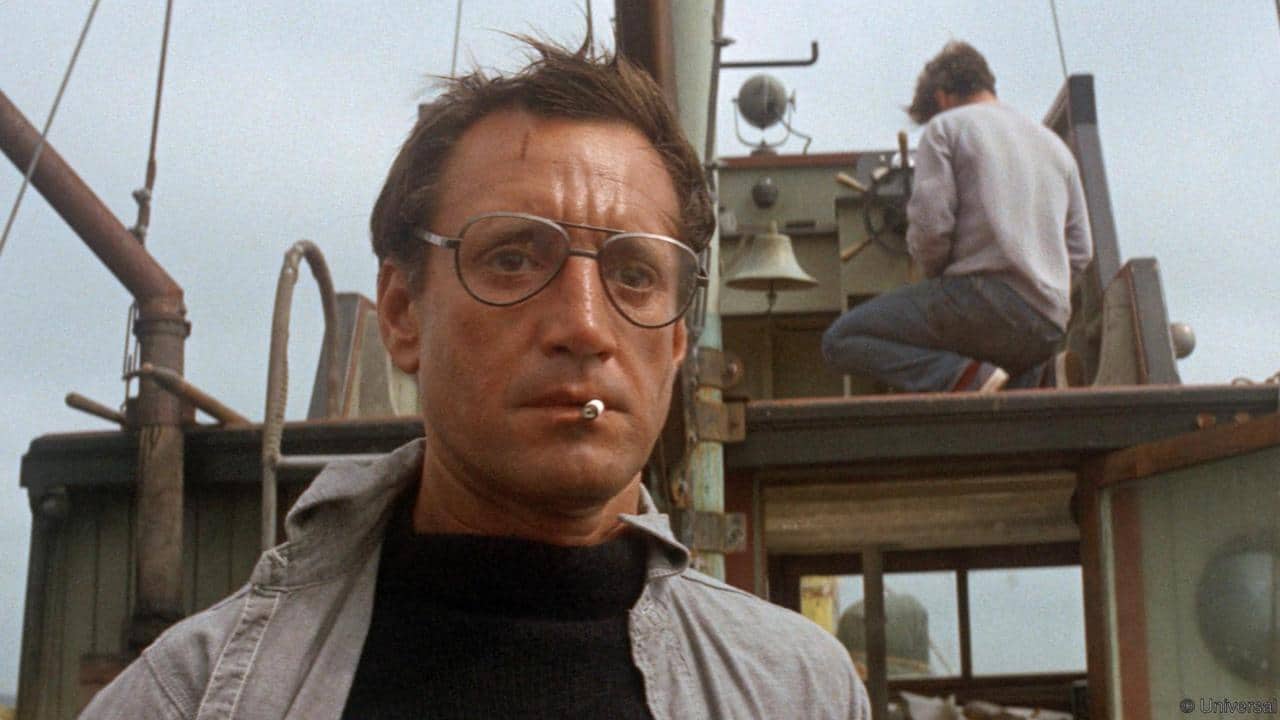 In our Genius Character Reveals series we examine scenes and moments where a film or TV show reveals a tremendous amount of character information in a compressed amount of screen time. This instalment focuses on Martin Brody (Roy Scheider), the police chief of Amity island in Steven Spielberg‘s JAWS.

After the success of Peter Benchley‘s 1974 novel Jaws, the screen version went through several phases of development.

Based on the strength of his television film DUEL, Steven Spielberg was chosen to direct. Benchley himself wrote several drafts, before Spielberg ultimately turned to TV comedy writer Carl Gottlieb.

Martin Brody, while present in the novel, was changed significantly for the film. A subplot about an affair between Ellen Brody (Lorraine Gary) and Matt Hooper (Richard Dreyfuss) was also cut from the script.

Who is Martin Brody?

Martin Brody is the new police chief of Amity Island, a summer resort town in New England, where he lives with his wife and two sons.

Ironically, he has a severe phobia of water after a near-drowning experience as a child.

How is Martin Brody’s character revealed by the action and dialogue?

A clock radio starts and an announcer describes the weather conditions:

Hayes Landing reports conditions good, with stripers and jacks. The Coast Guard has no storm warning from Block Island to Cape Hatteras; a light chop with freshening winds, continued clear and mild…

Martin Brody is already awake, sitting on the end of his bed. He asks his wife why the sun didn’t shine into their room before.

His wife Ellen, still sleepy, replies that they bought the house in the fall. It’s now summer.

She asks him to feed the dogs and where the kids are. Brody replies that they must be in the yard.

Ellen corrects him – in Amity, you say “yahd.”

Brody gets up and pauses in the doorway:

Downstairs in the kitchen, one of the children comes in, blood on his hand. He says a vampire bit him.

While Ellen fusses over his injury, Martin questions him. Was he playing on the swings? They’re dangerous. Brody is going to fix them soon.

The phone rings, taking him away from them. He answers:

What the hell do they usually do, wash up or float or what? Ah no, no, no, keep him there. Keep him there, I’ll be out in about fifteen… fifteen, twenty minutes. All right. Okay.

He makes his excuses: there’s a missing person. The season hasn’t started yet, so there’s nobody here. He leaves.

What do we learn about Martin Brody in this scene?

Martin Brody’s introduction features three small scenes in one. They establish him and his relationships with his wife, with his family, and with the town.

He’s awake before his alarm, ostensibly because of the sunlight, but more than that is bothering him. There’s no storm on the horizon (literally), so why can’t he sleep?

The Brody family have moved here recently, possibly from New York, and are still getting used to the place (the house and the island). Their accent unavoidably marks them as outsiders, although there’s a desire to assimilate, to fit into this community.

Neither parent is overly concerned with the whereabouts of their children. Both feel like the children are safe enough to play unsupervised.

However, Michael Brody entering with an injury immediately contradicts this sense of security. (A similar rupture happens later in the film on a beach full of playing children.)

The parents take different roles in addressing this mundane problem, both concerned in their own way. Ellen takes the role expected of a mother – nurturing and healing.

Martin is more investigative, not taking vampire as an answer but wanting to find out and solve the cause. He blames Michael for hurting himself.

You guys were playing on those swings. Stay off them, I haven’t fixed them yet!

Martin Brody is already aware that the swings are dangerous but has yet to do anything about it. Clearly, something is holding him back.

He’s scared that he might not be enough to protect his family, despite moving them to the small island community of Amity.

He answers the phone, although the audience only hear one side of the conversation. Brody asks the other person about what tends to happen in these cases. Again, he hasn’t been here long enough to witness this for himself.

At the same time, Michael asks if he can go swimming. Ellen sets the limit – Michael can go to the jetty and no further. In the back of the audience’s mind, we along with Brody are asking one question: is this enough?

Martin Brody leaves. His final comment to his family sets up some stakes and asks a few questions.

Nobody else is here, meaning more responsibility falls on Brody. Will he up to the task?

The season is yet to begin. Will this problem be resolved in time?

The summer season defines the town’s economy, its very existence. Later, Brody will clash with the Mayor over closing the beaches because of the shark attacks.

Why is this a great example of simple, effective screenwriting?

Spielberg’s filmography is full of fathers and father figures struggling to be responsible providers and protectors for their families.

In this opening scene, the script gives the audience a great deal of backstory about the Brody family but in a subtle way. Crucially, each line of dialogue reveals character.

We’re not just learning facts about the characters, but emotional information as well.

This introduction wastes no time. It shows three sides of this character and kicks off the plot with the inciting incident – the discovery of Chrissie’s body.