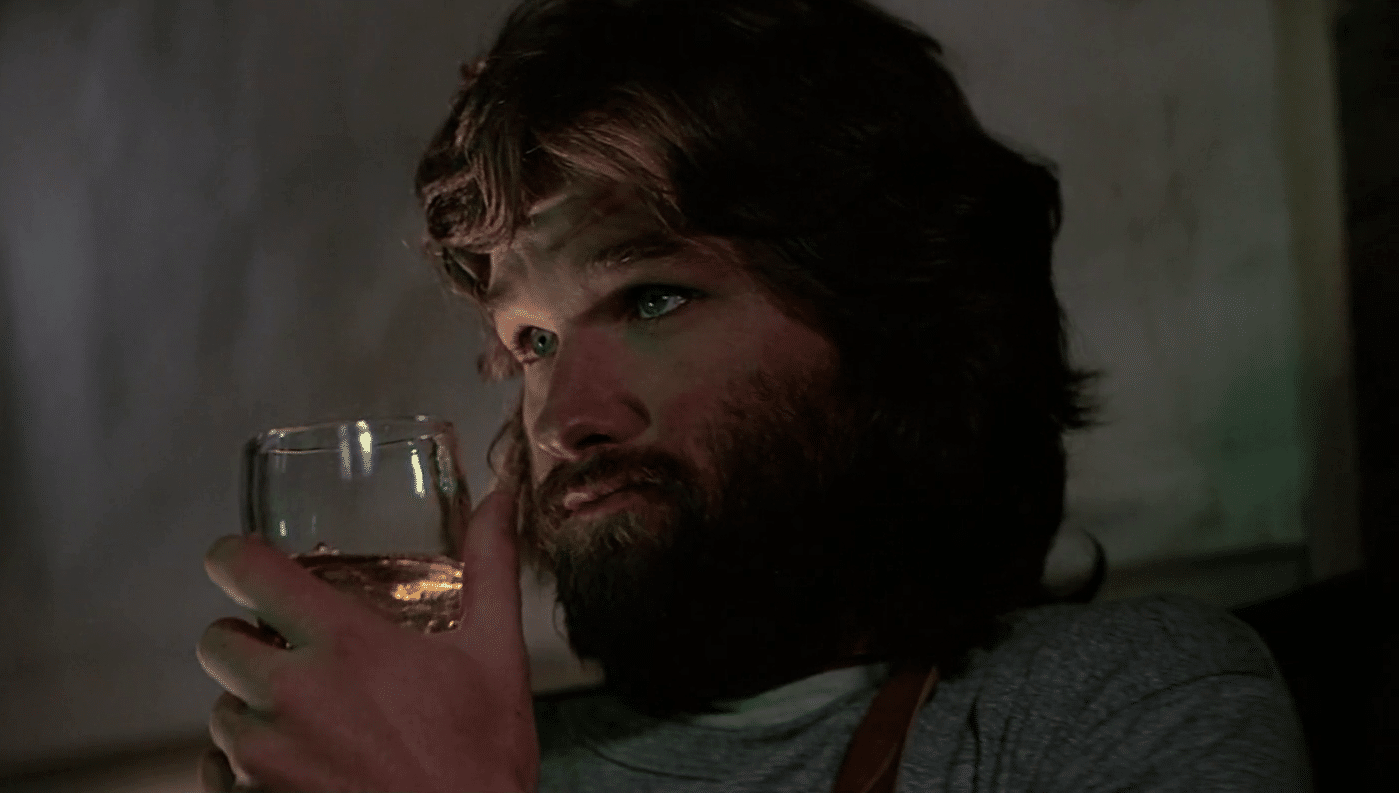 In our Genius Character Reveals series we examine scenes and moments where a film or TV show reveals a tremendous amount of character information in a compressed amount of screen time. This instalment focuses on R J Macready (Kurt Russell) the helicopter pilot besieged by a shape-shifting alien in John Carpenter‘s modern horror classic THE THING.

R J Macready and THE THING

THE THING has a long development history, but it was Bill Lancaster’s screenplay that made it to the screen. Horror maestro John Carpenter (HALLOWEEN) directed, bringing along frequent collaborator Kurt Russel to play the lead.

Adapting a novella that had previously been turned into a film by Howard Hawks in the 1950s, THE THING is about a shape-shifting alien that attacks a remote Antarctic station. It quickly becomes a fight for survival not just for them but, if they fail, the human race.

While a box office disappointment on its original release (in the year of E.T. THE EXTRA TERRESTRIAL, perhaps audiences weren’t ready for such a bleak depiction of alien life), the film is now a cult classic. It has gone on to spawn comic books, video games, a board game and a prequel film.

Rightly recognised for its gruesome gore effects, THE THING is also a masterclass in efficient, suspenseful writing.

Who is R J Macready?

R J Macready is an American helicopter pilot stationed at an Antarctic research station. Surrounded by scientists, he’s somewhat of an outsider. He’s gruff, no-nonsense, but very resourceful where and when it counts.

How is R J Macready’s character revealed by the action and dialogue?

Ice tumbles into a glass, followed by scotch. R J Macready takes a drink in his shack.

The face of a bored, bearded man, his arms crossed. He studies a computer screen.

A robotic voice announces checkmate. R J Macready has lost a game of computer chess. He opens the hatch for the chess program and pours his drink down it, producing sparks.

R J Macready is summoned outside and told he needs to fly the helicopter to the Norwegian base. He objects, saying flying this time of year is against regulations. Garry says Palmer has offered to fly. Macready protests that Palmer is too inexperienced.

Macready relents and flies them to the Norwegian base.

What do we learn about R J Macready in this scene?

THE THING opens with a mysterious, violent scene. A Norwegian man, flying a helicopter, tries to shoot a fleeing dog. He crashes near an American Antarctic base.

If Macready can afford to spend the day idly drinking, he must have less responsibility than the others. (This is confirmed later; he’s a helicopter pilot but he’s not supposed to fly in this season.)

Macready’s growing frustration with the chess indicates that he’s played many such games before, having run out of anything else to do. It also establishes his dry sense of humour.

While the drinking and the beard establish Macready’s macho credentials, the chess game establishes his intellectual side.

The script describes Macready’s shack as a way of describing his character:

A large Mexican sombrero hangs on his back. He is tall; about thirty-five. His shack is sparse but unkempt. A few centrefolds on the wall are interspersed by an occasional poster of some Mediterranean or South American Paradise.

He doesn’t really want to be here. It’s cold, and the only company is other men.

Macready’s competitiveness gets the better of him, although this is perhaps not truly a character flaw. He finds himself outsmarted by a higher intelligence. It’s artificial in this case, rather than alien, but both intelligences follow their programming: respectively, to win at chess and self-preservation by any means necessary.

His response is a blend of the stupid and smart, childish but at the same time asserting the dominance of practical, human ingenuity over a man-made program.

(In the script, Macready asks Norris for another chess program to replace the one he destroyed. The exchange is unnecessary, as it merely emphasises again how bored he is. It doesn’t appear in the finished film.)

– It’s against regulations to go up this time of year!

– Screw regulations! Four guys could be crawling around on their bellies out there!

– So, I don’t want to end up crawling around with them when we go down.

The argument about flying is also key for establishing a key component of Macready’s character.

It’s not that Macready is a stickler for the rules. Rather, he’s practical and sensible.

Later, when the group of men come under siege, other characters start losing their minds as well as their bodies. Macready keeps his cool though.

However, his pragmatism cuts both ways. He’s merely the pilot, and as such he doesn’t have the authority to prevent Dr. Copper et al from leaving the compound. Still, he knows they stand a better chance with him at the controls of the helicopter, and so he capitulates to their demands.

The rifts between the characters have already begun, and Macready’s response here gives an important indication of how he’ll respond to them later.

The script for THE THING has to solve a tricky screenwriting problem. The first few scenes need to introduce a sizeable group of characters all at once and focus the audience’s attention in on the lead.

The script finds a solution by first introducing Macready alone and then showing how he fits into the wider social dynamic. Macready looks like a classic hero, almost out of a Western. He acts like one too, as if he only cares about himself.

However, this is a mask. Macready is actually willing to put himself in danger for the safety of others, even when they oppose him.

In many ways, this is the epitome of heroism, and the opposite of the creature that destroys and impersonates anything in its way in order to survive.

If you enjoyed this article, why not check out our article containing the Genius Character Reveal of Rebecca Bunch (Crazy Ex-Girlfriend)?