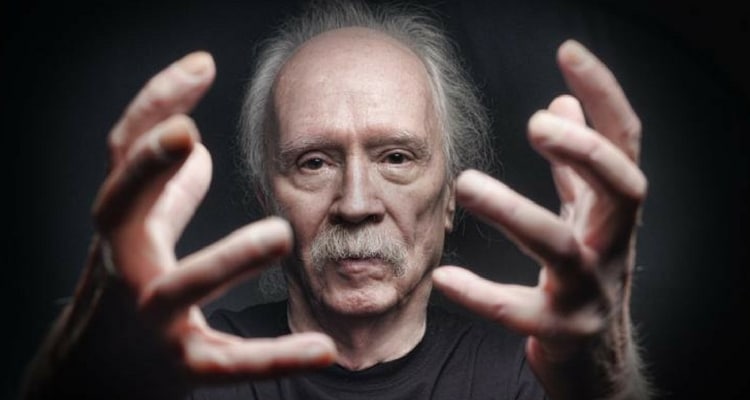 John Carpenter entered film wanting to make cowboy films.  He claims that horror as a genre found him, not the other way round.  Ironically, though, his enormous career hasn’t featured a single feature length cowboy film, with Carpenter establishing himself as a “brand” writer-director largely in horror and sci-fi. Here are 15 John Carpenter Quotes that shed light on his extraordinary career, and that screenwriters and film makers can learn from.

1. “I don’t want to be in the mainstream. I don’t want to be a part of the demographics. I want to be an individual. I wear each of my films as a badge of pride. That’s why I cherish all my bad reviews. If the critics start liking my movies, then I’m in deep trouble.”

3. “Everyone who ever made a low-budget film was influenced by NIGHT OF THE LIVING DEAD”.

4. “One could make money and get a career going with a low-budget horror film about killers attacking on holidays. It is always flattering to have somebody copy you.”

Top 10 John Carpenter Movies
5. “There are two different stories in horror: internal and external. In external horror films, the evil comes from the outside, the other tribe, this thing in the darkness that we don’t understand. Internal is the human heart.”

6. ” THEY LIVE was made in response to the Reagan years.”

7. (On why he passed on FATAL ATTRACTION). “There wasn’t a grain of originality in it – it was PLAY MISTY FOR ME with Michael Douglas filling in for Clint Eastwood. Also, the original version, the script I read, had Glenn Close winning in the end by killing herself and thereby getting the moral upper hand. I knew the audience was never going to buy that. The audience was always gonna want to see the wife shoot the bitch. Sure enough, they shot the original script, previewed it, got booed off screen and went back and shot the ending you see today. That was a journey I couldn’t be bothered to go on.”

8. “What scares me scares you. We’re all afraid of the same things. That’s what makes horror such a powerful genre. All you have to do is ask what frightens you and you’ll know what frightens me.”

9. “In HALLOWEEN, I viewed the characters as simply normal teenagers. Laurie, Jamie Lee’s character, was shy and repressed. And Michael Myers, the killer, is definitely repressed. They have certain similarities.”

10. “The strongest human emotion is fear. It’s the essence of any good thriller that, for a while, you believe in the bogeyman.”

11. “Evil hiding among us is an ancient theme.”

12. “Directing is about storytelling. It’s not about equipment or anything else.”

13. “Fears are all psychological. Being afraid of death, loss of a loved one and disfigurement are all powered by your mind. That’s all powerful stuff.”

15. (On HALLOWEEN 3: SEASON OF THE WITCH) “We found that the audience didn’t want different stories. What they wanted was just the same old thing over and over again. (The producers) got mad because they thought I’d destroyed their franchise. They took it out of my hands and I was done with HALLOWEEN.”