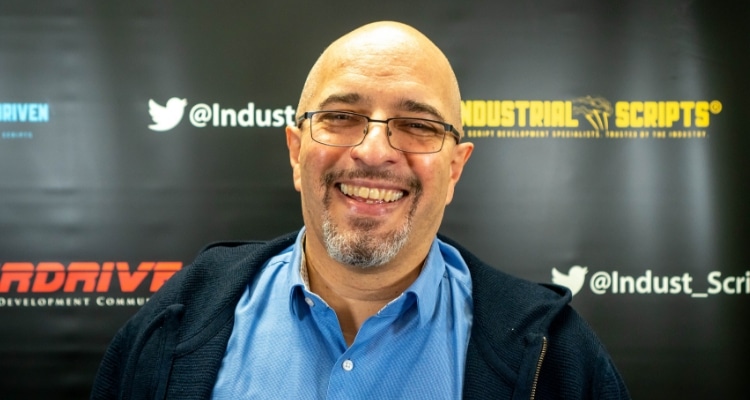 started his career as a writer on HAMISH MACBETH, starring Robert Carlyle. He went gone on to create two hit TV series, first creating and writing the award-winning and long-running ITV show DOC MARTIN, starring Martin Clunes, which has also been remade in Germany, Spain and France. He created and wrote BBC’s ROBIN HOOD, also serving as executive producer and showrunner for the first two series. With Sarah Berdssall, he produced Island Pictures’ film adaptation of THE SCAPEGOAT (2012), based on the novel by Daphne du Maurier.

He is also executive producer and showrunner of KNIGHTFALL for A&E Studios and History.

What’s an average week, if such a thing exists, for you?

You did prep me for this question. I didn’t have an answer for that and I thought, I’ll probably think of one on the night. But I don’t really have a typical week at all. If there’s a show on, then those people who are writers and producers will know that you’re just doing that all day and all night. I suppose I love and crave the intensity of it.

Then I’m desperate not to be ruled by a show, so when I’m not being ruled by a show, which is the case at the moment, I want to get up a bit later than usual, make a nice coffee, think about things that interest me, go online and be annoyed about Brexit, and then read at least one of the scripts that someone’s sent me four months ago that I still haven’t read, and then do two or three meetings and some emails, and then the day’s gone.

I remember when I was starting out as a writer, hearing on Radio 4, I think it was Geoffrey Archer in one of those loved-up interviews in which he said he wrote 5,000 words before lunch and then he went to Claridge’s and had a marvellous time. I thought I could never be that, if that’s what you have to do, be mechanical about it and write so much by lunchtime and then go out and meet people and live the life of a writer, and then get up the next morning and churn out stuff.

And I was so tortured by it. I’ll never be a proper writer!

And then I had been script editing on a show, HAMISH MACBETH, and was pushing hard because I felt like I had something to contribute, to join the writing team and not just be the script editor.

After many battles with the producer and production company, I became a writer on this show. And I wanted to think of myself as a colleague of the other writers who were all established, and we were staying in a hotel somewhere in Scotland, and I came downstairs for dinner the first day of my writing career, effectively, and I wanted to be part of this thing, and these guys weren’t hugely excited by the idea of me jumping in!

But they were fine, and there was one guy in particular who I wanted to ask about his process, because I was so worried about being disciplined in my day and still being creative.

So then I asked, “do you just write immediately at 9 AM?” And he said, “yeah, yeah. You know, I make a cup of tea, and there’s some post there” – this was the days before the internet – “I read my post and reply. So I wouldn’t be writing right away at 9, but after an hour or so.

And then I’d get a coffee…” and then what about lunch? “No, no, OK, I do have a break for lunch.” And I kept asking, because I really was genuinely trying to visualise his day. I need to be like this guy here, I really respect this writer. If I told you his name he’s gone on to be a very very successful writer.

And he said, “oh, I can’t keep it up! I do go between 9 and 6, but if I really write for 45 minutes in that day, actually writing pages, that’s a good day.” And I felt so grateful to him and so relieved, because I felt there was hope for me. And of course the reality, when you’re working as a production, sometimes you have to write a whole script in what feels like overnight.

On the last show I did, I wrote the final two episodes in ten days. And sometimes you’ve got to pull it out of the hat when you’re really tired and have the flu, and the world is screaming at you, and those people giving you creative notes are against you, and you have to be able to really do it.

But when you’re not under that pressure, I think it’s actually quite hard to discipline yourself. It’s not necessarily wrong that you don’t get 5,000 words done before you get to Claridge’s! And I think it’s important not to pretend that you do. And it’s not that I waste my days, but they aren’t easy to quantify and explain. So that’s the long answer!