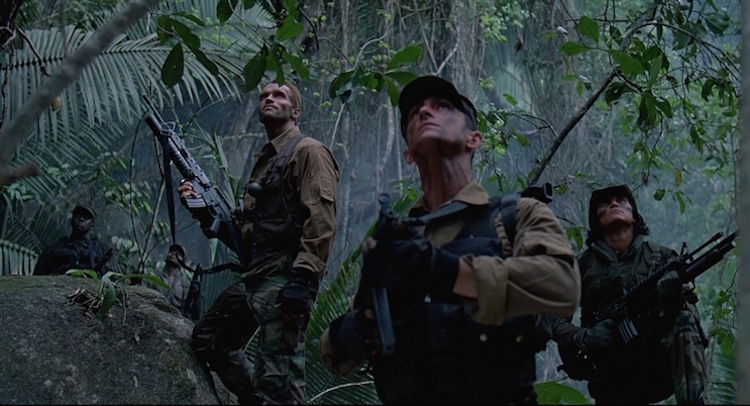 For much of the 80’s and into the 90’s, “Schwarzenegger” was a byword for a movie with a high body count. The box office was peppered with movies such as COMMANDO, TOTAL RECALL and TRUE LIES, which would draw as much attention for the dozens of onscreen deaths as for their creative merits or failings. Indeed, it was a stock criticism of 1980’s action movies that the body counts were as inflated as the physiques of the leading men.

The body count issue became such an integral part of Schwarzenegger’s image that as he tried to reposition himself in anticipation of a political career, many of the Austrian’s films in the 90’s took pains to show him not causing any deaths. It went so far that for a TERMINATOR 2: JUDGEMENT DAY trailer, Carolco and James Cameron shot an alternate take of a scene, in which Arnold swears not to kill anyone while staring down the barrel of the camera. TERMINATOR 3: RISE OF THE MACHINES ties itself in knots to bring back the “bad” T-800 while exonerating Schwarzenegger himself from any blame.

To assess whether Schwarzenegger’s legacy of frivolous death is fair, it is worth considering 1987’s PREDATOR, one of the most celebrated films from his era of box office dominance and one of the so-called “Holy Trinity” of modern monster movies (along with THE TERMINATOR and ALIEN). PREDATOR is in some quarters best-known (and wrongly dismissed) for excessive and flippant violence (the camp attack, “Knock knock”, Old Painless, “Stick around”, etc.), and megawatt machismo-overload (“I ain’t got time to bleed”, the chopper intro and its “godamn sexual Tyrannosaurus”), so it is as good an entry point as any for this purpose.

So what can screenwriters and filmmakers learn from the structure and pacing of PREDATOR?

Like the nerds that we are, we timed the death sequence, and here’s what we learned…

The graph below illustrates the timings of the deaths. Note: that the camp attack sequence has been deliberately undervalued so as to retain some perspective in the graph; one online count has the deaths as high as eighty in those few minutes, a more reputable source places it around forty-five. For the sake of the graph’s usability, we weighted it to occupy approximately half of the deaths in the film. 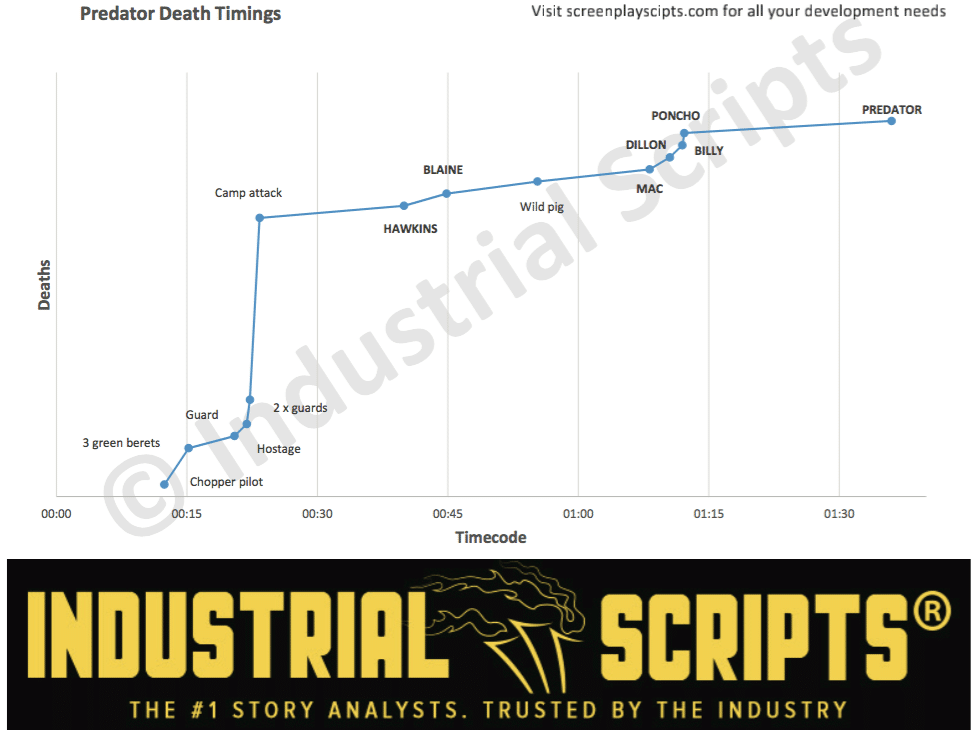 Most clearly, the graph shows that the second half of the film is not a bloodbath – with the exception of the Predator itself, there are barely half a dozen deaths in the last hour of the film, and one of those is a wild animal. In contrast, during the first twenty minutes of the film we are made aware of eight deaths even before the camp attack sequence kicks off in earnest.

This marked shift in the rate of deaths matches the change in the genre of the film. PREDATOR opens as a military movie, a DIRTY DOZEN-style romp of men on a mission, in which the antagonists are faceless cannon fodder, falling like dominos before our heroes’ superior combat prowess. Around the forty minute mark, however, PREDATOR metamorphoses into a reworking of TEN LITTLE INDIANS, as Schwarzenegger and his men realise they are being hunted.

CRANKING UP THE TENSION

The loss of each subsequent character is much more deliberately marked, even pored over, as the menace of the big bad is built up and reinforced before the final showdown. Finally, once we are left with just Schwarzenegger and the Predator, the film becomes a cat and mouse game between technology and resourcefulness.

That said, there are parallels in the pacing of the first and second acts of the PREDATOR script. As the graph illustrates, the rate at which deaths occur increases to a crescendo as the film approaches the climax of the commando mission, and again the deaths come faster as the threat of the Predator comes home to roost among Schwarzenegger’s team.

This serves in the first act to show us how unflappable and effective the commando team are as soldiers, unfazed by the gruesome demise of the green berets, and efficiently despatching hordes of goons in between quips. In the second act, this ratchets up the tension as our protagonists appear unable to get the measure of the unseen, unknown enemy, much less get the better of it as the noose tightens around them.

The film’s sudden – and brief – bursts of death give the narrative a jagged, volatile, unnerving element.

Director John McTiernan cleverly exploits the death count in the PREDATOR script, by not revealing the deaths to the audience in the manner one might expect. For a film with a body count in high double figures, outside of the camp attack sequence very few deaths occur onscreen: The chopper pilot, the green berets, Hawkins, the wild pig, Billy, even the Predator itself – none of these characters’ final moments are seen explicitly. The film’s sudden – and brief – bursts of death give the narrative a jagged, volatile edge which unnerved (and continues to unnerve) audiences – there is no real rhythm.

“Even Sonny won’t be able to call off Luca Brasi…”

Another intelligent aspect to the PREDATOR narrative is its use of “the Luca Brasi trick”. Named after the Corleone Family’s feared enforcer in THE GODFATHER, Brasi is firstly positioned as their primary physical weapon (“even Sonny won’t be able to call off Luca Brasi” boasts Tom Hagen), and then is deliberately dispatched far earlier than expected. The result? Instant tension injection as the audience collectively speculates: “the Corleones are in real trouble now”, and also wonders: “how are they going to get themselves out of this mess without lethal Luca?” Tension and dramatic intrigue, on a plate.

PREDATOR takes a similar approach by firstly positioning the mighty Blaine in super-heroic terms (he wields a giant gun normally reserved for helicopters and land vehicles, he claims he’s a sexual T-Rex, is heavier even than Arnie, and doesn’t even notice when he’s wounded), then swiftly pulling the carpet out from under both him and the crew when the PREDATOR dispatches him with ease. With a fired-up Blaine still in the ranks deep into the second half of the film, one can only speculate who else might have lived. But the PREDATOR picked him off early, and the film is all the better for it.

THEMES OF INVISIBILITY AND CAMOUFLAGE

McTiernan’s directorial sleight of hand matches the film’s own themes of invisibility and camouflage. This keeps the audience guessing as to the true nature of the enemy, in similar fashion to the invisible shark of the first two acts of JAWS, or the largely unseen xenomorph of ALIEN. This also means that the rather outlandish premise (an alien hunter comes to Earth for sport) is drip-fed to us, first with the infrared and the mimicry, gradually revealing elements of the Predator character leading up to the final unmasking. 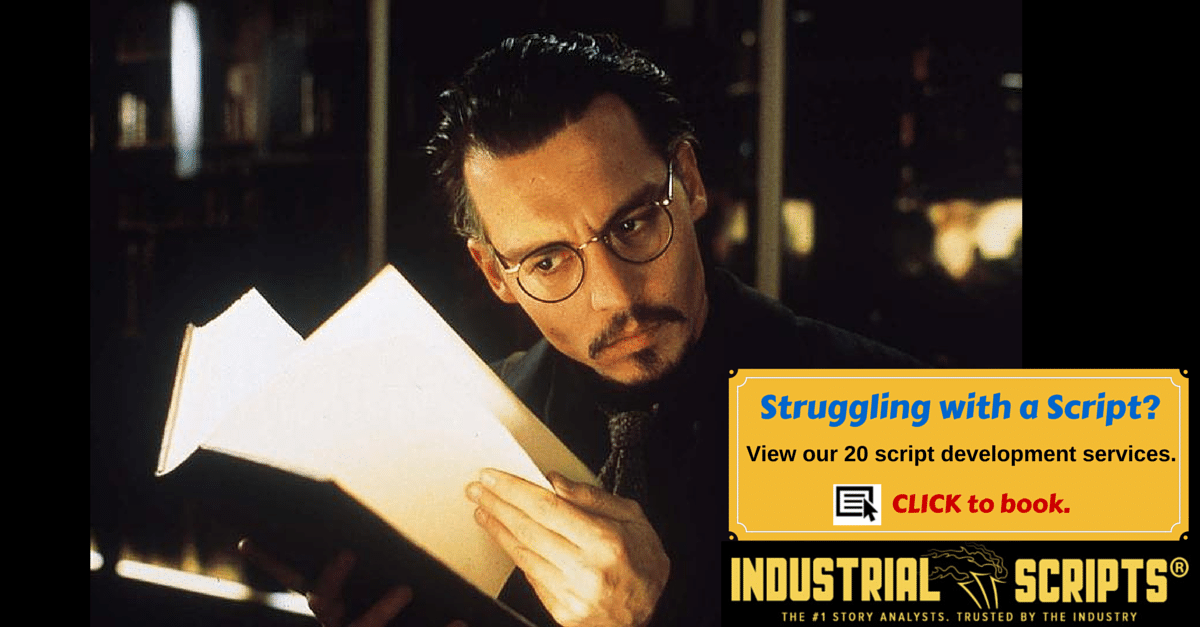 The crescendo of death employed by writers Jim and John Thomas in the PREDATOR script are a well understood technique which has been employed time and time again in action screenplays, as far back as WHERE EAGLES DARE and ZULU. However in this film, these accelerations do not ferry the drama to conclusion, rather they generate a tension between the first and second acts of the film which is to be resolved in the third act.

The script dispenses with the camp attack, the most significant element of violence for its own sake, in the first half hour. It is made abundantly clear in the moments after Blaine’s death, when Mac literally mows down a forest, that near-limitless ammunition is not an effective weapon against the team’s new enemy. This is perhaps the turning point of the film, when the movie shifts from visceral military fantasy to something more compact, primal and tense.

The film shifts from visceral military fantasy to something more primal and compressed.

So, hopefully even sneering purists don’t lump this bona fide classic in with the RAMBO IIIs of this world, because making an action film this good, is far beyond the reach of most filmmakers. Ultimately, while the tropes may appear routine, their delivery and exploitation is firmly not. They serve to position the movie before realigning expectations, rather than as an easy route to escapism.

Want to relive the carnage? Watch all the death scenes in PREDATOR on YouTube.

PREDATOR is a deft, original and hugely nimble piece of action writing, begging the question why the Thomas brothers (Jim and John) – a couple of relative unknowns before writing this script – never wrote anything as good or as beloved again…

Get to da choppah!!